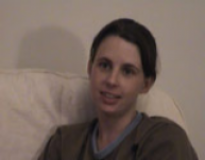 Was referred to a psychologist who helped her understand how stress increased her pain and taught...

Was referred to a psychologist who helped her understand how stress increased her pain and taught...

We went through different things that we had to, we did a diary, when I was at uni and a different environment, where we had to, I kept a diary on a daily basis. Everything that I did had a scale of say one to ten or one to five and what those things, you know, let's say walking down the street and I put five or whatever and what I did and what things made me worse, in what ways they made me worse and then I'd go back to my meeting, which was once a week, with the pain psychologist and we'd go through the diary and she'd say 'How, when you did get to that level, how did you get through to cope?'. So, if it was on a scale of one to five. How did you cope when it was level five?  What did you do? And then she would suggest such things that may enhance what you did, like breathing through, breathing techniques.

One thing that she did actually was explained how pain is interpreted by the brain, so they use a, one thing that sticks in my mind, they used the simple terminology of a pain gate in the lower back that opens and closes according to your psychological interpretation of pain I think. And what opens that pain gate, so if you're feeling more emotional, you're feeling less able to cope on a certain day then, for example, that may open the pain gate so the pain may seem worse. Which I don't want to sound like it's kind of all psychological 'cos some people might interpret it that way.

But sometimes pain can be interpreted worse because you feel bad and some people, you know, and that can be intimidating for some people I think, because if you feel that your pain's made worse by your emotions and things, sometimes you worry that people think you're do lally rather than there being something actually wrong. But there is the terminology, that this is what the pain psychologist explained and how, you know, these sort of things may affect it and what you can do to counteract those'

Had to stop her medication in the first 12 weeks of pregnancy.

Had to stop her medication in the first 12 weeks of pregnancy.

View topic summary
SHOW TEXT VERSION
PRINT TRANSCRIPT
The first twelve weeks I had sickness and all the things that go with it, which was fantastic, but pelvic pain, lower back pain, I'd had to come off of all my medication. So there I was back to, you know, agony basically. In the sense that I'm in pain every day, but it was different control of pain, taking medication to help pain, but didn't actually take the pain away but made you able to live. So I was in pain, so I was bedridden.

From twelve weeks I was able to start taking co-codamol and amitriptyline again, which was absolutely scary as anything because all I was worried about was this baby I was having. And then I was in and out of hospital from seventeen and a half weeks right through to the birth for weeks at a time and the rest of the time I was bedridden at my parents' house on the basis that I was bedridden at my parents house otherwise I was in hospital, that was the compromise. And then I gave birth to my daughter, happened naturally, great, epidural though, I was a wuss, I had my daughter, which was fantastic.

Doesn't use a wheel chair because she doesn't want to become reliant and prefers to keep active.

Doesn't use a wheel chair because she doesn't want to become reliant and prefers to keep active.

View topic summary
SHOW TEXT VERSION
PRINT TRANSCRIPT
Like using a wheelchair or you know, yeah, people have not I think, not medically because medically they like to keep you as mobile as possible for as long as possible. I think it has been possibly suggested to do certain things but you know it's one of those things again isn't it, like making an awful lot of people's lives so much easier if they just bite the bullet and just get in a wheelchair and do it. But in another way, if you said no.

The thing is if you stop isn't it. If you stop doing something that's hard to do it becomes even harder the next time you try and do it. But that's not to say a wheelchair is wrong. It works for some people. I just don't know. If I had to say, I needed, really had to do something but I really couldn't do it, and that was my, well you know, my instrument, but it was something that was going to help me achieve what I really had to do, then obviously I would do it if I really needed to, you know the place it is, at the level of importance.

Worries that she can't pick her daughter up and has noticed that she will only play rough and...

Worries that she can't pick her daughter up and has noticed that she will only play rough and...

View topic summary
SHOW TEXT VERSION
PRINT TRANSCRIPT
It does worry me how it affects my daughter a lot because, you know, I can think to myself that I'm not affecting her but kids are so perceptive and I know for example, and even more so at the moment because I've been in hospital and been particularly bad over the last few months that she doesn't come to, she won't, she does sometimes without, when she doesn't think, but if she thinks about what she's going to do, she doesn't ask me to pick her up, she'll ask somebody else to pick her up because she knows that I can't or I do and it hurts me and I, you know, or she'll pick up a reaction.

So that's in effect mummy in my mind my, you know, my daughter doesn't feel that I can pick her up. You know, it's something so simple, but it's huge I mean, you know, between a mother and a daughter or you know, any sibling, I think that's quite big.  And playing, like all her rough play, all the, all the things you know, the rough play is so important, you know roughing and tumbling and running and jumping and pretending, even just pretending to be an animal, like jumping up and down like a frog on the floor, which she loves, and pretending to be a lion and crawling around on the floor which she's fantastic at and she loves improvising.

She doesn't even try to initiate it with me, she waits till daddy gets home and she'll do it with him. You know, so there's effects or, you know, there's something going on that's obviously, I mean I don't know how it is if you can perceive it as negative but I don't like it, you know because it's out of my control and she shouldn't, I don't believe that, well I'd like not to believe, that she would even know that there's anything wrong.

But she's 21 months and those little things that I can pick up on at the moment, she's obviously, she's been influenced or there's something going on that's affecting my daughter, enough for her to not act the way that she wants to act with me or the way that I would like her to act, or perceive a child should act with her, with her mother.

Suggests that it is important to hear negative as well as positive accounts on the internet.

Suggests that it is important to hear negative as well as positive accounts on the internet.

View topic summary
SHOW TEXT VERSION
PRINT TRANSCRIPT
I mean, you know when I've come, like I say, when I read the Endo' thing, it made such a difference to hear somebody else and though I don't want to sit here and be negative and negative and negative because it is awful, you know, I could, that's too simplistic a language for how awful it is you know to feel as bad as I've personally, you know, in my personal experience feel.

But... and you don't want to, I don't want to be negative about it because people need to be positive at the same time because otherwise it's, there's no point. How do you get through tomorrow if you are going to be negative. Even though everything in your life feels negative, not everything but, you know everything feels negative because it's so hard. You need, their needs without being people who are ill, you know I hate flowery nurses who give me positive rubbish in my fa.., you know, who absolutely know absolutely nothing about how you are feeling and they just try and cheer you up and you, you know, feel absolutely awful and nothing they say is going to make you feel better.

But having information available that of all sorts hits of everything of positive and negative I think reaches a person at the, you know, at the right time, can make a huge difference to them. If they are looking on the internet, you know and they feel particularly positive about something and they read it, and somebody else felt positive about that thing it could be profound.

And the same thing about feeling negative about something to be reassured because somebody else felt negative is as equally profound because it is reassuring that you are not going completely bizarre or potty. I think all of it is really important. Really, really important.

You know and I'm rubbish at using support groups and support mechanisms but I think it works for people, everybody's different and having all these things available means that it meets somebody's needs if those needs are being met it's so important.