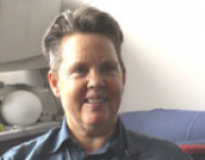 Used to take her medication regularly but now is trying to regulate it herself and finds that...

Used to take her medication regularly but now is trying to regulate it herself and finds that...

View topic summary
SHOW TEXT VERSION
PRINT TRANSCRIPT
Can you tell me what it's like to use medication? (paracetamol, dihydrocodeine, co-proxomol, Temgesic)

The medication I've been given varies from mild medication, like paracetamol, to quite strong medication, and it's difficult for me to gauge. I know I have to, I know I should take it before it gets too, my pain gets too bad, because then nothing works and that's difficult, to self-medicate.

Unfortunately the euphoria only lasts about a half an hour or so and then after that it's just, there's a dullness and that dullness, for me, dulls everything. So it dulls my sense of humour, you know, so I just feel dull, which is why I find television is a you know, a great choice of entertainment because it's dull.

So I'm having to self-medicate, so every time I have to take something I think, I have to think to myself 'How much do I take? Should I take this? Do I want to be taking this? How's it gonna affect the rest of my day?' and things like that, 'What am I doing for the rest of the day?'

Eventually had facet joint injections and found that they relieved her pain for two weeks and she...

Eventually had facet joint injections and found that they relieved her pain for two weeks and she...

View topic summary
SHOW TEXT VERSION
PRINT TRANSCRIPT
Oh right. Yeah, I was, I went to the pain clinic and I was referred to have inter-facet joint injections and, you know, and I didn't, that didn't really impress me as far as having a needle in my spine, and I'd heard bad things about the facet joint injections.

I'd heard that you, the onset of pain after, you know, you just get it overnight, so the level of pain that I'm used to, it's like turning up the volume from zero to ten and overnight. So that frightened me and I'd heard some other things about the, some other unwanted side-effects. So I left that.

I decided that isn't the road I wanted to go on and I continued with medical treatment from the doctor and I continued with the exercises which I've since been neglecting and, you know, I went along my way of, you know my own way, stubborn kind of way. But, recently, I've decided to take up the inter-facet joint injections and, but that, like I said I waited ten years to make that decision and I had these, I had the inj', the injections in, I think it was in May and they were painful, extremely painful.

But, for a few minutes after the injections I was completely pain free and it was amazing, it was absolutely just stunning and it was a high, it wasn't like you know having, you know, it was a drug but it wasn't like, it didn't have a euphoric effect, in that respect, didn't make me dizzy and loopy and weird it, it just felt great.

And then, of course, because it was so invasive, it took about two weeks to get over it, the actual invasion but then I had, I was able to exercise more and to live without pain medication. And I had a break and it was really, I think I'm going to stick with the, the pain, with the inter-facet joint injections.

However, due to lack of medical staff I have to wait a year for my next injection. So, in the meantime, at least I know that I can, you know, continue with exercising and, you know, try to do as best I can.

How long did the pain stay away for after the injection?

The pain, after I had the injections, the pain stayed away for about, it's hard to say, I do remember two weeks, about two weeks without pain and except I would overdo it, I'd be, I was so excited about not having pain, that I would, you know, do things that, you know, clean the flat or walk the dog, you know, a little bit further than I should have and then of course the pain would come creeping back.

So, I had to readjust my lifestyle, you know, after the injection and it was interesting, you know, just testing myself about how far I could go. But for two weeks, I would say, I was pain free... relatively pain free, for me pain free, you know. But the pain has come back but I'm kind of, now I'm just kind of confused as to how far I can push myself or not.

But I spoke to a woman, a nurse at the pain clinic and she said that I was on the right track. Some people, unfortunately, don't exercise, don't watch their diet and expect the injections to do everything for them without, without you know adding to it, you know being their own doctor as it were and that's unfortunate.

But she said I w

Explains that her dog comforts her, gets her out of the house and helped her to dismiss suicidal...

Explains that her dog comforts her, gets her out of the house and helped her to dismiss suicidal...

View topic summary
SHOW TEXT VERSION
PRINT TRANSCRIPT
Having a dog has been brilliant, in respect that he's company and he gets me, you know, he keeps me active, there's no way I can just, I don't have a garden, so I need to walk him and there are some days when I can't walk him, all I can do is go outside and stand while he walks himself. But that's okay, having the company has been absolutely a godsend. And there, and he understands.

So having him has been an extreme source of pleasure and comfort and I highly recommend it if you can, if a person can manage it, to have some sort of, you know, a cat or a dog, because he doesn't ask much, doesn't take much to feed or look after and the amount of pleasure and source of comfort I've had from that companionship is priceless.

You know, he is my best friend, well he's completely wonderful and he saved my life in respect that there was one time when I felt like ending it all, I'd had enough. I just, I was just so low that I thought 'I can't stand it' and I, you know, did think of ending it and he caught my eye and he just gave me, you know, he was really inquisitive, he was giving me one of these, typical dog looks, like that, and I thought 'Oh, I can't do this, what am I thinking?' and I got over it.

It was, you know, pretty intense, that was a pretty intense moment but yes, so I think he saved my life, I expect. And he does, he keeps me fit, you know. If I had, the idea is, what I'm trying to do now is walk a little bit more each day.

Some days, like okay yesterday I didn't do any walking, okay I hold my hand up, but some days I feel like walking more than others and I will force myself to do it. Now, if I didn't have a dog, if I didn't have that kind of... what's the word I'm, the kind of impetus, the kind of not encouragement, what is it? Well anyway, the idea of walking the dog, I probably wouldn't do it. So it's good for both of us, you know.

Had a home assessment for her benefits which she found demoralizing and painful.

Had a home assessment for her benefits which she found demoralizing and painful.

View topic summary
SHOW TEXT VERSION
PRINT TRANSCRIPT
The way to access the benefits system for me was by going to see my GP and then I had to... this was, I think it was, when I stopped working as a self-employed person, I went to see my GP and then I was, I was assessed by the benefits doctor and assessors and that was really demoralising. Demoralising, is that a word?

It was, I was put through tests, you know, can you pick up this pencil? And, you know, little tricks that they would do. Can you put on a hat you know. I just felt, I felt that they were unkind, they were, they weren't helpful. Some of the tests were painful and that was, that has it's own, it's own feelings, you know.

I just felt less than human almost. I did, I felt like a cow or something. It just felt awful because I think there are benefit cheats, you know. There are people that are on benefit that could be working and aren't, they see themselves, you know, easy bit of money or something. I don't know, I'm not them and I don't want to talk about them really, but well it just really hurt my feelings and the thing that was in my favour was that, you know, I said to them 'Look I want to work'.

I was self-employed for seven years, I did work, I did my best and they left me alone after that, they believed me. So I have been on benefit for quite some time since 1994 and that hurts. I don't want to be on benefit, I want to work, give me a job!

Used to get upset with her doctor's but now makes an effort to explain how pain is affecting her...

Used to get upset with her doctor's but now makes an effort to explain how pain is affecting her...

View topic summary
SHOW TEXT VERSION
PRINT TRANSCRIPT
I have been known to you know, storm out, be you know, what's the word, a difficult patient because I'm frustrated. You know, if you feel you're not being listened to, it's frustrating, really frustrating. But now I realise that it's better for me to understand them not understanding me so that I can get my point across, if that makes any sense to you.

So if I go to a GP and I'm not being understood or I'm not being... I put myself in their shoes, thinking 'Okay here comes another one' you know, or whatever, whatever they don't know about chronic pain, I'll try and be different and say 'Well actually it...' you know, and go overboard to try and make them understand a little more of what my situation is like.

Instead of acting out on my frustration that's just going to, that's not going to get me anywhere. So I'll make an extra effort to, to give them an idea of what it's like to you know, walk in my shoes. Especially since I worked for GPs so I understand what it's like for them.

I know that they've got seven minutes and about, you know, eighteen more difficult patients to deal with, so they hardly need me bursting into tears or storming out in anger, you know, frustration. So I, I've learned over a period of time to you know, be more patient with the doctors.