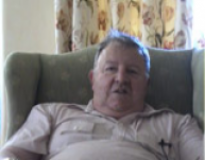 Medication was making him too drowsy so his GP tried acupuncture, which was effective but short...

Medication was making him too drowsy so his GP tried acupuncture, which was effective but short...

View topic summary
SHOW TEXT VERSION
PRINT TRANSCRIPT
The effects of the sort of heavy sedation really started to cause problems in my life. I was half asleep most of the time, couldn't think clearly and there was no way I could do any work satisfactory. So, I looked for alternatives but there wasn't any one that was obvious.

Even sort of looked at going to alternative therapists but nothing came of it. My Doctor decided to try some Chinese medicine on me in the way of acupuncture which in fact produced a remarkable improvement, didn't remove the pain but he was doing it in his spare time and doctors don't have much spare time, so he couldn't keep it up for a long time.

So you say that it was effective?

Very. If you can find someone to do it for over a length of'it doesn't last for long. It lasts a maximum a couple of days I find.

View topic summary
SHOW TEXT VERSION
PRINT TRANSCRIPT
Can you tell me a bit about what it is like to have an injection done?

The second time only for about two months and they loose their effectiveness as time goes by. It was the same when the anaesthetist who gave me the last series of injections recommended that I went to the Chronic Pain Management Course.

Was able to return to work after attending a pain management course.

Was able to return to work after attending a pain management course.

View topic summary
SHOW TEXT VERSION
PRINT TRANSCRIPT
I mean I really was back to the situation where I couldn't walk very far; I couldn't sit for any length of time; I couldn't stand for any length of time; the only comfortable position was lying on the floor. And then I was invited to take part in a Chronic Pain Management course which I was quite sceptical about at first. It involved a lot of effort on my part going.

It was a twelve week course and starting very early every Monday morning, lasting a day each week and quite frankly the end result was quite miraculous. I suffer very little pain now, it comes and goes.

I took myself of painkillers completely, I still take non steroidal and anti-inflammatory drugs but they have little effect, side effect on me and a few other drugs associated with sort of the medication the... interventions that I had but none of those affect me.

I've now resumed a career, I 'm Group Managing Director of a large group of companies which I certainly could not have been without the Chronic Pain Management. It really was quite remarkable the results from it, it really only teaches you to manage the pain yourself together with some pretty stiff and difficult physiotherapy.

Now I living a reasonably normal life. I still have to get up and move about quite often but that's no embarrassment to anybody and I have to modify my driving skills and length of time that I am in the car I'm almost back to where I was in 90, 1990, quite incredible and I don't think I can say anymore than that about it.