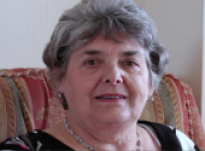 Age at interview: 71
Brief Outline: Victoria's husband Hugh has mesothelioma, which is a rare form of cancer normally caused from exposure to asbestos. In Hugh's case a tumour has developed in the space between his lungs and rib cage.
Background: Victoria is a retired teacher. She is married with three grown up children. Ethnic background' White British.

Victoria’s husband Hugh went for a pulmonary function test in September 2010 and they were told that he may be terminally ill with mesothelioma, which is a rare form of cancer normally caused from exposure to asbestos. At the start of October Hugh returned to the hospital for a PET scan which confirmed the diagnosis of mesothelioma. He then had a consultation with a surgeon, but unfortunately Hugh was not suitable for surgery due to previous blood clots. They also decided against chemotherapy as this treatment would put him at risk of stroke and heart attack, while only prolonging his life for a short time.

On this same day Hugh was fitted with a pleural fluid drain. They did not know how to use the drain and so local nurses visited their home twice weekly to use it. By February they were no longer able to drain the fluid as the tumour had grown around the drain. The drain was removed and this caused Hugh to feel sore for most of March.

Victoria discusses how Hugh’s condition is deteriorating; the tumour has stopped him from using his right arm and he becomes quite breathless when moving about. Hugh has asked many doctors how long he can expect to live and how his condition will deteriorate. However, doctors seem reluctant to answer his questions claiming they do not know. This worries Hugh and Victoria because they wonder if doctors are trying to protect them from the knowledge that it is going to be ‘horrendous’. They are keen to know what happens next in terms of Hugh’s condition and Victoria describes how not knowing what to expect is one of the hardest things to deal with.

Victoria has not found it difficult to care for Hugh and explains how she doesn’t really see herself as a ‘carer’, but instead thinks of herself and Hugh as a ‘partnership’. She expects that she will need more help in the future as Hugh’s condition worsens but is unsure what help is available and does not know how to organise this.

They both attend a Breathe Easy support group which they find very useful. She describes how as well as being a social event, it also provides them with a chance to talk to health professionals and get practical information. Friends, family and neighbours have provided Hugh and Victoria with great emotional support. Victoria also discusses how their faith has given them both comfort and support, and wonders if they would have been able to cope without this. Victoria is impressed by Hugh’s attitude as he tries to be as active and positive as he possibly can.

Victoria couldnt find any information about how her husband would be affected by his rare cancer...

Victoria couldnt find any information about how her husband would be affected by his rare cancer...

What I’ve been doing all winter has been researching mesothelioma because I was given a leaflet about it or a book booklet with information for people with mesothelioma and their carers but it didn’t give me very much information, it was very minimal and none of the doctors that that we actually did talk to ever told us very much about it. And whether they didn’t want you to know what was going to happen next or whether it was horrific and they didn’t want to tell you, we really don’t know much about what the next stage is. And I have been reading all that I can find and it’s mostly American sites and I’ve been watching videos of doctors giving talks, now I don’t understand a lot of the medical terms but I’m picking them up and I’ve been doing my best to learn as much about it as I can and I do think there is not enough told about it. I mean to say, when I speak to people and tell them my husband’s got mesothelioma they’ve never heard tell of the word. I had never heard tell of the word until the doctor wrote it; I got him to write it down for me. And there’s nothing known about it. None of my friends know anything about it and my family don’t know anything about it. The only one that knew about it was my daughter-in-law and the reason she knew about was because she’s a physio, she works in the Health Service and she knew the word.

And, so it’s difficult to know where to find out anything more about it. The leaflets or the booklets don’t tell you an awful lot, even the mesothelioma site doesn’t tell you an awful lot and there they’re all telling you about treatment and drugs and chemotherapy and radiotherapy. Nobody tells you what to expect if you’re not having any treatment. So that’s why the support from the Marie Curie is very helpful and I do think if I ask there they may tell me you know what to expect next and because I did ask and she did, the nurse did say, well, I said, “What, what do you think is going to happen next?” and this “I know it’s growing” and she said, “Well he will lose weight, you know and his appetite mightn’t be so good” and that is happening. Alright it’s not very fast pace at the minute but you know I just don’t know, you know, will it affect I don’t know whether it’s going to affect his heart, affect his, will his breathing get worse, will he need oxygen? I don’t know anything like that.

And sometimes my husband says “Will I be gasping for breath?” But we don’t know and nobody knows and again I suppose everybody’s different and maybe he’ll not. I don’t know. But that’s, you’re just left in the dark, that’s the way I see it.

Victoria thinks that professionals should be more upfront about a diagnosis of terminal illness...

Victoria thinks that professionals should be more upfront about a diagnosis of terminal illness...

So have you got any messages you’d like to give to the health professionals or any of the other professionals that have been involved in your life so far?

Right, well the only bit of advice I would give to any of the health professionals. I know everybody’s different and I know everybody maybe can’t take a diagnosis of terminal illness but in some cases when the people actually ask, you know like my husband for example saying, “How long have I got?” and, “What’s going to happen next?” “Am I going to be left gasping for breath?” I think it would be a good idea to tell them the truth as they know it. It may happen to you, it may not happen to you in ninety per cent of cases say for example this happens but something like that that you would know the truth of what is, what they think is going to happen next and not leave you in the dark .