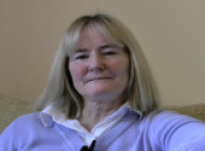 Age at interview: 60
Brief Outline: Ruth's mother was diagnosed with terminal stomach cancer in 2008. Ruth described how her mother maintained a positive attitude and was not afraid of death.
Background: Ruth is married with two grown-up children. She works fulltime as a self-employed counsellor. Ethnic background' White British.

Ruth’s mother was diagnosed with terminal stomach cancer in 2008, shortly after they had celebrated her 80th birthday. Ruth describes how from this point she began spending every day with her mother and during this time they became closer than they had ever been before. Her mother was a very positive and strong character who never normally complained about any ailments, so when she started to talk of pain and discomfort Ruth took this as an indication that the pain must have been fairly severe.

Her illness progressed and Ruth recalls a traumatic experience when her mother called for her during the night. When Ruth arrived her mother was very unwell and she called the NHS helpline and an on-call doctor arrived. Ruth was surprised when the doctor took a urine sample and left, as she felt her mother was obviously very ill and needed more attention. Unsure about what to do, Ruth called her sister and daughter. Once they arrived they decided to call for an ambulance and Ruth’s mother was taken to hospital and was given pain relief.

She was admitted to a ward where she could come and go as she pleased. While on this ward, Ruth regularly took her out and describes how, during this time, they grew even closer. Ruth describes how her mother remained ‘stoic’ ‘strong’ and ‘positive’ and maintained a great sense of humour throughout. Ruth explains how her mother was not afraid of death and so they felt comfortable to discuss her death and arrangements afterwards. Her mother even arranged and paid for her funeral before she died.

While her mother was ill Ruth continued to work and describes how this actually provided her with some relief from the situation as focusing on something else relieved her worry. She describes how the care provided by the Macmillan nurses was excellent and suspects their care was much better than any other medical care they could have received. Ruth mostly relied on her family for support and feels that they grieved for her while she was dying, rather than after she died.

Ruth describes how the last two weeks of her mother’s life were extremely hard to bear, because she was in a lot of pain and also very frightened. Ruth despaired and asked the nurses to do something, but nothing could be done and because of this experience Ruth fully supports euthanasia. For the last week Ruth’s mother was mostly unconscious and when she finally died Ruth felt a great sense of relief as the suffering had ended.

Ruth was shocked when her mother was diagnosed with terminal cancer; although she didnt have a...

Ruth was shocked when her mother was diagnosed with terminal cancer; although she didnt have a...

Because I had an iffy relationship with my mum, not very close and when she was eighty she had this birthday party, first one she’s ever had. And a week later went into hospital and when she came out, they hadn’t done the operation and I was with her and the Macmillan, not the Macmillan unit. I was with her at the hospital when they told her that she would die of it. It was terminal cancer. I was as shocked as my mum. Well I say that, I probably wasn’t as shocked as my mum.

But she was very shaken, very quiet and I thought, “Don’t want to deal with this.” Anyway, we went to my sister’s and I had to tell my sister, which was the hardest thing because we’re both crying, but it was shock more than anything because neither of us were that close to her, although she was an okay mum but circumstances.

So but we thought it was in the future so we all got used to it and my mum lived alone and has lots of friends. She’s quite social. She had lots of friends and she seemed all okay with it. She was pretty stoic, but I felt the need to see her every day and my sister didn’t, as a matter of, my sister’s got a disability. So I went to see her, called in there every day and it wasn’t a chore because she’s quite a positive person but, obviously, she was brave and, except in the night time when she was on her own.

Ruth spent several nights at the hospital with her mother because it took longer for her to die...

Ruth spent several nights at the hospital with her mother because it took longer for her to die...

The worst bit was the last two weeks and because of that I really believe in euthanasia because it got so bad she was, I, I imagine that, in the old days, they died screaming in agony with stomach cancer. It started off at her bile duct and it was gradually moving across so it blocked everything. Because they kept her clean, they kept her pain… relatively pain free, but two weeks before she died I went in on the Saturday and she was pretty unconscious by then and she woke up and she was terrified.

She didn’t know where she was. She clung to me and she was in pain and I was frightened and I didn’t stay with her. I just, “I’ll get a nurse. I’ll get a nurse.” I was really frightened and her, I went down to the nurses place and I said, “You’ve got to come she’s wet and she’s scared.” Of course, it took a few minutes and that’s what made me realise that she was better off in a Macmillan unit because at home you wouldn’t get that help. But they came rushing up and they got the doctor and they pushed the medication up and she sank back again. But it really shook me up and I was saying, “Please do something. She’s going to die. She’s unconscious. What’s the point?” And they said, “We keep being asked that but we can’t.” And then my sister came in on the Sunday and the same thing happened to her. She woke up and my sister did exactly the same as me but she had somebody with her because [Name], a family friend, was with her. So the two of them so it was a bit easier.

But [Name], my brother, was there and we were just waiting. It’s so bloody awful to just wait and eventually, it went on a week, and he had, he had to go back to work and we didn’t know whether she’d die. Both of us had spent the night there several times and we you’re mixing with other people doing the same thing but it seemed to be quicker. It was a long wait and it felt like it would be a relief if she died but the week went on, all her friends came. She had so many people visit her and talk to her, but she wasn’t there. And the, all you got was a morphine driver and you had to tell them to clean her and stuff like that. It was dreadful way to end and she, I mean she used to joke, when she, before she got unconscious, because my nephew visited her and she said, “My God, I must near the end if he’s visiting.” And things like that. She was, when she was awake it was great and she, when we were arguing over the bed once, she said, “Do you mind, I’m trying to die.” She was fantastic and that, I guess, we got closer than we’d ever been. I do thank, I am thankful that that happened.

But the last week she was unconscious. It was complete, awful, she was just being, they were waiting for her heart to stop. They said her heart was strong, her lungs were strong but the rest of her body was closing down. There was good stuff. A masseur came and did her feet and things like that.

The Macmillan unit was fantastic. They kept her free of bed sores. It was superb treatment but wasted, complete waste of time. If I, if I could have stuck an overdose in the cannula I would have done. I would have done it and I would have wanted someone to do it for me but my I nearly went out on the Thursday she died but I decided that it was getting bad so I’d go and see and I met my sister there. It was so lucky and they said, “Oh, she vomited. She vomited up some black stuff.” And she was always doing that and so the, the nurses came in to clear it up and they said, “Go and wait in the waiting room.” And then they came rushing down, said, “You’d better come. We think she’s near, near the end.” And they’d cleaned her up a bit but the vomit was still around and she was laid there and she w