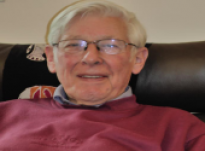 Age at interview: 78
Brief Outline: John's wife Joyce was diagnosed with pancreatic cancer in 2001 and died 7 months later. John describes how during this time they spent a lot of time together seeing family and friends.
Background: John is a widower and has 4 grown up children. He is a retired marketing manager. His ethnic background is white British.

John’s wife Joyce was diagnosed with pancreatic cancer in 2001 after being hospitalised with ongoing stomach pain and jaundice. At the time, John believed that Joyce would recover because initially they planned to remove the tumour and he describes how his Christianity gave him faith. When they were told that they could not operate and it was estimated that Joyce had only six more months to live, they were shocked and John describes this news as a ‘hammer blow’. Joyce then started chemotherapy, but could not tolerate it and so stopped after three months. Eventually Joyce became very unwell and died peacefully in hospital.

During the last six months John describes how they spent a lot of time together with family and friends. John still has his diary from this period and he remembers it as a ‘nice time’. John explains how they continued their interests and activities as normal, and he believes this helped them to take their minds off the illness and future. John discusses how the main source of support came from family and members of their church. Joyce remained fairly independent and so could look after herself until very near the end of her life.

Joyce and John had recently returned from a holiday with family when Joyce became very unwell and was admitted into hospital. At this point they understood that she was nearing the end of her life and had planned that when the time came they would bring Joyce home and nurse her there. However there was not enough time to do this and John was only warned the day before she died to prepare for her death. John and his children stayed with Joyce throughout the night and were with her when she died the next morning. He explains how it was very peaceful.

After Joyce’s death John discusses how he was very emotional and how sometimes this emotion would take him by surprise. John’s family and friends were very supportive throughout this time and he describes his son as a ‘tower of strength’. During the last four years John has also become involved in cancer services at the local hospital; providing patients’ perspectives by drawing on his and his wife’s experiences. John discusses how Joyce had had symptoms two years previous to her diagnosis but it was not recognised as pancreatic cancer at that time. John strongly believes that there should be more research into recognising the symptoms of pancreatic cancer by interviewing carers and patients about their experiences to enable earlier diagnosis.

John sometimes felt guilty about spending time on his hobbies that could have been spent with his...

John sometimes felt guilty about spending time on his hobbies that could have been spent with his...

I mean I have got a lot of involvement in various activities that I’m involved with in the church and in the, and in an aid project that I’m involved with, food aid project. And so, so actually, looking back, I was able to continue with that involvement and sometimes, I sometimes think to myself, when I’m feeling really guilty, “Should I have dropped everything and just spent the time with Joyce?” But I mean I think, truthfully, taking a balanced view, I was probably able to give her care that she needed and still, and she would still release me to, to be involved in, in things that I thought were important. And I suppose, truthfully, that was a good thing actually for me. Yeah.

John thinks that professionals need more training to understand the support needs of people at...

John thinks that professionals need more training to understand the support needs of people at...

I’m sure that there are many nurses who have nursed dying patients and have been very helpful to them, but their experience of being able to know how long a patient has got and what is the most appropriate support to for them and their families during that final time, I think would be, would be quite, would be very good.

John felt supported by his faith, even though at times he struggled with God. He thinks his faith...

John felt supported by his faith, even though at times he struggled with God. He thinks his faith...

And you have talked several times about your faith. Did it impact on your faith?

Well, I think I was still struggling for a while about why all this was happening to Joyce because she was a mother and a grandmother and even expecting to be a great grandmother and so she was very much needed to, was involved in supporting that family. And so I think I had a bit of a struggle with God about why this had happened to her but again, you see, we did have support from our, our minister at church and our Christian friends in terms of support and prayer. And I suppose really I didn’t really start facing up to it with God until after she’d gone and so that, that was a that was a really tough time but it’s a time that I’ve come through.

So at that time, do you think your faith supported you or was a challenge?

Yeah, it did support me. It did, yeah, yeah. I think all the time I was conscious that God was with us even in these times. That he wasn’t leaving us alone yeah.

Are you more involved in your faith now, would you say?

Yes, I think so. I think it is more rounded because I mean I’m now able, more in a position to discuss these issues with people who want to talk to me about it. For instance, I work on the chaplaincy team at the hospital so that involves me in making communion Eucharist rounds on a rota basis and so that does open up all kinds of opportunities to talk and to help people.

I think probably, I am closer to God now than I, than I had been if I look back but I think, on the other hand, I’m still very human and still very up and down. It’s far from perfect and it won’t be in this life.