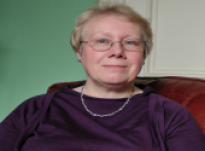 Age at interview: 55
Brief Outline: Fiona's mother died of widespread cancer in 2009, aged 89. Fiona gave up work and devoted her time to caring for her mum at home.
Background: Fiona is married with no children. She works part time as a census coordinator. Ethnic background' White British.

In 2009 Fiona’s mum was diagnosed with widespread cancer at the age of 89. Fiona was surprised at this diagnosis because her mum had always been very healthy; she never smoked, had a healthy diet and took regular exercise. The cancer was now at the stage where it was terminal and she was expected to live for, at most, a few months. They chose not to put her mum through unnecessary tests to find where the primary cancer was, as this knowledge would have made little difference. Once her mother received the diagnosis, Fiona was keen to get her mother out of hospital. She did not believe the ward was sensitive to the needs of terminally ill patients and suspected that the staff were often too busy to give sufficient care. Fiona decided to care for her mum at home, because she had made it clear that was her preference and Fiona describes how her mum was quite particular and having her at home gave Fiona the freedom to tailor care to her specific needs.

Once at home, Fiona describes how her mother was even weaker that she had anticipated, and remembers how she felt disappointed when her mother decided she did not want to leave the house anymore. They knew that she did not have long to live and Fiona gave up work to make sure she could devote her time to caring for and spending time with her. In fact, she died about a month after being at home, which was even sooner than Fiona had expected. While caring for her mum at home Fiona remembers how the district nurses were ‘amazing’ as she could call them whenever and they made sure Fiona was prepared with equipment aids as her mother’s physical condition declined.

During this time Fiona was so focussed on caring for her mother that it was difficult to keep on top of other responsibilities such as household chores. She describes how the stress and exhaustion she felt sometimes made it difficult to make rational decisions. During this time, her husband worked away during the week, and Fiona ensured that she factored in some time to spend with him at weekends while her sister looked after their mother. This allowed her to have some respite from caring and meant she managed to spend time with her husband too.

Fiona set up a monitor in her mother’s room so she could hear if she needed care during the night. This meant that Fiona got little sleep and was very tired for much of the time during this period. Eventually, she asked the charity Marie Curie Cancer Care for help and they arranged for a nurse to care for her mum during the night. With hindsight, Fiona wishes she had asked for this service a lot sooner as it would have helped her a great deal. Eventually Fiona’s mother died during the night. Fiona describes how she felt comforted that she had died at home and it gave her and the family the time and privacy to say goodbye properly.

Fiona had to lay out her mothers clothes ready so she could dress her quickly because her oxygen...

Fiona had to lay out her mothers clothes ready so she could dress her quickly because her oxygen...

She wasn’t initially in any pain. She was, she had discomfort with her breathing. She needed to be on oxygen all of the time even when she was lying in bed. So if she had to take her oxygen tubing off we, it couldn’t be for very long, so getting dressed and, and things like that were something that had to be done quickly. And it was a question of sort of preparing for that, having everything laid out ready and, and knowing which arm was doing what and so that I could get Mum’s sort of oxygen back on quite quickly.

Because it was it was just sort of trying to keep things normal, picking out your clothes. Mum liked to be neat. She, she, you know, would always want to get dressed in her clothes and it was only when she was very ill that she, you know, felt, at the last sort of week of her life, where she didn’t really want to do that so, quite so much. But we were able to put the necklace on and colour coordinate and decide what we were wearing tomorrow and, and do mother and daughter things.

You know, and that was very important.

Fiona felt that the acute hospital ward her mother was on had been unsuitable for someone with a...

Fiona felt that the acute hospital ward her mother was on had been unsuitable for someone with a...

And I think you do need to be very clear with the hospital and I think you have to be much more proactive with hospital staff because it seems to me they’ve got a lot more distractions. And the understanding I felt on an acute ward about terminal illness was, was lacking I felt. They didn’t really understand, because we had limited visiting and under no circumstances would they relax that. So that’s why I was quite pleased to get her home because it, you know, I didn’t want that to carry on for too long. Yeah, I, I just feel that nobody seemed to appreciate that that, you know, that how ill she was and, and what she was going to need.

The district nurse encouraged Fiona to make a list of things that she might need to help her care...

The district nurse encouraged Fiona to make a list of things that she might need to help her care...

Did you feel that the care was organised or were you the sort of at the centre gathering bits as you could?

I think you have to be quite proactive yourself. You have to know what to ask for. The other thing is of course, people will tell you things but it’s a question of if they say this only once it’s not, not necessarily going to get, you know, you’re not necessarily going to click, “Oh, actually. I do need that.” You know. I made lots of lists and the district nurse liked quite like encouraged me to do so, so I didn’t feel I was sort of being bossy or, or anything. She was very, very good about, you know, offering and she did offer things I hadn’t thought of, which helped.

So just talking about it seemed to sort of bring that out. So I think the visiting was important. The hav…them having time to talk to me was important you know, and also giving me time to sort of gather my thoughts about what, what we do next. And I did ask a lot of questions and you know, I did try and I didn’t want to, you know, I tried to make best use of the contact times. That that was my aim because I didn’t want to always be on the phone about this, that and the other so I did always look at other ways of getting answers if, if I felt I’d been overburdening one service. Yes.

The two hours respite care that Fiona had a week while looking after her mother who had cancer...

The two hours respite care that Fiona had a week while looking after her mother who had cancer...

The other thing I didn’t do straight away I think was I was offered two hours respite by the palliative care team and that was marvellous [laughs] because Mum had another face, which is important. We had sort of carers coming in to help with her personal care but they that was very brief, these were people we didn’t know terribly well. Very nice people, very willing and helpful but they tended to come in, do what they had to and leave. So I couldn’t sort of guarantee they’d be with Mum an hour so I couldn’t pop out to the shops or anything. So I didn’t find that part of it terrifically useful, particularly, as it didn’t, well, it couldn’t possibly fit in with what when mum wanted to get up and when mum wanted to go to bed. You couldn’t fix a time for those sorts of things so it was that that I didn’t find that as useful but the two hours respite during the day, that was a time I could have where I could go and get things organised and I didn’t have my focus on Mum. So and that was that was really, really very useful. So in the end I got one of the carers to come in and do what someone that had been looking helping mum with her personal care for a very long time, I got her to come in and do lunch for her and spend two hours with her and I put it back to back with the respite. So I could go out for a whole four hours a week [laughs].

Which was very useful, yeah. And I wish I’d actually, organised that sooner.

Can you tell me how you found that, having that care, that respite care? How was it for you?

Well, it was essential really [laughs]. I didn’t think it would be, you know. I thought it would be a nice break for Mum but as it turned out, it was a very good break for me. I mean I could go off and have a nap if I wanted or sit, you know, by the sea or, you know, have some time, you know, shopping, you know, where I had a bit more time, rather than, you know, hit and run [laughs].