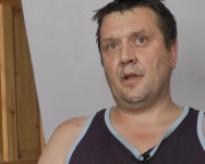 Age at interview: 48
Brief Outline: Wayne fractured his shoulder after a fall. He had a total of three steroid injections. The first two controlled the pain for long periods of time, but the third injection was unsuccessful. He was referred to a specialist who indicated he needed decompression surgery. After surgery, his GP referred him for physiotherapy and he attends sessions every two weeks. He feels happy with the range of movements, flexibility and strength in his arm and shoulder although he still feels tender and sore.
Background: Wayne is divorced with two grown up children. He is an engineer and works full-time. Ethnic background: British.

Wayne had a nasty fall at work and landed on his shoulder, but drove himself to A&E where the X-ray showed that he had fractured his shoulder. In hospital, he had the shoulder re-set and was told to keep his arm in a sling for two weeks. After that, he went back to work and everything seemed to be fine. However, soon after he went back, he started having pain in his shoulder. Wayne went to his GP and was given a steroid injection. The positive effects of the injection lasted for almost a year, but after that he went back to his GP again and had a second steroid injection. Again, it managed to relieve the pain for a long time. But a third steroid injection didn’t have the same effect as the previous two and he was referred to the hospital to see a specialist, who told him he needed decompression surgery. Wayne told the surgeon he would be more than happy to accept a cancellation at short notice. At the hospital, he was asked to sign a form to that an effect.

Wayne described the pain he felt after his fall as ‘horrible’, but says that after the shoulder was re-set, the pain was mostly at night. Increasingly, however, the pain began to affect his work, his mood and sleep. Due to the pain, Wayne found it very difficult to sleep on the affected side – which was the side he had always slept on. Also, he has sleep apnoea.

When he got to see the consultant he was explained everything about the decompression surgery and was able to see the Technology Enhanced Patient Information (TEPI) video, which he found most educational, though he found the idea of nerve block a bit ‘weir’. Indeed, at the start of his surgery, he was able to see on the screen as the nerve block was injected into his neck and felt a bit worried and thought that if something went wrong he would be paralysed. But he trusted the team doing the operation.

Surgery went well, but, because of his sleep apnoea, he had to stay in hospital overnight. Wayne remembers having no sensation in his arm and shoulder for the first day, due to the nerve block, but four days after surgery, he was feeling a lot better. When he was discharge from hospital, he was given painkillers to take to help control the pain, but he used them for a short period only. Soon after the operation, he was able to drive and, after two weeks he went back to work.

Wayne has done the post-op exercises using the leaflet he was given at the hospital. He once tried to use the TEPI video at home, but could not find the site. After his surgery, Wayne’s GP referred him to physiotherapy, which he continues to attend every two week.

Slowly, the range of movements, flexibility and strength in his arm and shoulder has increased. Wayne still feels tender and sore but he said it is to be expected after they removed the extra bone that had grown in his shoulder.

Having a ‘dead’ arm was a weird sensation. Wayne was a bit worried the first night. He’d read the leaflet and knew he could get tingling later.

Having a ‘dead’ arm was a weird sensation. Wayne was a bit worried the first night. He’d read the leaflet and knew he could get tingling later.

View topic summary
SHOW TEXT VERSION
PRINT TRANSCRIPT
The weird sensation for me was obviously having the arm completely blocked with the nerve block, how did I cope with that? Oh that was a bit, bit stressful the first night. Obviously trying to carry a complete dead limb around and very conscious not to sort of like turn around and smack it against a door or wall. So I was really sort of like conscious of that.
Got back into the bed obviously after I’d been to the toilet, and I thought to myself, “God I hope this comes off.” And by about twenty past eleven the next day I could start feeling some I could rotate my arm, ‘cos I couldn’t before, I was going slightly like this. And I could feel like a tingling sort of, like a pins and needles, and I knew that was going to happen because the information on my sheet which I read from [name] or [nurse’s name], the staff nurse downstairs, she made me read about all that and yeah it was, it was fine.