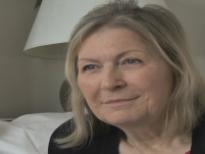 Age at interview: 72
Age at diagnosis: 54
Brief Outline: Marianne first had symptoms twenty years ago, but it was a few years later that AF was diagnosed. She has tried a number of different medications but always experienced side effects. She takes warfarin and candesartan, and is due to have an ablation soon.
Background: Marianne is retired from her work in the charity sector. She has one grown up daughter. Ethnic background: White British.

About twenty years ago, Marianne started to occasionally have palpitations and feel faint. Since she was living in France at the time, she put it down to dehydration and living in a hot climate. Looking back, she also remembers sometimes having similar symptoms at school, so wonders if she had AF then. Marianne’s symptoms continued, and she came back to UK to visit her GP. She also saw a cardiologist, but was told that an ECG had not shown up any problems with her heart.

A few years later, Marianne’s husband passed away which was a huge shock for her.  Marianne noticed that her symptoms were worsening, and now living back in the UK, she attended A&E during one episode. Following investigations, she was diagnosed with paroxysmal AF. She was told that when she had seen the cardiologist in the past, she must have been in sinus rhythm (not having an episode of AF at that time), and so no irregularity had showed up. Marianne started taking aspirin to reduce her risk of stroke, and at a later date changed to warfarin. She also tried taking the antiarrhythmic medications amiodarone and flecainide, plus some beta blockers, but says she always felt ‘spaced out’ and dizzy on them. She decided not to continue to take these. Marianne now takes candesartan as she has a problem with the blood pumping in the ventricles of her heart. When she was diagnosed, Marianne says she felt angry, and remembers asking her GP how she could get rid of AF. Her GP said that she needed to come to terms with the fact that AF is a life-long condition.

Whilst Marianne would rather not have AF and considers it ‘an inconvenience’, she says that she rarely has symptoms, and her episodes last fifteen minutes at most. Marianne says she used to be more conscious of her AF at night when lying quietly, but is not so aware of it now. When Marianne walks uphill, she cannot walk and talk at same time and needs to regulate her breathing. She is not able to go rambling anymore, but enjoys going on regular holidays and AF has not affected her ability to travel. Anxiety and rushing about are triggers for Marianne’s AF. She continues to take warfarin to reduce her risk of stroke, and finds the blood monitoring process ‘easy’. She receives information the day after on any change in dosage along with a date for her next appointment.

Marianne joined the Atrial Fibrillation Association, and has found attending their conferences and a local charity support group helpful for gaining information and sharing experiences.  She is also a member of the British Heart Foundation. Marianne once heard someone speak on ablation procedures at an AFA conference, and asked her GP to refer her to a specific consultant in a particular hospital, to find out whether she would be suitable for an ablation. The consultant explained that an ablation may not work the first time (as with many people), but she would be suitable for the procedure. Marianne was due to have an ablation, but recently broke her hip, so the procedure is due to be rescheduled.  She feels that if an ablation is successful, it must reduce a person’s risk of stroke. However, her consultant says that this has not been proven.

Marianne feels that she needs to be ‘proactive’ with her NHS care, and advises people ‘Don’t sit back and wait for something to happen because it probably won’t.’ She feels it is important to keep herself up to date with research on AF, new medications and procedures. Marianne says she would have liked to have been talked through more options by medical professionals rather than researching them herself. She feels that a regular NHS check-up service or support group would be useful for people with AF.

Marianne thinks that people are generally not aware of AF, particularly because it is not something you can see. She reminds friends and family that people may be very frightened when they are diagnosed with AF, so urges people to be understanding.

Marianne has paroxysmal AF with symptoms that come and go. This made diagnosis difficult and it took some years before her condition was picked up.

Marianne has paroxysmal AF with symptoms that come and go. This made diagnosis difficult and it took some years before her condition was picked up.

View topic summary
HIDE TEXT
PRINT TRANSCRIPT
About twenty years ago, I kept getting rather strange palpitations and feeling faint and I didn’t know why. At the time, I was living in France but I came over here and saw my GP, who sent me to a cardiologist, who said, “Nothing wrong with your heart. You seem to be perfectly alright. Can’t find anything. Maybe just some, you know, weird thing.” So I thought, “Oh well, that’s it. There doesn’t seem to be any real cause for this.” And then a few years later my husband died and it was an immense shock. I was here and he was in France at the time so I went over there to supervise everything and clear things out and all that. And I suddenly felt terrible. I felt really faint and dreadful. Everybody thought, I think they thought I was rather, putting it on. I said, “I’ve got to just lie down.” So I laid down for a while and felt a bit better, but I still felt very strange. When I got back here I felt better, but a friend of mine said, “You’ve just got to go and go to the hospital in London.”

So I went because I felt palpitations again and at the hospital they fast tracked me straight through, which was very surprising. Straight from A and E and they stuck tubes down my throat and in my arm and everything else. I was quite calm, actually. I read a book I remember. And they said, “Oh you’ve got something called atrial fibrillation but it’s paroxysmal, and that’s probably why they didn’t pick it up before because, when they were monitoring you, you were in sinus rhythm [normal heart rhythm] and it didn’t show.” So that was all a bit traumatic.

Marianne can no longer go rambling but otherwise does not find her AF too much of a problem.

Marianne can no longer go rambling but otherwise does not find her AF too much of a problem.

View topic summary
HIDE TEXT
PRINT TRANSCRIPT
I used to fall asleep in meetings at work, which was rather bad. I think that was because I was just overtired. Oh yes, I used to quite enjoy walking but I can’t go rambling, that kind of walking. I mean there was one occasion when I just couldn’t go much further and it was really quite embarrassing to say, “I’m sorry. I can’t make it.” So I don’t do that anymore. I don’t think otherwise it affects a great deal. I just have to take care. I mean I know where I’m going to be perhaps handicapped with it but, as I say, I now know that if I regulate my breathing, and don’t talk, I’m okay pretty much.

Marianne fears she will have a stroke in the future, although this may not happen. She fears being permanently disabled.

Marianne fears she will have a stroke in the future, although this may not happen. She fears being permanently disabled.

View topic summary
HIDE TEXT
PRINT TRANSCRIPT
Oh, I shall have a stroke presumably, and I don’t know how bad, assuming the ablation is not effective. A junior doctor once said to me, I said, “What’s the worst that can happen?” “Oh, you could have a stroke.” He said, “But it wouldn’t be a really bad one. You probably wouldn’t die.” I said, “You mean I’d just be permanently disabled?” I thought that it probably might be better to die. Yeah, I shall have a stroke I assume, and who knows? I don’t know. That’s the end result I guess, probably. I don’t know, maybe a pacemaker would stop that, but I’ve no idea. Haven’t got into that part yet.

Marianne decided to go ahead with an ablation, although her consultant warned her that it may not be successful and she may need to repeat the procedure.

Marianne decided to go ahead with an ablation, although her consultant warned her that it may not be successful and she may need to repeat the procedure.

View topic summary
HIDE TEXT
PRINT TRANSCRIPT
I joined the local organisation for AF and the AFA [Atrial Fibrillation Association]. They have annual meetings which include patients in London. I went to a few of those and I realised that I probably could have an ablation and where I could go to find out about it.

I said [to my GP], “I’d like to see this particular consultant at this particular hospital in London, because that is a centre of excellence for ablation and I want to find out whether he thinks I can have it done. Because I am now in AF permanently, and they don’t always think that the outcome is going to be very good.”

So I went and I saw this particular consultant who was very good and talked to me about it and he said, “I think you’d be perfectly alright. It probably won’t work first time because for about eighty per cent of people it doesn’t and you would have to have it done again, maybe even a few more times, but at the end of that, you should be free of AF, if that’s what you want.” And I said, “Yes, that’s what I want.” Because I’m not used to being ill. I don’t like it. I was due to have an ablation but then I broke my hip so it’s been postponed, I went to the hospital and saw the nurses and it was all set up for a particular day, which I couldn’t go to. I had to ring them up and say, “Sorry. Can’t come. I’m in another hospital.” So that’s it. That’s where we are at the moment, in a nutshell.