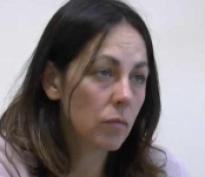 Age at interview: 46
Brief Outline: Raised by a domineering and physically controlling father and a violent alcoholic mother, Catherine’s experience of abuse began during her childhood. As an adult, she has been physically attacked, both by an ex-partner and one of her sons. From 2000 she lived in a 12 year ‘negative’ marriage, which was characterised by her husband’s controlling and manipulative behaviour. (Video clips played by an actor.)
Background: Catherine is a white British woman who lives with her new partner in their owned home. Catherine is doing postgraduate study at university. She has two sons, both in their 20s.

Catherine met her ex-husband when in her early 30s. For 12 years she was married to a man whose behaviour she describes as manipulative, controlling, undermining, passive aggressive and bullying. However, Catherine initially thought she was in a ‘good relationship’, as it was free from the physical violence that she associated with domestic abuse. Her perception of abusive behaviour had been skewed by her childhood experiences: where she was ‘subjugated’, ‘neglected’, and raised in a culture in which everyone shouted at each other and where being ‘knocked around’ was the norm.

Catherine also experienced physical abuse in two other relationships. She was physically attacked by a boyfriend 23 years ago, and one of her sons has been violent towards her on several occasions. He has lashed out and hit her in the face, barged into her, and thrown her across the room.

Catherine’s marriage broke down in 2012 after her husband left her for someone else. After the relationship ended, Catherine’s friends started to comment that she had ‘gone back to who [she] used to be’ and had ‘come out from behind him’. These remarks helped her recognise that she had been pushed down by his behaviour during their marriage and that she had changed how she behaved to please him. Catherine also realised that his behaviour had led to her low-mood when they were together.

Catherine believes that she ‘wasted’ too many years of her life on her ex-husband and this can make her feel angry. However, she is using her experiences positively to influence how she behaves in new relationships. She is adamant that she will no longer bury her own feelings or constantly placate other people.

Catherine feels that it is important to educate men that it is inappropriate to ‘do certain things and to be a certain way’ in a relationship. She suggests that there needs to be increased awareness of how difficult it can be for women in an abusive relationship to extricate themselves, even if they themselves recognise that they need to leave. (Video clips played by an actor.)

Catherine wondered whether her son might have needed his dad around more, as he was ‘big and stronger than him’, when at times she felt unable to control her son’s behavior (played by an actor).

Show in context
SHOW TEXT VERSION
PRINT TRANSCRIPT
What’s the biggest impact that abuse has had on you and your life?

It’s changed throughout my life. I think, you know, I felt like a crap parent when he was small. I think I was made to feel like a crap parent by teachers, some of the time. I think, you know, culturally and, you know, from the media you feel like it’s your fault because you can’t control your child. But then, I think as things changed ... you know, as time went on it changed, you know, sometimes I felt like ... you know ... you know, that I just couldn't cope with it and, you know, I’d have to put him into care. Should I contact his father to deal with him, because I thought even though I don’t agree with the way his father thinks, maybe he needs somebody who’s big and stronger than him so that they hit him back. I don’t know. You know, I considered everything. And, you know, and some of it was ... you know, you’re trying to protect your relationship with this ... with your other, you know, adult significant other. It became clear when my older son got to about 16 that he ... you know, had actually suffered a huge amount from the fact that, you know, you’ve got this Tasmanian devil of a child living in your midst, and you never get any of the attention. So that made me feel, you know, really guilty. You know, his relationship with me wasn’t very good for a long time. He disappeared off, you know. He decided to go and live in [Country] for a year. That was like ... [laughing] you know. You know, and it was like, “I’m never speak to you ever again. You never looked after me properly.” You know, and that just ... that was devastating, absolutely awful. And then ... you know, and I think when he got to 18 I just ... mentally I just ... because I knew that, you know, he’s an adult now...

... it’s not my responsibility anymore. It was a massive kind of sense of relief and I think I was some of the time able to deal with it much more, but the trouble is, you know, when you find out that your child is, you know, homeless and ... and all of this sort of thing, and it’s like you can’t ... it’s very difficult to say, “No, you can’t come back home.”

So, I think we went through a lot of cycles of he would come back and be really good for a bit, you know, I would try and be really understanding for a bit and then gradually it would all kind of break down again.

Catherine described feeling exhausted all the time whilst in her relationship, and then after leaving, realising that it was because of the abuse she was suffering (played by an actor).

Show in context
SHOW TEXT VERSION
PRINT TRANSCRIPT
How did his behaviour kind of affect you and impact on you when you were together? What was the biggest impact?

I think it just made me depressed, I think, actually, to be honest, because I had loads of blood tests and stuff at the doctors because I’d kept going in saying, “Oh, God, I’m just so exhausted, I can’t do anything, blah blah blah,” and she kept going, you know ... you know, “Are you feeling depressed?” and all the rest of it and I was like, “No, no no,” because I think I felt normal because it had been happening so slowly.

And I think it wasn’t until afterwards that I suddenly thought actually I bloody was, for years, just depressed in mood and depressed in, you know, behaviour and my personality and I think I just subjugated everything about myself that he didn’t like ...

... for the sake of the relationship.

Catherine was fearful of opening up but eventually had several ‘rounds’ of counselling, where she learnt life skills which she was trying out in a new relationship (played by an actor).

Show in context
SHOW TEXT VERSION
PRINT TRANSCRIPT
And you accessed counselling, you said, through your GP. And that was when you were in your 20s?

Who else has that been through? How else have you accessed the counselling?

I’ve done it twice through staff counselling here, and only just finished. Well weirdly enough I only just finished the last round about a month ago, because one of the last things I talked to her about was the fact that I was going to come and do this...

... and I said, “Oh, you know, it’s a really good thing and I really want to contribute to it but actually I’m not really quite sure [laughing] what it’s going to do.” So she said that I can go back and see her for an extra session that I’m not really entitled to but she said, “You can have another session if ... if you feel like you need that after this thing.” So that was really good of her actually. So...

And how helpful or unhelpful has the counselling been that you’ve received?

This last one, much, much more useful than before, and I don’t know whether it’s because it’s a different person or whether I’m just in a different headspace now. When you talk about the biggest impact that all that stuff had on my life, I would say now the biggest impact that it’s had is that it’s kind of woken me up and, you know, I just ... I look at everything before it happens now. You know, the minute I start finding myself burying my own feelings or trying to placate people or running around after people, I just stop myself and think, “What you doing? What you doing? What you doing?”

So actually I think, in the end, it ... I ... you know, I’m turning it around and using it to inform ... actually making a choice about what I do in the future, and I thought, you know, I am not going to get into another relationship when all I’m doing is, you know, pouring oil on top of water all the time and being nice to somebody...

... and ... because I did start dating a guy that started chatting me up in the pub, you know, and then I suddenly after a bit it was like, “Oh, I’m doing it again.” And then ...and I broke up with him and for the first time I just thought, “Actually, I don’t feel a shred of guilt about doing that, because I know it was exactly the right thing to do.”

Catherine opened up to a counsellor, which was scary but helped her to deal with her current situation and her past (played by an actor).

Show in context
SHOW TEXT VERSION
PRINT TRANSCRIPT
And do you have any advice for other women who are currently in an abusive relationship as an adult, whether that abuse is from kind of like, you know, a sibling or a son or daughter or partner?

Well, I think with the thing with the counselling I was very scared to do that because I was frightened of, you know, trying to confront all of these feelings and all of these things. I didn’t really ... I think I didn’t realise until I went to do it that, you know, obviously counsellors are trained to be skilled so that that doesn’t happen to you and, you know, that, well ring me up if it ... if it does start to bother you kind of thing. So I think that I would ... I would say, you know, even if you have the slightest inkling to get some help, to get some help...

... because actually, as scary as it might feel, it’s better to do it in the long run because even though you might have to deal with lots of feelings in the long run you would feel better because you’ve done something for yourself, and you’ve faced up to it and you’ve tackled it and, you know, maybe you’ve admitted it to other people like in your family or something like that. I think because my family knew most of what I was going through and ... but because of their limitations they were just like, “Well, you should just leave then.”

You know, and it isn’t as simple as that, you know. Yeah. And talk to your friends and actually listen to what they say. And... yeah. Actually I think one of the things that I wish I’d done when I was younger was to talk to somebody about the things that I ... you know, the way that I kind of did things in my life and realised that, you know, I was doing things in a way that was programmed into me as a child and it wasn’t very normal. And, you know, I think you can make an assumption that that ... “Oh that’s just the way I am.”
Previous Page
Next Page