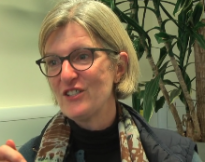 Kate gained weight in middle age, due to menopause and an addiction to sugar, which had a negative impact on her self-esteem. Kate was motivated to lose weight after concerns over her health, and succeeded in doing this by following a blood sugar diet. Kate feels that discussing weight is difficult, but the government should encourage healthy living through policy.

Kate is 58 and is self-employed. She has 5 adult children, all of whom have left home, and is divorced. She is white British.

Kate put on weight around the time of her menopause. Food has been a large part of Kate’s life since childhood. Eating large portions and puddings was a “family ethos”. Kate describes herself as having an addictive personality and believes that she had Binge Eating Disorder. She would eat mindlessly, and used food as a source of comfort. Sweet foods were a particular problem for Kate, and she describes sugar being like “crack cocaine”. After living abroad, Kate found the availability of processed and sweet food in UK supermarkets to be “lethal”.

Kate found that gaining weight had a negative impact on her self-esteem and confidence. When she was overweight, Kate considered bariatric surgery to stop her overeating. She felt “really desperate” at this time. As well as the emotional impact, gaining weight and her previous diet lead to digestive problems.

Although Kate has tried several diets in the past, she was motivated to lose weight after finding out that she had high blood pressure at a routine health check. Kate was “deeply shocked” to discover this, and decided to lose weight after her doctor suggested she take statins. Several members of her family also have weight-related health complications and have to take medication to control this, which Kate wanted to avoid.

Kate managed to lose weight by following a blood sugar diet, which involved cutting out refined sugar. Kate found complete abstinence worked for her, and lost weight quickly. Since losing weight, Kate has a much more positive self-image, and feels “fantastic” about how she looks. Kate no longer has problems with her blood pressure or digestion.

Kate has managed to maintain her weight loss through diet and exercise. She still avoids refined sugar, and controls the amount of carbohydrate she eats. Rather than forcing herself to do sports she doesn’t like, Kate cycles instead of drives, which she really enjoys.

Kate feels that policy has a role to play in encouraging healthy living and addressing the weight problems of the population. Stopping junk food being advertised to children and changing the lay-out of supermarkets are ways this could happen. She feels that the government has a responsibility to act, “we have a problem. It needs to be addressed”. Discussing weight is a sensitive subject, and Kate feels it is hard to know how to do this on an individual level. She questions whether GPs might be able to raise this issue with patients, but believes that ultimately, the decision to lose weight has to be theirs, “it’s got to come from within them”.

Kate also advocates for mandatory weight and blood pressure measurements for everyone attending a GP surgery, although patients should be able to ‘op-out’ of this procedure. It can be self-administered in the waiting room, and patients can hand the doctor a read-out of the results. This may help prompt doctors to address weight issues with certain patients.

Kate, a recovered alcoholic, comfort ate to change her feelings.

Well I will confess here that I’m a recovered alcoholic and that has a relevance in the binge eating because it’s the same feelings. So for example I used to drink to change my head. And I suspect the binge eating is the same. In fact it’s classified in the DSM in the same area that, you know, I used to eat, I comfort eat to change my feelings. I was feeling uncomfortable, feeling sad, feeling something and I used to immediately turn to food, to sweet foods specifically. And, you know, I’ve always done that so if I was making peppermint creams with the children for example I would end up eating them all, you know, but especially the scraps and things I’ve always had this inability to switch off the to, to stop. I’ve had this inability to stop. So I haven’t had a drink for 21 years so it was complete abstinence. But with eating it’s very difficult because it’s a process addiction. And you can’t stop eating but I have discovered you can stop eating sugar. And I don’t crave sugar and it’s now been since February. So I have actually managed to apply, apply the abstinence thing to sugar.

Kate’s family tell her that she is looking too thin now she has lost weight. Her sister didn’t speak to her for two years after Kate offered to help her lose weight.

I’m interested to find out what your family has, kind of how have they reacted? Have they been supportive or are they amazed or?

Well that’s interesting My sister says, “You’re looking too thin. You’re looking peaky.” She’s very obese and so. I once said to her, “What can we do to help you lose weight?” She didn’t speak to me for two years. So it’s a very sensitive subject in our family. And my father is always, my mother is always trying to make my father lose weight and it’s a sort of a family joke. And he won’t do it. And my mother she again says, “Oh you are too thin, you’re too thin. You’re looking ill.” They don’t, they don’t like it. They don’t like it.

…but sources of support?

Oh close girlfriends. Close girlfriends in fact another girl, a very dear girlfriend of mine has also lost a lot of weight recently but she’s been through a trauma, a marital trauma if you put it like that. So she and I are texting each other to say, “Look let’s go and buy some new pants and bras because we are too small now.” And so that’s been very supportive, very supportive. You know telling each other how good we look. And how we are having to buy new clothes and things.

Or dig out old ones, haven’t worn these for months for years. Yeah.

Kate asked her doctor if there was any alternative to taking statins and it was suggested that she lose some weight.

So two things changed it for me in February of this year and one was going to the doctor, [Health Centre doctor] where they have this amazing programme where they give you an MOT. They, I think it’s everybody over 55 they test their blood sugar, their cholesterol and their blood pressure and probably various other things. Anyway I was deeply shocked to find that my blood pressure was very high. And I, and there’s a history of it in the family but I always prided myself in being the slim one because I’ve got m-. Everyone else in my family is obese. And so I, I was very, very shocked. And they said, “Well you really should be on statins.” So I said, “Is there any other way that I don’t have to be on statins?” And it was suggested, and I grabbed this, that I lose some weight to see what would happen first. And so that was a huge incentive for me, absolutely massive because I don’t want to be taking statins every day.

Kate would have welcomed the opportunity to discuss her weight with the GP but didn’t want to waste the doctor’s time with “trivial” concerns.

Would you have welcomed the opportunity to discuss your concerns, your worries about weight and your sugar addiction and?

So it was you more?

Yeah but I did ask Dr [Name]. I said, “If I lose weight does that mean I don’t have to take statins?” And he said, “It could do. It could mean that.” So he

And that was all?

That was all. He’s a marvellous doctor and I’m quite sure if I’d had the courage to ask him more about it, you know, it would have, he would have gone deeper. But, you know, they only get 10 minutes. They can’t, they can’t

Ok so you were sort of, kind of conscious, too conscious about the time?

Definitely wasting his time. My questions being very trivial because I knew I was hovering on the, and I knew my family was obese, I know I could tip easily into obesity and I was well on the way to, to you know. I was going, I was on the trend but I didn’t feel it was something that he could help me with.

If Kate was running a General Practice, she would weigh every patient and chart their weight so that they could see what’s going on.

Ok. So to visually present?

Yes, you know because people go to the doctor at different periods obviously but if they could see unhealthy because, and that’s often related to, you know, overweight, it can be, you know, diabetes. Lots of lots of things diabetes - You know, making people aware of what’s going on and facing up to what’s going on is, I would have thought would be the first thing that I would do.

In talking about it you could then talk about it if there’s, if it’s obvious on there but you can do a lot. You could do it electronically.