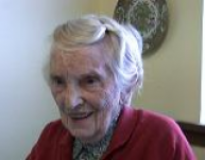 Age at interview: 88
Brief Outline: She had a stroke due to a clot aged 87 which caused right weakness and problems with balance and with speech and eating. Medication' atenolol, ramipril (blood pressure), lipitor (cholesterol), aspirin (antiplatelet), motilium (nausea and vertigo), omeprazole (gastric resistant tablets).
Background: Is a widow with 1 adult child and is a retired shopkeeper. Ethnic background/nationality' White/Scottish.

This woman had a stroke at the age of 87 she is now 88. Her stroke was caused by a clot that prevented the flow of blood to the left hand side of the brain. She now takes aspirin to prevent another clot forming; atenolol and ramipril to control blood pressure and lipitor to reduce cholesterol.

She initially experienced some weakness of her arm and leg but has been able to walk throughout. She has, however, had ongoing problems with her balance and has recently been attending classes on how to prevent falls at the local community hospital. She also takes motilium to help with feeling of nausea and vertigo.

She was able to return home but has some carers coming in during the day to help with some of the domestic tasks like washing and preparing her meals. Despite this she likes to remain as independent as possible and makes sure that she is up and dressed every morning when the carers come in.

Although she was initially frustrated at the loss of independence she has accepted her stroke as...

Although she was initially frustrated at the loss of independence she has accepted her stroke as...

View topic summary
SHOW TEXT VERSION
PRINT TRANSCRIPT
Do you think it's changed you emotionally at all?

No. I don't think so' Except it's' it's' I get frustrated' with not being able to do what I used to do but I've accepted that now. I don't know whether I'll be able to go back to being independent again. I'll be dependent on other people.

How do you come to accept something like that?

Oh well, I accept it quite' quite readily' maybe because I realise my age' You can't live forever [laughs].

She finds it takes her longer to wash and dress but feels it is important to do it herself before...

She finds it takes her longer to wash and dress but feels it is important to do it herself before...

View topic summary
SHOW TEXT VERSION
PRINT TRANSCRIPT
So when you were first in the hospital, you said that your balance was affected. Which side of your body was affected?

Right. My right hand side. Yes.

And were you able to get up and out of bed when you were first in hospital?

Yes. Yes. I was able to get up. I always got up and dressed myself and wash and dress myself in hospital, so that was a great help when I came home because I'd always done it. I didn't stop doing it.

I am very over confident for my age and I think that's the thing that' you see, some people my age and older, they just lie in bed as long as they can and they don't, they don't make much of an effort to help themselves.

Do you think that's important?

That's important and I' I concentrate and place great emphasis on helping myself, doing as much as I can for myself, dressing myself, washing myself or vice versa and' and' I think people of my age often give up. They just want to lie in bed' for most of the day. The carers come in at 12 o'clock and they say that the last, the last customer, she doesn't want to get up for another hour [laughs].

No [laughs] No, I get, I get up first thing in the morning like I've always done.

Her hair started falling out because of the medication she was taking. She told the stroke nurse...

Her hair started falling out because of the medication she was taking. She told the stroke nurse...

View topic summary
SHOW TEXT VERSION
PRINT TRANSCRIPT
And you say you have a stroke nurse come in, is that every week?

No. The stroke nurse comes a month, every month and she's very good.

What sort of things has she helped you with?

Well, she helped me with, with my hair' My hair's falling out and'

' And medication. I'm on medication and one of the effects was my hair loss. I've lost a lot of hair and so they've changed my medication.

And they changed it to something else. I can't pronounce and it was the stroke nurse who did that for me. I told her.