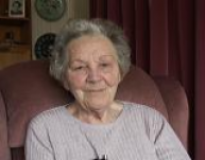 Age at interview: 83
Brief Outline: She had a stroke due to a clot from her heart at the age of 81. The stroke caused partial paralysis of her right hand side and problems with memory. Medication' Cardicor, coversyl (blood pressure), simvastatin (cholesterol), warfarin (anticoagulation).
Background: Is a widow with 5 children and is a retired voluntary worker. Ethnic background/nationality' White/Scottish.

This woman had a stroke at the age of 81 she is now 83. The stroke was caused by a clot that came from her heart which was beating irregularly. She also has diabetes which is a risk factor for stroke. She takes warfarin to prevent another clot forming, Cardicor and coversyl to control blood pressure and simvastatin to lower cholesterol.

Her stroke happened at home and she was found unconscious by her neighbour. The stroke caused right partial paralysis of her leg and arm, loss of vision on the right and some loss of speech. In the hospital she had some physiotherapy and is now able to walk with the aid of a stick. She feels her hand function is not completely recovered and is wary of using that hand particularly in the kitchen. Her speech has also recovered although she notices that it is not as strong as before.

She feels that the key to her recovery has been to keep trying to do things and even though she has carers she tries to keep doing things like dusting and the easy cleaning jobs. She used to read a lot but now uses recorded stories on tapes instead.

Explains that she just accepted the diagnosis even though it was clear that she would not be able...

Explains that she just accepted the diagnosis even though it was clear that she would not be able...

View topic summary
SHOW TEXT VERSION
PRINT TRANSCRIPT
And how did you feel when you realised what had happened?

Well, you just accept it. It has affected your speech and your memory, everything's affected by it and also your mobility. I mean, I drove a car, I, you know, I was a member of the, you know, all different associations. That all goes by the book, I mean, you lose all that, which is a pity.

She lost peripheral vision on the right and sometimes has to turn her head to see things on the...

She lost peripheral vision on the right and sometimes has to turn her head to see things on the...

View topic summary
SHOW TEXT VERSION
PRINT TRANSCRIPT
Can you describe to me what, what's the problem then?

Well, the, the right side was affected and although I can see, but I also see shadows as well with this eye, you know, which is a nuisance but I suppose that's just par for the course really.

How does it affect sort of watching the television or '

No, I'm, I'm fine because with one eye, I mean, you're, you've got perfect vision and with the other eye you've partial vision with that eye, so I can look at the television. Sometimes if there's something on the programme and you're supposed to look at the right side and you've to turn your head to look at it because you can't use your eye to, to look at it. That's the only thing but that's not difficult.

A carer helps her to get in and out of the bath and puts her support stocking on but she still...

A carer helps her to get in and out of the bath and puts her support stocking on but she still...

View topic summary
SHOW TEXT VERSION
PRINT TRANSCRIPT
And what about in the bathroom? Have you had any changes in there?

Yes. I've got a special seat in the bath and I am helped, every morning I get, somebody is here to help me to get in the bath and I can sit and shower myself and it makes me feel independent as well because I can do that myself. And as long as she's there to help me and help me in and help me out and she also, while I'm in the bathroom, she does my breakfast, so when I come out, I've got my breakfast all ready as well [laughs].

And how has that worked out having a carer?

It's worked out very well. That really has worked.

And do you always have the same person coming in?

Well, usually, there, they come for quite a while and, unless they go on holiday, then get somebody else but, I've known quite a few of them and they're all, they're all, they all know their jobs and that's very good. I've been very lucky.

And how do you find putting those on?

Well a nurse comes in the morn, every morning to put them on, to help, to put, well, she does put them on and I can take them off myself at night.

Try to do as much as you can for yourself and don't rely on other people or you'll lose your...

Try to do as much as you can for yourself and don't rely on other people or you'll lose your...

View topic summary
SHOW TEXT VERSION
PRINT TRANSCRIPT
Well, to try and do as much for yourself as you can and not rely on other people all the time and I think a lot of people just, you know... I think they just sit back and let other people help them too much and I think that way, you lose your independence. Maybe I'm wrong but it's the way I think, I feel about it.