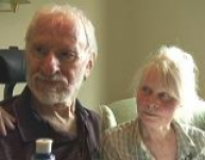 Age at interview: 69
Brief Outline: He had a stroke at the age of 63 and a second stroke aged 68 both due to a bleed. After the first he had right paralysis and could not walk. Since the second he is in a wheelchair and suffers some confusion. Medication' atenolol (blood pressure).
Background: Is a married father with 4 adult children and a retired writer/engineer. Ethnic background/nationality' White/English.

HIDE TEXT
PRINT TRANSCRIPT
This man is interviewed with his wife because he experiences some confusion and speech impairment. He had his first stroke when he was 63. At the time he was working in Spain and during a particularly busy day had overexerted himself in the heat and also banged his head. Although it has not been confirmed they wondered whether dehydration may have worsened his stroke.

Initially he was in hospital in Spain and even at this stage he was keen to walk again. He was flown home and spent some more time in hospital. After the first stroke he was able to recover his walking but was not well enough to return to work which was disappointing. He instead pursued some writing.

At the age of 68 he had a second episode which may well have been a stroke but they never had it diagnosed. Since then he has been confined to a wheelchair.

Recently his wife became ill and they realised it was no longer practical for her to care for her husband at home. He lived in a care home which they were both happy with. They have been very impressed with the quality and sensitivity of the care particularly when dealing with personal care. He is living at home again now.

Her husband initially went into care because she was ill and couldn't look after him. She...

Her husband initially went into care because she was ill and couldn't look after him. She...

View topic summary
SHOW TEXT VERSION
PRINT TRANSCRIPT
Wife' [My husband] came into a care home about six months ago because I suddenly had a stomach disorder out of the blue, it was extraordinarily painful and it lasted in fact quite a short time but, you know, it needed to be explored and so on. And so [my husband] was, you know, the family organised for [my husband] to come into care. But about the same time I developed another condition, a muscular condition which' although it's really well handled by medication, it's a bit prone to come back by too much pushing and lifting and that kind of thing. But that's not really the whole reason why you're still in care, is it, [Husbands name]?

Wife' I thought that there'd be more kind of life going on here really than at home when I couldn't take you out and about like I used to do. You know you'd be reliant on, you know, the odd friend dropping by, the children dropping by. I don't know whether it's worked out like that, but that was what, well that was what we thought.