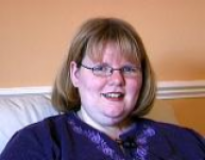 Age at interview: 29
Brief Outline: She had a stroke after an operation to remove a malignant melanoma. The stroke caused right weakness of her arm and problems with speech. Medication' aspirin (antiplatelet).
Background: Is a married mother of 2 who works as a driving instructor. Ethnic background/nationality' White/Scottish.

This woman had a stroke due to a clot at the age of 28. The stroke occurred after an operation to remove a malignant melanoma on her arm and a gland in her shoulder.

The stroke was caused by a clot that stopped the flow of blood to the left hand side of her brain.

As the result of her stroke she had some weakness in her right arm and considerable weakness of the facial muscle of the right. As a result she initially could not talk or write with her right hand. She also experienced some problems with finding words due to damage to the speech areas of her brain.

In the hospital she had some physiotherapy to help with the strength in her arm. She also had speech therapy to help with the facial weakness and improve her speech. She said that it felt like relearning speech as a child. The speech therapy and physiotherapy was very helpful but she feels that it should have been available quicker. Her speech has improved dramatically but she has had to accept that it might not improve completely.

She works as a driving instructor and was initially unable to drive after the stroke. She got back to driving fairly quickly but has struggled to get back to driving for work because of the problems with her speech. She returned to work part-time 7 weeks after the stroke. 4 months after the stroke, she was back to working normal hours, although it was a good 18 months/2 years before she felt confident in communicating with strangers. Nearly 4 years later, she has very occasional 'blips' with her speech and spelling but otherwise has made a full recovery.

She completely lost her speech after her stroke which she said felt like being trapped in a box....

She completely lost her speech after her stroke which she said felt like being trapped in a box....

View topic summary
SHOW TEXT VERSION
PRINT TRANSCRIPT
Okay I had my surgery on the Tuesday I think about well late morning and I think I was awake about three, four in the afternoon. I'm not entirely sure. I remember my husband coming to see me he'd got me some magazines and something to build to keep me entertained for my ten-day stay in hospital.

I don't really remember him leaving but I was quite groggy after the anaesthetic and obviously I'd had quite a major operation and they in the middle of the night I became aware of something not being quite right.

I just felt like I was inside this box looking out and I was just trying to communicate with my eyes and they didn't understand what I was doing, why I wasn't saying anything it wasn't really until the morning that it had become clear that I'd actually had a stroke in the night.

It was scary I've never, I have never felt as scared in my entire life. You don't appreciate how easy it is for people to talk to you and for you to talk back to them until something like that happens.

The stroke was on the left side of my brain and it was fortunately just a very minor one.


Her speech therapist explained that she had been left with a communication problem which made it...

Her speech therapist explained that she had been left with a communication problem which made it...

View topic summary
SHOW TEXT VERSION
PRINT TRANSCRIPT
And you said you wanted to see a speech therapist locally. Can you just go through how long you had to wait and what you do when you go to see her?

Okay, I went to, as I said when I was in hospital, I was seen by the speech therapist on the ward but I live quite a way from the hospital and I wanted to see somebody who was more local to me. Unfortunately she only has one adult clinic a week in my local town and we had to I had to wait about six months from the day of the stroke until I got a, an appointment with her.

So the first time that I saw her I'd already come on a huge amount in my speech and when she first met me she really didn't see anything that was wrong in my speech but I know myself, that I was struggling with certain things.

She described it as quite high level the things that I was still struggling with. But if she was to say, name me five emotions I would probably come up with happy and sad and wouldn't be able to give her another meaning or another word you know, she would say, 'Name me five zoo animals or pieces of fruit', and I would really struggle to name five of those things still because my word dictionary was still quite muddled.

She would ask me to give her an alternative word for, 'Give me another word for beautiful', and I would struggle to find another word that would mean that. So when I'm trying to help my child with his homework I am, you know, learning myself with his English and his literacy it was really helping me, helping him.

She initially found it difficult to talk to people particularly strangers. Her mum stayed around...

She initially found it difficult to talk to people particularly strangers. Her mum stayed around...

View topic summary
SHOW TEXT VERSION
PRINT TRANSCRIPT
I would find it extremely stressful if I was put in a situation where somebody didn't know me that I had to talk to somebody, even if it was in a shop because they wouldn't understand why I was really struggling with words. Close friends and family knew what had happened but I wouldn't answer the telephone, everybody else around me I would make answer the telephone because I didn't, didn't want to talk to anybody and try to explain what had happened.

So I would, if a friend had called they, all my friends knew that I was going for an operation so you know a few weeks later when they were phoning to see how I was, my mum who had come down the week before I went into surgery and ended up staying for about six weeks I think to help look after me and the children.

She would explain what had happened and then I would then speak to, to people. But I couldn't, I couldn't make any plans for going back to work or anything that was very, very difficult.

At the start she could not speak at all and had to go back to being like a child and practicing...

At the start she could not speak at all and had to go back to being like a child and practicing...

View topic summary
SHOW TEXT VERSION
PRINT TRANSCRIPT
The speech therapist gave me some, initially some sounds to start trying to make sort of going ooh and ah you know, very basic noises and having to go ttttt but at that point, that was I guess what I needed.

It sounds a bit kind of silly now but when I couldn't say or communicate really in any way at all, I kind of almost had to go back to re-learning a skill that you really take for granted. You think of a child and how they learn to speak and you've been speaking all this time and you're having to go back to basics is very, very strange, quite unnerving and you just don't realise how much you take for granted.

So I was just given various exercises and saw the speech therapist a couple of times on the ward and then had another appointment with her a couple of weeks afterwards. and in those two weeks I'd made quite a remarkable progress and she was, and then she was trying to give me ideas on how I could work on my, my writing and how I need to start.

Basically she was describing to me how my word dictionary had been muddled up but you have, you have all your zoo animals in one section and all your farm animals like under another little category and it's like a big filing cabinet in your head and basically everything had fallen out of my filing cabinet I would say. And that was why I was struggling so much to find words that I needed.