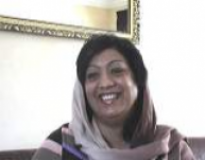 Age at interview: 37
Brief Outline: Mother discovered through screening in pregnancy that she carries Haemoglobin D Punjab. Her husband is not a carrier. Newborn screening showed her second baby is also a carrier. Video and audio clips in Urdu.
Background: Secretary of own business, husband runs own business. Two children aged 3 years and 18 months. Ethnic background/nationality' Pakistani.

This mother had screening in her first pregnancy and was told she was a carrier of haemoglobin D Punjab. Her husband was reluctant to be tested because he does not like needles, and neither of them was particularly worried. Her husband was tested after the baby was born and was found not to be a carrier. Her first daughter was also found not to be a carrier.

In the mother's second pregnancy, the counsellor came to her home and explained a lot more about D Punjab. At first the mother was puzzled by the name 'D Punjab' as she herself is not from the Punjab. However, the counsellor explained that this was just a name, and it did not have anything to do with where the person comes from. She also explained that it is not an illness and the mother and baby will not be affected by being carriers. The second baby is a carrier of Hb D Punjab.

The mother feels glad that she has found out more and that she knows her second daughter is a carrier. It will be important to tell her when she is older, especially when choosing a partner and making sure the partner is not a sickle cell carrier. The combination of D Punjab and sickle cell genes could cause problems for children born to that couple, as each child would have a one in four chance of having a sickle cell disorder called haemoglobin SD.

She feels it is important for parents to take responsibility for their children's health and find out as much as they can. Although she would never consider terminating a pregnancy affected by a condition like Hb SD disorder, if you know it is a risk and you can prevent it that is what she would do - either by not marrying another carrier or by avoiding having any further children if both partners find they are carriers.

Her husband did not want to be screened during pregnancy, but the midwives persuaded him after...

Her husband did not want to be screened during pregnancy, but the midwives persuaded him after...

Why were they asking for your husband's blood?

Because my husband could have D trait, or S trait.

'and in the first pregnancy'?

They forced him a lot in the first pregnancy too, that 'we have to take the husband's blood', but he did not give it.

But you were not told why they wanted'?

'no, I wasn't told, or maybe I didn't give it much importance, because if I was told that 'it is this, like this, this would happen' then I would have given it some importance, but I was so happy that I was pregnant, that's it. In that happiness, I didn't realise' I even ran around like this, and they said 'oh, slow down'. And on one occasion I even fell, there was a little snow, and my sister-in-laws were more worried than I was, that 'what will happen?' I was alright, because I was' my pregnancy passed completely well, I didn't even realise what the nine months were like. There was just this happiness and happiness, that 'I'm going to be a mother', so I was so pleased.

So then, you said that they were forcing your husband. Did he then have testing during the pregnancy?

My husband was with me when the baby was born. As soon as the baby came out, they grabbed my husband, that 'now you will have to give blood', because my husband would not agree to have his blood tested. 'I'm fine, I'm fine, I don't have anything like that, I have nothing like that', he just runs from needles.

Then did he give it?

When he was caught, then where could he run? Then they left him after taking his blood' Where would they leave him!

What did they do after that, after they did the test?

They tested him, and his was normal. So they were alright. He has normal haemoglobin. Mine is D trait, but he is normal.

There are worries when both are the same or he has S trait, but he had normal haemoglobin. I am haemoglobin D. So that does not affect the baby.

She was puzzled at first to be told she carried haemoglobin D Punjab. Once she understood it was...

She was puzzled at first to be told she carried haemoglobin D Punjab. Once she understood it was...

To tell you the reality, when they said that 'you have D trait Punjabi', so because I'm not from the Punjab, not from the village, I thought people from the village can have such a problem. Because I'm not Punjabi. I'm not from Punjab. I was not so worried. I said that 'I can't have this', and anyway, I didn't have any problem. If I had some problem, or if the baby had something, like this one had [referring to younger daughter], then I was worried 'what has happened?' But when I read the information, it's not an illness, so why should I worry?

So what did you gain from the information about what this is?

Footnotes' people often need help in understanding the difference between being a carrier, which is not an illness and does not affect your health, and having the condition. It does not affect the baby's health if one or both parents carries haemoglobin D Punjab. However, if one parent carries haemoglobin D and the other carries haemoglobin s (sickle cell) the baby has a 1 in 4 risk of having a sickle cell disorder called haemoglobin SD disorder as this woman later learnt from her counsellor, the name 'D Punjab' can be misleading - it does not mean that only people from the Punjab can carry it. The word 'trait' is sometimes used to describe carrier status.

Screening helps parents find out as much as they can about their children's health.

Screening helps parents find out as much as they can about their children's health.

I think everything is covered, but I would like to make a request to those parents who think that we should not know. Look, your children' as long as it is in your hands, we have to care for the child, we have to educate them, and this is all there is. What do we give our children? We bring them up. Everyone's children grow up, but good parenting is everything. Use whatever knowledge you have, and obviously knowledge is not useless. This is the thing. And we were not bothered when we didn't know, because, thank God, this is not a problem, but at least we can tell our daughter in the future. Now it's up to her to act on it, but it is our duty to tell her. And if she marries according to our choice, then we will put this forward first. Everything is on one side, but the future, whoever your future is with, you should have this much information about them.

She will advise her daughter not to marry another carrier. Parents have a duty to protect their...

She will advise her daughter not to marry another carrier. Parents have a duty to protect their...

Okay. Are you happy that you have been tested and told about this D Punjab?

Yes, absolutely. I am most happy that at least my daughter will know when she chooses her partner and she will know that she would not marry such a person.

Some people are such that they would say, 'No, no, if D Punjab doesn't make a difference to the individual then they shouldn't be given much information, you shouldn't worry them because their children are still young', etc. What do you think?

No. At least parents should know. Children are young, but will grow up tomorrow, and obviously they have to face their future themselves, so you should tell them first (parents should tell the children). At least the parenting is in the hands of the mother, hands of the father. We teach them. When they grow up' in childhood you say, 'Don't go there, dear' - then doesn't the child go there when he grows up? But at least you have told them not to. You have done your duty. We think parents should be given as much information as possible about their children. This is our duty.

I was just asking because some people say that if 'No, if we give this information, then parents will become upset''

No, no, no. What is there to be upset about? No, no, there is nothing like that, and individuals should know. Look, knowledge is never disadvantageous in any way. Thank God that my husband does not have it. If he had it, then we could not have done anything, but we did not know at the time. If we knew, then we would have taken steps after consideration.

Interestingly, you said that you would not have done anything. What do you mean by this?

It means that if we were married and there was no haemoglobin problem in the first baby, but we would have stopped the next time. If my husband had the S trait and I have D trait, and luckily the first baby did not have it, then we would not have had a second child.

Okay, so you wouldn't have done it'

'because we would have taken precautions. If we know that the child will be disabled, then why should we have such a baby, for whom his own life will become a problem? This is how we are thinking.

Some people say that if there is a chance of this happening, then they can test you in pregnancy. For example, thank God that your husband is normal and he did not have S trait, but if he did have S trait, then you would have told that you could have the baby tested'

'I would have definitely had it if it was curable. Because, look, I would have done whatever was in my hands, the rest is up to Allah, what an individual do in front of him.

These tests are usually done because it is not curable, so you could have a termination?

But, I would not have done that.

Yes. It is not wrong to take precautions before pregnancy, but even if the baby is disabled, in pregnancy, and I knowingly became pregnant, then I would never terminate my baby. How could I kill something to which God has given life? Yes, I would take precautions the next time, that I would not have a second child.