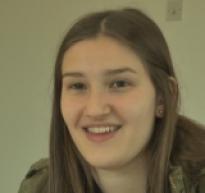 Age at interview: 16
Brief Outline: Isabella received the HPV vaccine in Year 8, aged 14 as part of the National HPV Vaccination Programme for girls aged 14-18. A nurse talked during school assembly about HPV and the vaccination programme. But Isabella feels that an early school assembly may not be the best place and time to provide sexual health information as young people may be tired and not very attentive to what has been said.
Background: Isabella is a full-time student, doing A –levels. She lives at home with her parents. Ethnic background: white.

Isabella received the HPV vaccine when she was in Year 8, aged 14 as part of the National HPV Vaccination Programme for girls aged 14-18. Information about the HPV vaccine was provided by a nurse during school assembly. Isabella said that the aim was to provide a brief, general talk about the HPV virus, cervical cancer and the HPV vaccine. She was given an information leaflet and a consent form to take to her parents. Her mother thought it was a good idea to be protected against cervical cancer and gave her consent. Initially Isabella was a bit unwilling to have the HPV vaccine because she dislikes injections, but she is happy to have had it done. She had three injections each at three months interval. She didn’t experience any bad reactions, besides a sore arm.

Isabella remembers that a number of girls at her school didn’t have the vaccine because their parents were concerned about the possible effects it might have on their daughter’s sexual behavior. Isabella disagrees with this view and says that most girls that age aren’t having sex and that, in any case, it is better to be protected.

In general she thinks that the National HPV Vaccination Programme provided enough information and advice but thinks that a follow-up session is needed, after the vaccination programme is completed, to remind people what they’d learnt from the nurse’s talk. Isabella also thinks that an early school assembly may not be the best place and time to provide sexual health information as young people may be tired and not very attentive to what has been said.

Isabella feels that she was given enough information about why it was important to get the HPV jab but incorrectly thinks the vaccine provides protection for life.

Isabella feels that she was given enough information about why it was important to get the HPV jab but incorrectly thinks the vaccine provides protection for life.

View topic summary
SHOW TEXT VERSION
PRINT TRANSCRIPT
Well they gave background information on like how it’s brought about and, you know, the effects and the long term effects. And I know it got introduced because of the death of Jade Goody and so it was, you know, how it can happen to anyone and so it was quite relevant at the time as well. So they just, yeah. I mean they didn’t go into it like a great depth of like science but it was like they told us. They talked about the virus itself and like, so yeah.

What do you think about it?

I think it’s great. I mean for someone who might not know about it and who isn’t in a position to find out about it it’s an amazing thing and it’s free. And it’s protection for life essentially against something that is so common and it’s treatable so I think it’s just. And they give you information about it so.

Isabella feels that more needs to be done to make sure young women understand that the HPV vaccine doesn’t prevent STIs or unwanted pregnancy.

Isabella feels that more needs to be done to make sure young women understand that the HPV vaccine doesn’t prevent STIs or unwanted pregnancy.

View topic summary
SHOW TEXT VERSION
PRINT TRANSCRIPT
I think maybe, maybe a follow-up as in like maybe a talk afterwards to be like, ‘Do you really understand’ because it happened and we had the vaccines and then we never heard again about it. So I don’t know, you know, maybe.

That’s a good idea, a good idea. So do you think they should do a follow-up in terms of give you more information?

Ok so for instance a health professional, a nurse or a doctor to go and say, ‘Ok you are…?

Yeah. So you’ve had the vaccine and this is the next steps.

I think because with us it was very much we had it done and that was it. We never just spoke about it or heard about it ever again. We just had the vaccine.

Definitely to solidify the fact that like if you do choose to become sexually active like it doesn’t protect you, it definitely doesn’t. And you know maybe, you know a bit more information on the severity and like of the disease and like, you know, how good, maybe you know, pass information on to other people and like basically break down the ignorance that people might have towards it. I think.

What do you mean by it doesn’t protect you?

For example against it’s like Chlamydia or, you know you still have to. You know it’s not going to stop you from getting pregnant so you have to still use protection. I think a lot of people saw it as maybe that, ‘Oh ok so now I’ve had the vaccine it’s alright to, you know.

Not to use condoms or?

…or other forms of contraception.

That’s very important because I mean it’s sort of misconception and lack of information of understanding what the HPV vaccine is really for.

Some of Isabella’s friends didn’t get the HPV vaccine at school due to parents’ concerns, including fearing that daughters may become sexually active after being protected from HPV.

Some of Isabella’s friends didn’t get the HPV vaccine at school due to parents’ concerns, including fearing that daughters may become sexually active after being protected from HPV.

Did you talk to your friends about it?

Yeah. A lot of my friends didn’t get it done.

Maybe afraid of the unknown. I don’t know. They just, they, a lot of parents weren’t comfortable with having their children having it done so quite a few of them didn’t have it done.

Was there any reason, why they were not…?

Because you know a lot of parents thought that if they had the vaccine that then they would see it as like they, if they would but they’d become sexually active or, and it would be like an excuse and they could, they were able now because they were, they had the vaccine. So I mean and also just because it had just been introduced so like they weren’t too sure about it. So also some parents just preferred to get it done through their GP and didn’t want to have it done through the schools.

But what would you say to parents who have this attitude, these concerns?

I mean if their, know their children. I mean I personally wouldn’t see it as a reason to go out. I wouldn’t think like that but I guess some parents are afraid that that might be brought about by, from having the vaccine but I mean I think if your children are going to become sexually active at least know that they are safe. I think that’s, think that’s the best thing.
Previous Page
Next Page