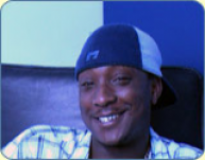 Age at interview: 23
Brief Outline: He says he has no problem with using condoms and strongly advises other young men to use them.
Background: He is a father of two who is in full-time work and his partner has recently finished studying. He describes himself of mixed black ethnicity.

Explains the ways in which he helps with household chores.

Explains the ways in which he helps with household chores.

View topic summary
SHOW TEXT VERSION
PRINT TRANSCRIPT
I can't really tell you it's just natural to me, like I says the way I grew up. So I always cook the food anyway.

You know we all, everybody knows when a black man is hungry he cooks his food, his belly has to be full so remember that! So yeah I cook my food.

But helping around the house I can't tell you how much times I help around the house because I mean I don't do it to like you know to count, I just do it. So after I cook food I clean up the surface and I wash the plates you know

I mean if she's out and the floor and the floor needs to be vacuumed, I vacuum the floor, vice versa, I can't really tell you how much. But the place is always clean because we just clean it, we don't say "Oh well you wash up," or whatever, it's just whoever does it first does it, it just gets done, it's just no problem.

Thinks that sex in a long term relationship is more enjoyable.

Thinks that sex in a long term relationship is more enjoyable.

Well alright one night stands, nah because I mean when you're in a stable relationship you have, you know what I mean, you enjoy it because of your partner, these people it's just done there's no feelings involved or nothing like that, it's just, it's almost like a hobby or a job you know we don't, it's nothing.

But I mean the difference in a stable relationship you enjoy it, you now what I mean you're comfortable, you feel nice but with these one night stands there's just nothing involved in it. So that's why it's a one night stand and you can just do whatever, you have sex and then tomorrow you don't want to call back the person or they might do it to you, vice versa, you never know because there's just nothing involved in it.

It's a physical thing then?


Advises others to wear condoms to prevent STIs and unwanted pregnancies.

Advises others to wear condoms to prevent STIs and unwanted pregnancies.

Okay is there anything you would want to tell other young people regarding sexual health in general or sexually transmitted infections?

If you suspect you have anything then make sure you go to the clinic right away you know, or talk to someone you can trust about it, may be get some moral advice from them. But otherwise just always you use contraception, I mean especially the guys, make sure you do. You know what I mean because if anything comes to worse it's always you, so make sure you do.

Did not know where to go to get emergency contraception in time.

Did not know where to go to get emergency contraception in time.

And your partner didn't use emergency contraception then?

At the time she didn't know because we were trying to go to a clinic and they were trying to book her in for an appointment and you know I mean, some of these clinics are weird.  And we're trying to find a walk in and then you had to register with some walk-in clinics but they said you had to be registered to that area so it was kind of, time went kind of quick because you've only got about three days.

You didn't go to your GP at that time, you and your girlfriend didn't go to a GP to get emergency contraception?

No she wasn't going to go to the clinic because she moved address at the time, she had to change her GP. You know the GP was away away so that's why we thought about the clinic. We looked at one of the posters, you know where we usually go and play some basketball, it's in there so we thought right we'll go and check this place and we went to this place and that's what they were saying, you have to register.

Explains how their lives had to change before and after the baby was born.

Explains how their lives had to change before and after the baby was born.

View topic summary
SHOW TEXT VERSION
PRINT TRANSCRIPT
Oh right, first of all I was, how old was I, nineteen, I was nineteen when I first had my first child.

Yeah we, we sorted out some housing and I had to leave out of the college accommodation and we had to get housed together we had to go to the council and get some housing. Because I mean she couldn't stay in her sister's place because it would be over crowded and I couldn't live in my college place so we had to live somewhere.

Okay and after the baby was born did you carry on studying or...?

So now I'm finishing the last of it, because I mean I got back into it eventually, you know and I mean the, it's easier, it's a lot easier now because I mean obviously for young women there's a lot more opportunities for them and if you want to study they can get you a cr'che or help you with child care, than what it was in my parents' days when there was none of that. So I mean that also helps in a lot of ways.

When there's a new born baby you have to drop out for a while but when the baby is older like six months onwards you can go to a cr'che and take up from there.

Explains that at fourteen he was thinking about sex but wasn't ready to do it and how his mates...

Explains that at fourteen he was thinking about sex but wasn't ready to do it and how his mates...

View topic summary
SHOW TEXT VERSION
PRINT TRANSCRIPT
How old were you when you had your first experience?

Because I've an older brother, I would say about going on fourteen.

I mean you get a lot of, I mean for young boys it's different, I mean it's like a buzz, it's like you're the king, you're the king when you do this, I mean I don't know I mean I just thought well hey let it be you know what I mean, I went to school I told them you know my brother had some chick round and she was telling me blah, blah, blah and I did blah, blah and they're like "Yeah that's great." So yeah.

Yeah I mean it's really the society you live in you know, I mean, I mean it was, it was crazy man I mean I didn't know whether to feel good or bad about myself at that time because I mean it's like it was meant to be a good thing, so I just thought well, because I just knew about it you know.

Thinks that communication and understanding are important elements for a good relationship.

Thinks that communication and understanding are important elements for a good relationship.

View topic summary
SHOW TEXT VERSION
PRINT TRANSCRIPT
In the context of a serious relationship how important is faithfulness?

No point you kidding yourself and blaming yourself, you're playing with their feelings and you're playing with yourself. I can't really see how am I going to be with my girl. I'm spending money taking her to the cinema or etc, or she's spending money vice versa,  it's gong to be a waste of time and a waste of money when rather I can hold my money and go to hotels and see how many women or whatever.

So you've got to have understanding, they'll say "Oh quiet, you're talking rubbish" and then it's going to cause more arguments and friction. So I mean realistically communicating and understanding will make everything come within the relationship faithfulness, love, happiness etc.

Indicates that he and his partner use condoms as their main form of contraception, that men are...

Indicates that he and his partner use condoms as their main form of contraception, that men are...

View topic summary
SHOW TEXT VERSION
PRINT TRANSCRIPT
It's me and the way life is if the woman becomes pregnant it's his fault, it's all, it's just, it's just the way life is. Some things you have to just accept in life. I mean it's like obviously you could have a daughter and your daughter come back pregnant you're going to look on the guy, it's always usually instantly the guy you know.

So it's the same with sex, when it comes to contraception they usually look, it's always the guy you know what I mean?  So like if a girl come along and say "Mum I'm pregnant," my dad would go "Where is he?".  It's always him you know they're looking at you. You know what I'm trying to say, and if I'm the one who got the girlfriend my mum is going "Well where was your contraception?" it's you, so as a guy it's usually you that answers, the arrow is on you. So I'm really responsible for it mainly yeah.

So everybody, I can't really generalise because in my age group there's a lot of people, some bother, some don't, some are very conscious, some are not so conscious. You know what I mean.

Okay, the ones that do bother, why do they bother?

Because realistically when it comes to sex it takes two so if you say "I ain't got nothing," but the girl is still saying "Come on then," then he ain't going to risk no temptation, same vice versa so it's really they encourage each other so that's why they do it.
Previous Page
Next Page