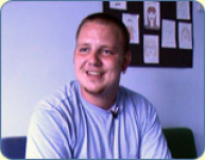 Age at interview: 22
Brief Outline: He gets his condoms free of charge from a family planning clinic that operates in his neighbourhood.
Background: Young father of a three-year-old son and a seven-month-old baby. He and his partner are not planning on having any more children. The first time he went to a Family Planning clinic he was sixteen.

Says that after talking to a friend, he decided to go to the family planning clinic to get his...

Says that after talking to a friend, he decided to go to the family planning clinic to get his...

It was really during school. Like when they had the sex education classes, where they show you like videos and stuff like that. And there's a Family Planning Clinic in [town] which... I was round about 16 when I first went down there and that and they give you like free condoms, contraception and things like that. So I mean they would give you leaflets to read about it like, illnesses and all stuff like that.

And how did you know about family planning?

I heard about it off one of my mates, he was a couple of years older than me, like he said 'I've been going down here for a few years,' he said, 'they give you a few, like will last you a life time", but he went like where it is, if you know, were worried about anything or wanted any advice they're there to help you to get through it and stuff like that, 'cos he's had a few...

He didn't really go into detail but he's had a few experiences where he thought something was wrong, so that's how they helped him out and that's how he got me to go down there.

And when you went to the Family Planning Clinic, can you tell me, how was it?

It was very nervous first of all, 'cos he's talking to a complete stranger about like your very private life. But no it was, it was OK, but like they made you feel very at ease and they have a laugh and joke with you and...

And you saw a female or male doctor?

It was female actually.

Yeah. That did make it a bit like, at the time, but the bloke who, the mate who showed me the place and that, he said 'No she's a very lovely woman, any problems just speak to her about it and she'll tell you the best way, go and see your GP, or anything like that.'

What questions did you bring up in the interview?

It was just like when I walked in there like and I just waited for me appointment, and went in there and I said that 'I'm thinking about going further with a few like, with me girlfriend and that,' and they went 'Is she on the pill?'  I said 'Yeah, she's on the pill, but I also want to use contraception meself.'  So it went, it went on for nearly, it was just like a basic sort of things like what was it? It was a basic things like going in there like speaking to them and how like, they don't ask, they don't push you for the answer for questions and that, they like say 'Well is it, if you want to use it, what is it for?'

And it's like I said to them 'It's for me girlfriend it's so I don't have no mistakes or anything like that.'  And it was just basically I went a couple of times after but then I met, and all that sort of thing, met me other half and we've gone on from there sort of.

Says that his second child was planned and that he does not want any more children.

Says that his second child was planned and that he does not want any more children.

I've got two at the moment.

Yeah, the second one was planned.

So like we planned it, we planned it, worked it all out, see if we can afford it. And well it worked out all right and its nothing with the first scan, but they didn't really pick it up on the first child, my first child [son], until he was about, till the second or third scan, then we had to start going to [town] to have like special scans and make sure everything was ok. But everything went brilliant with like my daughter, my second child.

But no, we still use like, she's on the pill at the moment, I use, when we do do it, I still use contraception and 'cos, I wear, I've got two, one of them I ain't having no more. I've got one of each which I'm very proud of, and I've got two kids and I'm done with kids.

Do you know why?


Explains the financial and social limitations of being a young father.

Explains the financial and social limitations of being a young father.

View topic summary
SHOW TEXT VERSION
PRINT TRANSCRIPT
So there, there is positive side in all that, you can do more with 'em. But also there's not so much like good thing 'cos you, when we first had children, we wasn't financially ready and we did, we did like struggle a lot for the first year, eighteen months.

So I mean thank God for like my family and my other half's family to be able to help us to get through. But there, that's like the good reasons and bad reasons of having kids, children young and waiting, do you know what I mean, waiting till you're a bit older, so you get financially ready.

But it ain't too bad at the moment 'cos like I get through, where I'm signed on at the moment, get the money through, we struggle each week with that, but as long as all bills are paid, I've got food in the cupboard, I've got stuff for them to eat, drink, I'm happy with it, as long as there ain't nothing, I don't care if I've got no money left in my pocket, as long as there's stuff in the cupboards for my kids and my other half and myself obviously.

But no, when there's crisis you've just got to take your time and don't like, don't shout, don't scream, don't panic, just go over and that, try and talk them out of it, 'cos if you don't talk them out of it they can go on for ages, I found that with my first one. It does take a while to get them out of it.

How long have you been out of work?

I used to a hell of a lot go out at weekends, I used to be out like Friday, Saturday night, out clubbing and that, and I used to be like down the pub three or four nights a week.

I did, up to about, even about a year ago I did miss that a hell of a lot, but what with me and the other half, we, we try and like save up enough money at least once a month, one of us go out, so that way she gets a night out to relax, enjoy herself, then month after I get a chance to go out, but it don't always work like that, 'cos nine times out of ten a bill comes up, so you can't always go out and do what you want to do.

Indicates that his main motivations for having sex were curiosity and peer pressure.

Indicates that his main motivations for having sex were curiosity and peer pressure.

SHOW TEXT VERSION
PRINT TRANSCRIPT
It was bits and pieces, I mean it was curiosity and pressuring, like all me mates going 'yeah I've done it,' all that acting big, you know, I've done it and a bit frightened. A bit curious and no, it was, I was with a girl that I like I was with her for about six/seven months and like she was up, had been up for it for ages and I wasn't.

I wanted to take things slow rather than just jump into it, you know. So I was taking things slow, but no, it was mainly like curiosity and people trying to put the 'I've done it like,' you know like when like all your mates area yeah, yeah, they've done this, done that, and you're curious.

Explains that teenage males find it very difficult to talk about sex and describes a conversation...

Explains that teenage males find it very difficult to talk about sex and describes a conversation...

View topic summary
SHOW TEXT VERSION
PRINT TRANSCRIPT
Blokes go 'yeah, yeah like I lasted seven hours last night' do you know what I mean.  He said a mate said to him 'oh I was going on for ages,' and everything and I said 'don't worry about it you can only do what you can do.'  I said 'You can't push nothing on, like you can't make yourself last that long.'

I said 'You can only last as long as you last.'  I went, because like a lot of his mates like, 'cos he's a lot like I was, he hangs around with people older than him, see he gets a lot of pressure like from the older lot.

So like they're like a lot more experienced, they'll have done... I said to him 'You can only get better with experience mate,' I went 'you can't just jump into bed with your girlfriend and like do a lot of stuff, you can't do that mate.'

I went 'you just get better with experience and if you stay with the same girl,' which like I think he is because he's really locked in for about eighteen months, I said 'Stay with the same girl,' I went 'like you'll get the hang of it.'  I went 'You might be all right first of all.'  I said 'You might be able to do it first of all because I didn't.'  I went 'I was a nervous wreck when I first done it ' I can't remember much about it 'cos like I tried to blank it out of me mind as much as I could, that first time I done it, I was like oh no, forget about that time.

But no its, I said to him like I explained to him about the first time because I didn't remember much bits about it and I said 'You can only do what you do, just try your best. Don't let no one put pressure on you, just take it as it comes.'