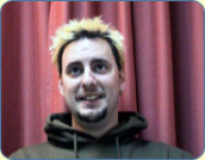 Age at interview: 18
Brief Outline: He sought information and advice from his GP about sexual health but found his GP most unsympathetic. (Played by an actor)
Background: A level student who lives in a small rural town and recently decided to come out to family and friends. Says that he has a very supportive teacher. (Played by an actor)

Found his GP in the village unhelpful and unsympathetic when he tried to obtain advice about...

Yeah, a couple of months ago, about six months ago I went to the doctors just to get some information it was, I don't know why I did it, I just thought having unprotected gay sex, maybe I should just find out a bit more information about it.

So you went to your GP?

He said 'oh we'll give you a print out' and that was it, he said 'just collect the print out from the desk and that'll be it' and that was it. He gave me reams of paper about everything to do with these diseases but it didn't actually help me at all.

Medical information about it that didn't kind of, I didn't need, I didn't want, I wanted to talk to someone about what I could face, how I could go about getting treated for it or being tested for it or how it would affect life, and I just got pieces of paper for it and I laughed and just chucked them in the bin.

I flicked through them and I just, I actually brought them in to show the deputy head because I thought it was so hilarious that he'd just given me these pieces of paper and practically said there you go, that's it, that'll do, so I just, I just thought I got, I just laughed it off.

I had to laugh it off because if I hadn't laughed it off I really would have started getting really angry with it because to have a doctor, a medical professional saying 'oh I'll give you a piece of paper to tell you all about it'.

That made me feel so small, it made me feel like I was worthless, that I didn't even deserve to talk to someone about it, that was hard because it didn't help me at all, it didn't give me any of the information that I wanted, that I needed, at which point I gave up.

I couldn't be bothered to look for any more information on it because if the health services have got such a low opinion of gay people or sexually transmitted diseases and infections, then what's the point of looking any further, because they obviously really don't care about it.

Based on his own experience, he argues that Section 28 is not allowing children at schools to...

You're not promoting it, you're letting people make their own minds up and that's what I found really hard because until I started talking to my deputy head, who isn't promoting homosexuality, she is giving me advice, until I talked to her I thought the world was against me, I thought I'm going to be an outcast, I'm going to have to live in the sticks or something and nobody is going to want to talk to me anymore and it took someone to actually say no, it's not like that at all and for me to actually think 'okay I can do this'.

Describes his feelings and fears before coming out. (Actor)

Yeah, because I didn't know anything else, I wasn't told anything else and it was left to me to kind of discover this thing that I was. I was scared, I was worried about what I was, I mean I went through kind of all sorts of like, I went through depression because of it, it was like god what the hell am I.

I didn't know how to handle it and I finally just said 'this is who I am and I can't do anything about it' and that's kind of what happened.

How old were you when you had depression?

So you went to your doctor for your depression?

Actually no, I went to my drama teacher first, just someone that I knew, someone that could help and they actually put me in contact with family and social health services or something, and I got a counsellor assigned to me for the best part of six months, but I couldn't tell them what it was, I don't know.

It's starting to change thankfully now but there is so much negative press about that you just, you fear that something's going to happen to you, you fear that you're going to get your head kicked in, or if you say 'oh actually I'm gay' you think that half of your friends are going to start beating the crap outta ya.


Explains why he trusted one of his teachers to talk to about being gay. (Actor)

Yeah definitely, you've got to, I found a teacher who I knew would kind of support me with whatever, I knew that I could talk to her about anything and I frequently do, and I hope kind of once I've left school that I'll still keep in contact her because she helped me a hell of a lot.

And sometimes it's funny because like I've always talked to her about any decision that I'm going to make and a couple of weeks ago I made the decision on my own and I came in and like, I've made the decision on my own, I didn't need you and it's not that kind of that kind of friendship, relationship, and it's not a teacher/student thing, at that point you're talking on a almost friendship level and when it gets to talking about being gay, you've got to be on a friendship level, if you're talking on a teacher/student relationship it isn't going to work, you've got to be on good terms with the person you're going to talk to.
Previous Page
Next Page