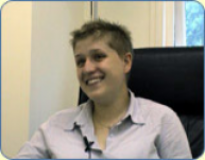 Age at interview: 19
Brief Outline: Her mother and siblings have been very supportive since her coming out.
Background: Young lesbian woman who lives with friends and is studying at University. At the time of the interview she was also looking for work.

Argues that lesbian and gay people are treated differently in society.

Argues that lesbian and gay people are treated differently in society.

View topic summary
SHOW TEXT VERSION
EMBED CODE
PRINT TRANSCRIPT
It's like even at this stage, even though I've been out for like three years and I've know for eight years, it's still like 'oh shit, who's going to say what' it's just like 'oh no' but no other than that and actually when I was younger I had a lot of hassle on the streets when I was dating um coz she cut her hair at one point so we both had short hair so it was made really obvious that we were both girls kind of thing.

'Coz I think before people used to think she was a girl and I was a boy like from far away but then we used get shouted at and running down the street and what not, but lately I haven't had any hassle and if anyone said anything to me now I'd just brush it off.

I think the worse thing is when obviously someone kind of attacks you like verbally or physically or whatever like whilst you're with your partner, 'coz in that sense it's just like you've got to protect them but you also don't want to make it any more dangerous kind of thing, coz my first instinct would be to tell them to piss off basically but obviously you don't want to instigate it any further.

Have you had any experience of being hassled or attacked?

Yeah, coz I, just like men, like huge groups of men like down the streets or whatever, saying 'wa hey dykes, come and suck my cock' and I'm just like, that makes no sense, you've just, obviously you've managed to pick up that I'm gay so why on earth would I come and you know. So anyway that was quite funny and yeah just generally just people down the streets.

Do you think that lesbians maybe have more hassle than gay men?

I think it's a different kind of hassle. I have this argument with my gay male friends all the time because it's like gay males get hassle in the sense that people generally have a huge dislike for them kind of thing, especially men, women aren't so bad with gay men but obviously men will more than likely physically abuse them kind of thing, they'll hit them or they'll like proper have a go at them.

Whereas I think the main thing that women obviously face is just generally being ignored or being seen as a male sexual fantasy kind of thing and saying 'oh can we join in', like not being seen as like your sexual orientation is like a valid choice kind of thing or a valid way to live and I think.

Says she 'has a go' at her female friends who put themselves at risk of STIs.

Says she 'has a go' at her female friends who put themselves at risk of STIs.

What do I think about one night stands? I think fair enough kind of thing, it's not something that I would do sober, it's not something that I could imagine myself like actually intending to go out and pull someone in the sense of having sex with them coz I never think like that anyway. I'm just like if you're going to pull someone I'd get off with them or whatever but not like the whole hog kind of thing but I think with lesbians it's different because obviously...

I always have a go at my straight friends for having one night stands and not using protection kind of thing, like very recently like a friend of mine, a couple of friends of mine have gone through like pregnancy scares and what not, and they've been really scared about pregnancy and yet obviously that's been drummed into them.

And I'm just like 'how can you be like so concerned about pregnancy and you're not worried about like diseases that can kill you' you know what I'm saying, like a baby, whether or if you are pregnant it can be got rid of as, whether you believe in that or not there, you know, there is something that exists that can solve that problem but if you catch something like AIDs or HIV or I don't know, I don't really know that many kinds of thing.

But if you get that which can come from a one night stand, that you possibly wouldn't even remember due to alcohol - is it really worth it, like it doesn't take that much to put a condom on does it really.

Thinks that the main setback for lesbian couples is not to be able to have children as...

Thinks that the main setback for lesbian couples is not to be able to have children as...

Yeah, that's one of the most bitching things about being gay that is, that is probably. 'Coz I've always known that I've wanted kids always, I've always wanted kids and actually I want three but I want to actually have them as well, like I want, at least one of them anyway and it's really like harsh to think that anybody... You know what I'm saying, in a one night stand, someone could get pregnant and be like 'oh no darn it' and I'm just like going to be my whole life where I wish like, you know what I'm saying, I really love this person, why can't we be able to have kids

And at what age would you like to have kids?

I suppose by the time I'm like I don't know about twenty seven, coz like we always ask each other now, 'oh if you got pregnant now, would you keep it', like just by some miracle and I would say yeah coz you'd never get the chance again would you kind of thing.

Describes how each member of her family reacted to her news of being gay.

Describes how each member of her family reacted to her news of being gay.

View topic summary
SHOW TEXT VERSION
EMBED CODE
PRINT TRANSCRIPT
I thought, well I'll just tell my parents because they knew anyway kind of thing, because I was always a bit of a tomboy and I came across as kind of you know, I would say more of a kind of, playing football dah, dah, dah.

So I just said... as I came down the stairs and like on my way down stairs I saw my dad, like my step-dad or whatever you want to say, and I was just like 'oh, by the way you know I'm gay don't you' and he was like 'yeah I knew since you was like seven' and I was like 'oh fair enough' and then, so basically I went like from the top stairs of the house downstairs and just told everyone that I passed on my way and like my big brother had already caught me and my girlfriend like kissing so he basically knew.

I saw my sister in my room so I just went 'I'm dating [girlfriend]' and she was like 'really' she was so shocked yeah, and this girl shared a bedroom with me yeah for like a whole year and she didn't know anything was going on between me and her and it was quite funny, and then finally I went downstairs and my mum was like on the exercise bike and I was like 'mum, you know I'm seeing [girlfriend], don't you' and she was just like 'yeah',  she wasn't like, she didn't take it the way I thought she would actually, because obviously she knew already as well because she's like a social worker or whatever so like it was kind of bait anyway.

But she went upstairs and she got all these like legislation forms of what gay's can and can't do and all like the discrimination that's allowed towards them and I was just like 'oh', like reading through all these things and I was just like 'oh that's nice isn't it really' you know what I'm saying, just told you and you're going to tell me all the bad things about it and there's nothing I can really do about it. But she was like supportive but also I guess she just wanted me to know the bad things but then yeah, she didn't take it as I thought she would kind of thing.

How did you really think she was going to take it?

I don't know, I just thought she would probably be more like my dad, just say 'I already knew' kind of thing so but then like the day after I told her, but then actually they, we went out to dinner anyway kind of thing, because we were going to go out anyway and they kind of was like 'oh let's have a coming out dinner' kind of thing, because we were going out anyway so it didn't really matter and my girlfriend came along as well so that was like quite funny.

Explains that she finds periods a burden but that as a lesbian woman her partner knows what she...

Explains that she finds periods a burden but that as a lesbian woman her partner knows what she...

View topic summary
SHOW TEXT VERSION
EMBED CODE
PRINT TRANSCRIPT
I was so excited when I first like, the first day I got my period I was like 'wahoo, mum I've got my period' and the next day I was crying, I was bawling my eyes out I was, 'oh no', coz I was like really sporty and I didn't realise that it entailed so much pain and misery so when I did realise that, I was just like 'shit, it's kind of burden'.

But I suppose being gay or whatever, you both get periods and it's quite good in a sense that you understand what the other person is going through and a lot of the time you do kind of coincide which is handy shall we say '

' I'm still at the point if men had periods they would find a way to fix it yeah!
Previous Page
Next Page