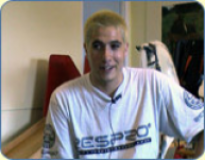 Age at interview: 19
Brief Outline: Thinks that relationships often start from a one night stand.
Background: Anglo-Spanish young man who has recently moved to the UK. He currently works in a factory and lives in a small town. He says that he has a very good relationship with her mother.

Explains that his main reason for using condoms is not to leave the girl pregnant.

Explains that his main reason for using condoms is not to leave the girl pregnant.

View topic summary
SHOW TEXT VERSION
EMBED CODE
PRINT TRANSCRIPT
Mainly, well, I don't know, I mean, if a girls at a point she will want to have sex just as much as me kind of thing. And well, mainly men really as well, 'cos it's mainly the men that never think about that, they just you know, men just go for it no matter what. But I think yeah, really just should be both of us that should think about it.

So when you use condoms, why do you use them?  What is your main reason for using them?

Well my reason is you can't control, you might leave her pregnant you know, that is the main reason.

As well as for other reasons, like catching something, whatever, but mainly for not leaving girls pregnant.

Explains why he wants to have a child when he is older and is more financially stable.

Explains why he wants to have a child when he is older and is more financially stable.

I do want children, I will be the happiest person in the world when I do have them, but not this way, not accidentally. I haven't got a very stable job, not much money and too young for it still.

And if I do have a boy one day, it will be when I've got a stable job, you know, I'm sharing a house with my partner and I know I can raise this child up.

What are your views about that, of young fathers?

It just, just doesn't seem right, 'cos you do see, well you never know, but you know that the young child ain't gonna be raised the proper way. A child needs too much looking after; love, care, and you know. The way I look at it is like anything that I've never had, I'd like my child to have; I'd like to give him everything at once, and everything in that way.

View topic summary
SHOW TEXT VERSION
EMBED CODE
PRINT TRANSCRIPT
Oh well, you know, it's just, this person fancies you, you fancy that person, and you know it's just, you just feel the need kind of thing. You know there's something between you 'burning', and it just needs to be done really, that's all I think about it.

It could always turn into something else, but you know, you just never know.

Well one night stands are worse, do you know what I mean, it's just like you just, you just never know, 'cos I mean I've had partners, I mean it's always been like one night stand first and then from there you always just go on and see what happens. Probably just sometimes then they're just like friends, like partners or whatever, and that kind of thing, yeah.

Says that his main motivation for having a check up was to set his mind at rest.

Says that his main motivation for having a check up was to set his mind at rest.

View topic summary
SHOW TEXT VERSION
EMBED CODE
PRINT TRANSCRIPT
Can you tell me, you have come for tests, you had your tests done?

And they were all clear?

And you were tested for everything?

Yeah. Well I've only, yeah I was tested for everything, but I'm waiting for the HIV results.  It was offered so I just took it.

OK, but I mean what was your main motivation to come and be tested?

Well my motivation was like I came to England only ten months ago and since I've been in England I have had quite a bit of sex with different women. And I didn't think I had anything, but it's just for a peace of mind, just to feel more relaxed about it, and just to get a test done.

And on those occasions have you used protection or not?

Yeah, only like just, as I say just maybe once or twice I haven't there hasn't been any with us and you just feel comfortable in that situation so you just go for it.
Previous Page
Next Page