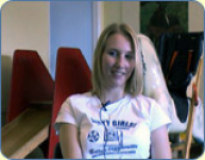 Age at interview: 18
Brief Outline: Regarding one night stands, she thinks that they are fine as long as you're careful, single and insist on a condom.
Background: Secondary school student preparing for her A levels. She says that she became more aware of sexually transmitted infections after a friend of hers got Chlamydia.

Talks of how little information and education teenagers have around the time they start having sex.

Talks of how little information and education teenagers have around the time they start having sex.

View topic summary
SHOW TEXT VERSION
EMBED CODE
PRINT TRANSCRIPT
I don't think we really discussed it seriously because like you said we were both so young, I mean he said that, but most blokes say that, 'but oh I'd stand by you if anything was wrong' but I don't think we really really discussed what we'd do if anything like that happened - we just didn't think it would, so a bit na've.

Do you think you have had sufficient information about sexual health in general for instance about safe sex, prevention of unwanted pregnancies, sexually transmitted infections.

Again not at a young age, not when it's really crucial, around fifteen, sixteen, when people start to have sex quite a lot, there wasn't much information about condoms, how to use them and things like that and about, especially about STD's they weren't really brought up at all at school so, we didn't really know about them, like you wouldn't have been told that Chlamydia makes women infertile and things like that, you wouldn't really know the real dangers of them.

Thinks one night stands are fine as long as you're careful, single and protect yourself.

Thinks one night stands are fine as long as you're careful, single and protect yourself.

What are your views on one night stands?

I'm not really sure, I don't think there's anything wrong with them as long you are sensible and careful, you know who you're going home with, and you use protection.

I mean if you have them regularly and you're not using condoms and there is a risk that you could be transmitting sexual diseases and things, or that you're being unfaithful to a partner by doing it, then I think it's wrong, but otherwise if both of you are consenting and you're using protection I think it's okay.

Have you had any experience of it?

Okay and did you use protection on that occasion?

Yes, we did we used condoms.


There are different attitudes towards men and women who have casual sex.

There are different attitudes towards men and women who have casual sex.

View topic summary
SHOW TEXT VERSION
EMBED CODE
PRINT TRANSCRIPT
Do you think that men and women have different attitudes when it comes to casual sex?

I'm not really sure, I think there's probably more women who think it's not okay to do and that you shouldn't do it, but not that many at my age I think, but I think men congratulate each other if they've done it.

it's like wow you pulled her and they congratulate each other, there's probably more peer pressure on them to have causal sex as well as there is on girls, girls aren't really that bothered about it.

And girls are sort of less likely to boast about it and talk about it?

I think girls would probably say 'oh I went home with this bloke, blah, blah, blah' but they'd probably be more talking about it as if he was really nice, I'd like to get to know him better, whereas a boy would just boast about that night, what the sex was like that night and things like that.

Describes her experience as a teenager when she asked her GP for emergency contraception.

Describes her experience as a teenager when she asked her GP for emergency contraception.

He was quiet, not very comforting, he was quite strict about it and said 'this isn't a method of contraception' blah, blah, blah. He was quite, he made me feel quite bad about myself actually compared to my friend who went to the family planning clinic and they were reassuring to her and kind of helped her more and gave her free condoms and things like that, so I felt that he wasn't very helpful, wasn't very considerate.

He gave you a lecture?

When you went to get the emergency contraceptive from your GP and he told you that it was not another method on contraception, what else did he say to you, can you remember?

I don't know, it was a long time ago so, it was a very young age to be having sex and um you should be using condoms and just things like that, I can't really remember much more than that.

Explains that the experience of a friend of hers that contracted Chlamydia prompted her to go and...

Explains that the experience of a friend of hers that contracted Chlamydia prompted her to go and...

View topic summary
SHOW TEXT VERSION
EMBED CODE
PRINT TRANSCRIPT
Can you tell me what prompted you to decide to be tested?

One of my friends caught Chlamydia from her boyfriend who had slept with someone else behind her back and she didn't realise she had it until quite late on and I suppose that prompted me and a couple of my friends who've had a few sexual partners, to go and be tested and things even though they didn't really think there was a risk.

Just come and be tested to make sure, because Chlamydia can make you infertile and we hadn't thought about it before until she had said and we'd seen how upset she was and things like that, so I suppose her experience prompted us to do it.

So do you feel at risk or not at risk of a STI?

Because I've been tested and because I know that if I had a new sexual partner I would use a condom and things like that.

If I thought that there was any risk, if I knew that they'd been with someone else and they had had unprotected sex then yeah, definitely I would say that I wanted them to be tested and I'd probably withhold from sex until they were really.

Explains that she was the first from her group of friends to start her periods and discusses her...

Explains that she was the first from her group of friends to start her periods and discusses her...

A bit nervous because I started quite early and before most of my friends had so I felt yeah, so just nervous and a bit embarrassed so...

Just because of having to go and change tampons and things like that, that no one else was doing it and you just feel a bit self conscious.

Yeah at school and things.

Did you tell your friends or the teacher?

I think I told my close friends, yeah probably my two closest friends but no one else.
Previous Page
Next Page