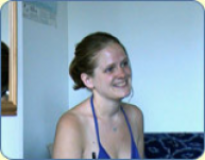 Age at interview: 22
Brief Outline: Says that in Scandinavia using a condom when you are a teenager is seen as something 'normal'.
Background: Lives with her husband and their eight-month-old baby. After finding out she was pregnant she decided to start her university studies and says that her husband has been very supportive.

I had quite a lot of male friends and that was okay with them but the women didn't like me because of it. I don't know if they felt jealous or what, I don't know, and yeah it was not really the done thing. If I had of been male it would have been okay, yeah I think so definitely.

Explains that for her, the use of condoms is not an issue but something natural.

Explains that for her, the use of condoms is not an issue but something natural.

View topic summary
SHOW TEXT VERSION
EMBED CODE
PRINT TRANSCRIPT
We did use contraception, we used condoms because I think in Denmark that's something that is you know, people do, it's, there's no question about it you know men and women.

Yeah, well from where I was anyway, you know from when I was fourteen, fifteen, there was no question, that is what you did, you know you used contraception if you were going to have sex and that's it you know.

Who gives you that information.

They have people coming round the school actually. I remember when I was thirteen, fourteen they had people coming round the school and giving talks and handing out condoms and you know, really giving you lots of information and they were quite open and quite, yeah, quite willing to talk about it, more so than here I think, so I don't really remember it as being much of an issue it was just something there was.

For you it was natural that from the moment you started your sexual life, you were going to use condoms. And the boys do?

So they have no problem using condoms in Denmark?

Thinks that honesty between partners is more important than faithfulness per se.

Thinks that honesty between partners is more important than faithfulness per se.

View topic summary
SHOW TEXT VERSION
EMBED CODE
PRINT TRANSCRIPT
In the context of a serious or long-term relationship, how important is faithfulness?

That depends on the relationship. What I said to my husband when I met him, I said, 'If you were ever in a position where you need to go out and, or you feel you, you feel you want to be unfaithful and, you know, the sex isn't great between us or, you know, something happens, tell me'.

Indicates that despite falling pregnant with the IUD, she still thinks that it is the best method...

Indicates that despite falling pregnant with the IUD, she still thinks that it is the best method...

View topic summary
SHOW TEXT VERSION
EMBED CODE
PRINT TRANSCRIPT
The coil is the only other method that I've used, I think. I tried the pill actually. This was when I was with my husband we had some problems with the condoms, yeah. So we decided to look at alternative methods 'cos, we just, it didn't seem to work for, you know, we had them coming off and busting all over the place.

So we decided to go, I decided to try the pill and I took it for two months and I did not like it at all. It just made me feel really bloated and really uncomfortable. I didn't like it.

It's the, on the [road]. Yeah. So we discussed the coil then because we were looking at longer term. You know, it was the first time I was really thinking about longer term and that was supposed to be 5 years and, you know, it was, you insert it, a bit of discomfort and I thought, 'Well I can deal with that. If it's going to sort if out for 5 years that sounds like a good option'.  And I'd had it inserted in November and we found out I was pregnant in March.

So we're not sure what happened there. It looks like it came out 'cos I couldn't see it on the scans.

And apparently that's a very rare. I'm a 2% statistic.

I think I would like a coil again 'cos it really is the ideal form for, you know, of contraception for me if it would work. I don' t like the idea of taking hormones, I think that's, I just don't like, you know, and also taking pills every day, I'm not very good at remembering things like that. And it's quite inconvenient.

Just the idea of taking hormones that I don't need to take. You know, that are messing with my body's, yeah, equilibrium and my body's own natural functions. I don't like the idea of it.

So at the moment you use '?

At the moment we're using condoms, yeah. And we're, we were looking at getting another coil fitted because after having a baby apparently it's supposed to be a lot, lot better.

Describes her partner's reaction to the news of her pregnancy.

Describes her partner's reaction to the news of her pregnancy.

View topic summary
SHOW TEXT VERSION
EMBED CODE
PRINT TRANSCRIPT
When we found, we went into the Family Planning Clinic actually and we did a pregnancy test and my husband was with me, well my then fianc'e, and he was delighted because he wanted to have kids and he was so happy and I went oh.

But he was really really happy and I always... I don't know, from the moment I saw him I knew that he would be a great father, and I think that's one of the things that attracted me to him because I was like kind of at a stage in my life where I wanted somebody who was going to be a bit reliable and you know, a steady partner.

And it was okay you know, it wasn't exactly what I'd planned but it was okay, you know I wasn't seventeen, I was twenty-one, so I wasn't that young and yeah, so it was more a question of okay, how am I going to sort out Uni and everything else, and the place I live and this and that.

And it was you know that, those were the questions that came to mind so I had a list of all the things and started ticking them off and making phone calls and you know, we got on with it.
Previous Page
Next Page