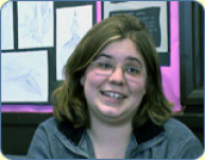 Age at interview: 18
Brief Outline: Thinks that teenage girls living in rural areas experience many difficulties when trying to obtain emergency contraception.
Background: A level student who lives in a rural area. She says that in her area there is 'nothing' geared for young people regarding sexual health and family planning services.

Suggests ways in which services for sexual health and contraception can be improved in her town.

Show in context
SHOW TEXT VERSION
PRINT TRANSCRIPT
In this area I think that they could do with opening up a clinic that is actually open when kids can get there, rather than in the day when they're meant to be at school, because if you skive a day off school, especially if you're not in the sixth form, in the sixth form it is easier to miss a day off school, but lower down the school like up to sixteen, if you miss a day then they contact your parents and then you've got to explain to your parents why you missed a day off school which a lot of kids don't want to do, if they've had to go to a Family Planning Clinic.

So it would be better if they could like maybe go down on their way home from school or something like that. Also my doctor is actually really good, but a lot of the doctors around here aren't very good with teenagers, with people of my age. They seem to be quite judgemental, which a lot of teenagers are scared to go to them and one doctor that I know of, I'm not sure exactly what the circumstances were but one of my friends went for a confidential kind of thing about something to do with sexual health.

I think she'd had a pregnancy scare or something like that and the doctor actually told her mum, when her mum went to see the doctor he kind of dropped her in it and said 'oh how's your daughter' and her mum was like 'I don't know what you're talking about' and so he explained it to her, so obviously that, but apart from that being illegal, that, a lot of people were scared to go to doctors in case that kind of thing happened to them.

So maybe some more friendly doctors or female nurses that would actually take the time out because the female nurses that we've got round here they do the blood test and the minor ops and that but they don't actually sit down and talk to teenagers and we've got the school nurse which is quite good, we've got 'Pop-in-Here' which is meant to be good, I've never been so I don't know, but that's meant to be quite good.

In general around this town, people are scared to go to the doctors and they can't get to a clinic so the only option they've got is to listen to their friends, and their friends aren't always as clued up as they pretend to be.

Describes the difficulties experienced by teenage girls living in rural areas when trying to...

Show in context
SHOW TEXT VERSION
PRINT TRANSCRIPT
Most girls I know would go to the chemist, because if you go to the doctors you can get it free can't you, but a lot of the girls round here are quite scared to go and see their doctors so they'll go to the chemist, but when you go to the chemist, like the chemist that we'll get it from would be Boots and the ladies in there aren't the most friendly of people, so they'll shout it out and then you have to be taken into the back room to talk to the Pharmacist, I think, I don't really know who she is, and the way she talks to you makes you feel dirty basically.

She's really nasty about it, she's like 'oh haven't you ever heard of contraception blah blah blah', and literally has a go at you for it and if you're already worried and a bit upset, and you're having to fork out '20.00 as well which is going to annoy people, you could really do without someone narming in your ear about how irresponsible and childish you are kind of thing, really I think.

Compares her inadequate sex education with the A Pause peer education project she works on.

Show in context
SHOW TEXT VERSION
PRINT TRANSCRIPT
When I was in Year 9, we had Sex Ed and the closest we got to a talk about contraception was that they passed around a pack of condoms, in the box, still in the wrappers, that they'd obviously had in there for years, with all the spermicide leaking out and they said 'don't open them because we've got to use them next year, this is what the outside of a condom packet looks like' and that is literally what they did, and we had to pass it round, going 'yeah, great, we all know what a condom looks like but...' and that's as close as it got to telling us about contraception, literally, it was an absolute joke and that's why we campaigned to get A Pause up here.

I think that A Pause is one of the best things that they've brought in at this school, it was me and my best friend that campaigned to get it brought in here, but we're not allowed to talk to the students about contraception in A Pause because by talking about contraception we're promoting sex to them apparently, but I do psychology and in phycology we learn about different ways to promote things and there should be different stages like, don't have sex, fair enough, should be the first stage but then I think that they should bring in the second stage which is, if you're going to have sex, use contraception.

Because rather than just saying 'don't have sex' to a group of fourteen/fifteen year olds, who are probably out having sex anyway, a lot of them, it just seems stupid to do that and then to turn round and go 'oh my god we've got so many pregnancies, how did it happen?' as if they're surprised by it.

But if you're gay anyway then why should promoting homosexuality, it's not promoting it, it's just educating them and it's things like that, like a lot of, I've got quite a few gay friends who are boys, I haven't got any gay female friends, and they don't know enough about the risks involved in homosexual relationships and I think that the school or someone should provide information about that and they should definitely tell the kids about contraception.

So the sex education is not the best. You have been involved with A Pause for the last couple of years, and you're allowed... which age group are you allowed to talk to?

Year 9. I think that's, I think it's thirteen and fourteen year olds, I think is Year 9 and they have, each class has six sessions, three session with the teacher and health professionals and three sessions with sixth formers. According to our trainer we were allowed to request that the teachers' weren't present but so far the teacher has been present in all of them and basically they have three or four sixth formers standing at the front of the class and we do, we teach them about relationships and kind of the emotional side of sex and how to say no, kind of thing.

But we are not allowed to tell them, we don't have to tell them any of the kind of biology part - that's all done before we get to them and we're not allowed to talk about contraception really and then obviously there is all this stuff in the media, that we're promoting oral sex and that, so we have to be very careful about that as well now.

In her experience boys don't know nearly enough about contraception.

Show in context
HIDE TEXT
PRINT TRANSCRIPT
99% of blokes that I know think that withdrawal is an efficient, an effective method of contraception for example.

And that is the majority of boys that I know, and these are intelligent boys, they're doing 'A' levels or they're doing good jobs and they think that that is a 100% effective, so I don't think that they get taught enough, or if they are getting taught, they're being taught the wrong things because it's not effective.

She had been using the pill for 4 years for medical reasons before she found out that she should...

Who told you at that point?

That was the doctor because I went in for some antibiotics and he said something about 'you're using a condom for sex aren't you', and I said what are you on about kind of thing and he said 'oh you do know that the Pill doesn't work when these things happen don't you' and I thought well that would have been nice to have known four years ago possibly, but, that kind of thing, they just expect you to know but if no one's taught you, you don't know these things, kind of thing.