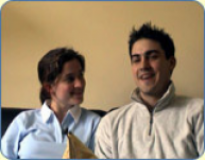 Brief Outline: His partner is a young teacher who indicates she has no problem in approaching her GP or other doctors in the surgery to discuss issues regarding contraception or sexual health. She has only used oral contraceptives.
Background: A couple - An Australian student who says that he learned a lot about sexual health from reading his older sister's magazines. He cannot understand how guys with no sisters cope or where they get their information from.

A couple discuss the double standards about casual sex.

A couple discuss the double standards about casual sex.

View topic summary
SHOW TEXT VERSION
EMBED CODE
PRINT TRANSCRIPT
G' Not had a whole heap of experience with one night stands. I think I'd prefer to be in a relationship.

B' Yeah, I guess I haven't had a great deal of one night stands and they're not terribly fulfilling and there's always that worry about where has she been, and who's she's been with and so there's, there's anxiety on that front. It's better to be with someone I think.

G' Yeah. And they're usually also connected with alcohol and stuff, so you usually can't really remember. That's also a bit stressful.

Do you think that men and women have different attitudes when it comes to casual sex?

B' I don't know whether it's just men and women or just society but I've always, it's always seemed to me that a man who's with a lot of women is a, he's a stud or you know he's... it's something to be proud of. But a woman who's considered a slut, you know if she's with a lot of men. So, there's a bit of '

G' At the same time a man does keep a, it seems more of my female friends have a lot more casual sex than my male friends who tend to prefer to want to be in a relationship.

G' Yeah. I don't know if my friends are just different!

A couple talk about their first sexual experiences regarding the feelings and pressures involved.

A couple talk about their first sexual experiences regarding the feelings and pressures involved.

View topic summary
SHOW TEXT VERSION
EMBED CODE
PRINT TRANSCRIPT
G' Quite, yeah, very comfortable and confident because it was in a relationship with someone I had known for a very long time. Before that we had been very close friends for a number of years before that. So it was very easy and we talked about it before and it was something that we both wanted to do so I didn't feel any pressure or stressed about it.

B' I was a bit apprehensive, I'd been with girls before but not in that situation or not to that extent I guess. And yeah I was, I was nervous.

Do you think there are sort of extra pressures on boys with regard to sex?

B' I don't know about extra pressures. I guess there's like performance anxiety but I don't know, I think all boys are the same anyway so it's... there's no real magician in bed at 15 or 16 so I don't know. I don't think it really matters. But when you look back at it, yeah I think there was a bit of pressure to, I don't know, make a good impression.

What is the role of the peer group on that pressure?

B' Well it's like everybody's doing it, you know. You... this was what, 7 years ago? So, all young kids were doing it at that time and there's, you know, privy, it was like joining a club I guess. And once you're a part of that club I don't know, it doesn't really change anything but, you know, it just seems that the pressure is off a bit and'

What do you think about it, the idea that sort of boys have to do sex well and do you think there is that expectation?

And for you, what are the pressures from the girls' side?

G' I don't know... When, I didn't really feel any pressure. I mean, my, when I started having sex it was something that was just very private between me and my boyfriend at the time and really didn't discuss it with any of my friends or any of our peer group.  Most of my friends at that time were also in relationships, so it was something that was very privately going on just within the relationship. So I don't think I felt any pressure really.

He says that he read his older sisters teen magazines for sexual health information.

He says that he read his older sisters teen magazines for sexual health information.

B' It's a good question. I tend to think of myself as educated but I have a sister and I used to always take an interest in what she was reading in her magazines so I kind of found out a lot of information that way. But as for men in boys' magazines and things, you don't really see any information on contraception, I don't know. But I haven't bought a magazine for a long time so '

G' You just read your sister's!

So how old were you when you started reading your sister's magazine?

B' Well I guess when she became a teenager, when she started buying magazines like Cosmo and all those girly magazines. Teenage girl magazines, so I was only 9 or 10 or so.

Explains that she has no problem in talking to a male or female GP about contraceptive matters.

Explains that she has no problem in talking to a male or female GP about contraceptive matters.

So your GP's a female?

And you have a good relationship?

So do you think that is one of the reasons why you go there?

G' Yeah. That's one reason, but I have also when she's not been there, I have seen other doctors in the practice who are male and I don't really have a problem talking to them about it either. I think I just phone my GP first because it's seems the easiest thing for me to do, It's quite near here.

Thought she might need to take emergency contraception abroad.

Thought she might need to take emergency contraception abroad.

View topic summary
SHOW TEXT VERSION
EMBED CODE
PRINT TRANSCRIPT
G' OK, we did have a little problem in China, condoms broke and we needed, I thought I needed to get the morning after pill and 'cos, I was on antibiotics at the time so I wasn't sure whether the pill worked. So that involved sort of waking my mother up at 6 in the morning or something saying, 'Ahh, you have to help me'. And she talked to the doctor who then, everything was done via my mum. My mum phoned the doctor, the doctor said maybe I didn't really need it.

Your mum in the UK?

So, what happened? She had to send you, there was not...

G' No. In the end, because I was on the pill but I was on antibiotics I thought it would reduce the effectiveness of the pill, but the doctor said almost certain that I should be all right so I just had to wait for two weeks and see. But the doctor didn't think it was that big so I phoned my mum, she phoned the doctor, my mum phoned me back. So I did it that way. If I had really needed it I could have gone through my organisation to get it.