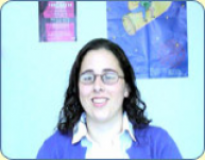 Age at interview: 22
Brief Outline: She has tried different brands of oral contraceptives.
Background: Student who lives in shared accommodation. Says that she was brought up in a rural area where there was not much to do for young people except to have sex and make babies.

Thinks that casual sex has no emotional level.

Thinks that casual sex has no emotional level.

View topic summary
SHOW TEXT VERSION
PRINT TRANSCRIPT
I think casual sex has no emotional level. It's just animalistic humping. Whereas in a long-term relationship, sex is better because there is an emotional level, because you've got the emotional input, and you stare into each other's eyes and think, 'I'm having sex with him because I'm enjoying it, and because I want to, and because he knows how to do it for me, and we're in love', and you can feel the connection by looking in each other's eyes.

Whereas having sex with a bloke you hardly know, on a one-night stand, you're not likely to have eye contact, because there's no emotional level to it, and then you wake up in the morning just feeling ' eeeeer.

Thinks most teenage mothers are silly, but knows one young mother who is married and seems very...

Thinks most teenage mothers are silly, but knows one young mother who is married and seems very...

View topic summary
HIDE TEXT
PRINT TRANSCRIPT
One of my friends had two before we'd left sixth form ' and there were, I think there were three girls having babies when we did our GCSEs, because, I mean, I lived ' I think partly because of the area where I lived, there was nothing else to do but have sex, and a lot of them '

I think several of them just had babies to get houses and to get out of school, and a lot more since I left school, have had babies, and I just couldn't imagine it. But then they couldn't imagine going to university and, to them, having babies was what they wanted to do, so '

I think they were silly. One of the girls, she didn't even get GCSEs, because she left to have her baby. You know, she's just like, what can you offer a baby if you've got no education?  You know?  You're going to be ' you're going to end up working all hours god sends, in a supermarket stacking shelves. And, to me, that just seems like ' you might ' you could give it all the love in the world, but a baby can't live on love alone.

You know, you've gotta ' and one of the girls who had a baby, her mum ended up ' not adopting it, but looking after it, so the baby thought she was her sister anyway. And you think, 'Well, that's ridiculous.  Why did you bother having it?' you know, 'if you obviously didn't want it that much'. But then another one, she had a baby, and she's since married the father, and they're living very happily, and he's got a job and he ' because he's got some sort of education, and they're very happy, so I think it depends on the situation.

Thinks that for men casual sex is easier.

Thinks that for men casual sex is easier.

View topic summary
SHOW TEXT VERSION
PRINT TRANSCRIPT
I think, to men it's easy. Men always get off and enjoy it, no matter what, because, at the end of the day, it's not hard for men to have orgasms. Whereas women, if you have ' you know, you need to ' you know, a bloke needs to practice and learn how to do it for you.

So if you only sleep with him once, he's not going to do it for you, so ' obviously, if you're going to have sex in a long-term relationship, then it gets better over time, and ' because he gets to know what he's doing more, and you get to know each other and because... actually, it was one of the things my boyfriend said, was ' I was like, you know, 'Are your all orgasms the same?'  And he was like, 'No, of course they're not'.

You know, 'being with a woman who learns how to ' how to touch you, and how to hold you, they get better'.  So, obviously, if you're in a long-time relationship, they're going to get better up to a point, and then, obviously, as it tails off, the relationship tails off anyway, so '

Describes how her first sexual partner became a good friend.

Describes how her first sexual partner became a good friend.

View topic summary
SHOW TEXT VERSION
PRINT TRANSCRIPT
I think, in a way, I'm glad I did it, because ' it's like I've got two big firsts out of the way in one go, and because we were sensible enough to use a condom, we didn't really have to worry that much about pregnancy, really. And we were both virgins, so we both knew we didn't have anything to pass on to each other.

So I wasn't ' I don't ' I don't really regret it, because we did become very good friends after that, and we still keep in touch, even though I haven't seen him for a couple of years since we've been to university.

We still know that if I needed him ' it's like he broke down on the motorway and rang me, I was the first person he rang, even though I hadn't seen him for like six months, he still rang me, so I know he's still there for me. So I don't regret it in that way, because I've got a very good friend now.

And I think ' in a way, I wish I had held out and had, you know, like a beautiful first time, but I think that's just all rubbish, I don't think that really happens, I think everybody's first time's a bit crap, because everything you do for the first time you're really crap at, it takes practice, so ' I don't really regret it, no.

Talks about the different oral contraceptives she has tried.

Talks about the different oral contraceptives she has tried.

View topic summary
SHOW TEXT VERSION
PRINT TRANSCRIPT
I was offered ' I was talking to the nurse, I've had ' with the Pill I go on, and it'll cure up my PMS for a while, and then I found that after, like, sort of a few months, if I'm not on the right one, it'll come back again. So I went to see ' when I first went on them, I changed it quite a few times.

How old were you when you started?

Can you remember the name of the Pill?

Yeah, I started on the Microgynon ED , because it was the first one I went on, and it was what the doctors started everybody on at my surgery, because it's the one with the 21 active, and the seven inactive pills, so that you get used to taking it every day. And then, erm, because I had quite bad acne, I went on to Dianette, which is for the ' obviously, for that.

And that didn't agree with me. So then I went on to Cilest , which I stuck with for a while, but then my symptoms came back, so they tried me on ' Trinordiol, which is a triphasic one, and I've just recently changed to Brevinor, but I really don't like that, and I'm going to try and get back on the Trinordiol.

Because I've got such problems with my breasts, I've got to the stage I can hardly bear my boyfriend to touch them, and even walking up and down stairs, it hurts. So I'm going to go back to the doctor and say, 'I don't get on with this one'.

I don't mind taking a pill every day, I just want something that's ' a different one.  So we're going through the ' it was really funny, I was going through the BNF with the doctor, trying to find one in the glossary that I hadn't tried. He's like, 'You've been on everything!' .

So your breasts are very sensitive '?

Yeah, and they're really tender and swollen and ' and hurt when I walk, and when people touch them. And because of the job I do as well, I work in a bowling alley, so obviously there's always a lot of people about, and you've got to ' like, lots of lifting when you're carrying glasses and stuff, and it's like I can't do my job properly, because my breasts hurt, which seems really silly.

So when did this start to '?

About a month ago, which is why I'm fairly certain it's the new Pill, because I've only been on it for two months.

And you haven't had this problem before?

No. I never had a problem with my breasts before, so that's why I'm fairly certain it's the new Pill, so I'm going to go back and get it changed.

Would have an abortion if she got pregnant now. If she had a baby she would have to give up too...

Would have an abortion if she got pregnant now. If she had a baby she would have to give up too...

View topic summary
SHOW TEXT VERSION
PRINT TRANSCRIPT
If I got pregnant now I ' wouldn't have it. I'd either have an abortion, or I'd put it up for adoption. I know now I can barely look after myself, financially, and just in general, and I couldn't cope looking after a baby, and I don't want to cope with looking after a baby. I wouldn't want to have one and end up going home and living in my parents' house with a baby, because there's no quality of life, which is what's important to me.

School sex education came too late for many of her fellow sixth formers.

School sex education came too late for many of her fellow sixth formers.

View topic summary
HIDE TEXT
PRINT TRANSCRIPT
Oh no, from my family, from my mum and dad. The sex education we got at school was rubbish, until we got into the sixth form, by which time it was too late for most of us, because most ' you know ' in the sixth form, they were like ... 'here is the Family Planning nurse'.

Describes how depressed she felt around the time of her period.

Describes how depressed she felt around the time of her period.

View topic summary
SHOW TEXT VERSION
PRINT TRANSCRIPT
I never had too much trouble with period pains, it was the mood swings I had problems with. I got ' used to get very very depressed, and almost suicidal at one stage, with them, they were really bad, and again, that was another reason I went on the Pill, because I just couldn't cope with it.

When did you first start noticing the changes in moods?

I think if you talked to my mum, she'd probably say she'd always noticed them, but I didn't start noticing it myself till I was about 15, 16, when I was going through my GCSEs.

I was under a lot of stress, anyway, with doing my GCSEs, because I've got very bright brothers that I was trying to live up to, and I was expected to do well, and I think I was just under a lot of pressure all round, and they just got really bad, and it got to the point where I just thought, you know, 'I shouldn't have to be like this'.
Previous Page
Next Page