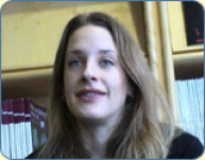 Age at interview: 20
Brief Outline: Was treated for Chlamydia with a course of antibiotics. (Played by an actor)
Background: Student who experienced Chlamydia the first time she slept with her first boyfriend. He did not know he was carrying the infection. Both were successfully treated. (Played by an actor)

Explains why she preferred to be tested by her GP than go to the GUM clinic. (Actor)

There is a sexual health clinic that you can go to, where you can get your tests the same day, but I really didn't feel comfortable going there. Lots of people sort of sitting in the waiting room, you know, they know why you're there and everything, it just doesn't feel right, you feel a bit dirty and stuff. So I thought it was better to go to a doctor where I could do it privately and wait for a week for the results, I think that's the best for me and so that's what I did.

Do you still think along the same lines now?

No. I think anyone can get Chlamydia, you don't have to sleep around, you can just sleep with one person and get it and that's it, which I did. But I still think that I wouldn't go to the clinic, I'd rather go to the doctors and do it privately.

Explains that she needed emotional support as well as physical care when experiencing Chlamydia. ...

I recently saw a program about this lady who contracted Chlamyidia and she didn't realise that she had it, when she found out the effects of this Chlamydia, she realised she couldn't have a baby. This to me is really scary, you know because people need to know the effects of what can happen if you have this disease but also that there is treatment for it.

The balance needs to be there for both of them. Emotional support I think is really important for this kind of thing as well, because it's not just an infection, it effects you mentally as well as physically, so people really need some help there.

I wanted someone to tell me that everything was ok, that I wasn't dirty and that, you know, the thoughts that were going on in my head were normal, to sort them out.

I needed to speak to someone to tell them how scared I was, but also just to listen to me and understand and reassure me. I don't think it's always easy for people to go and speak to their family or friends, especially about this kind of thing because it can be embarrassing and a bit of a taboo subject.

Explains how her boyfriend reacted after been told he had given her Chlamydia. (Actor)

My boyfriend or ex-boyfriend, didn't realise he had Chlamydia either, so he was about as shocked as I was when I told him and pretty upset, it kind of ruined our relationship and obviously we're not together anymore.

So who helped you most during that time?

My mum and my best friend really, my boyfriend just wasn't interested in helping me through this or us helping each other. It was really hard at first to talk to my mum about this sort of thing but she was great and did come with me to the doctors and things like that.

My boyfriend's reaction was, he was quite scared, he didn't know anything about it so I just gave him all of the information that I had gathered so far and he took that away with him, went to the doctors, got his treatment and that was it really

How did you feel when you saw your boyfriend?

When I saw him it was really weird, we kind of looked at each other and we just, I don't know, things had changed, we didn't feel the same anymore and we just knew it was over.

So that ruined it really, yes I am worried about this kind of thing happening with my current boyfriend, I think I will definitely be tested periodically, and I mean if the test came up positive for anything.

Indicates that her experience on the pill has been very positive. (Actor)

Are your periods regular or irregular?

When I first started my period they were regular, sort of 28 days on, 7 days off, then when, it was around my GCSE and A level time, it was pretty stressful and my eating habits were pretty poor, so my periods became very irregular, which was not brilliant.

Later on I think when I was 19, they became too regular every sort of 15 to 18 days I'd come on, which was really annoying. Then when I was about 20, they just became really, really painful, so I went to the doctors and decided to go on the pill, which was mainly for contraceptive reasons as well but it did help with the pain.

Which pill are you taking?

Are you quite happy with the pill?

Yeah, very, I wouldn't change it.

Reflects that her friends were more clued up about STIs than she was, but that school sex...

We got a bit of information at school about them, but not a lot really, speaking to my friends after my experience, they seemed to be more concerned about STIs than I was, I obviously knew about them, but just didn't really think a lot of them, you know. With guys that you think are decent and proper and so you just presume they wouldn't have anything and you know, everything would be fine.

Do you feel you have had sufficient information about contraception at the right time for you?

Men and women need to understand more about how each others bodies work. (Actor)

I think as girls, they are also given education at school but they are more about the mechanics of girls rather than the feelings of girls. They sort of have quite a few misconceptions about periods, you know, get your period, lasts a day, go to the toilet, end of story, you know they need a bit more guidance.

I think also, for me, I know how girls work but I wasn't sure on the mechanics of the boys, you know how they feel about things and what they go through puberty and everything, so I think more information for both parties would be better.

I think obviously when you're in a sexual relationship, you learn about each other and each other's bodies and how you know, I might not want sex or I've got my period or something like that. I was quite shocked when my boyfriend told me that he hadn't had sex for 6 months and so things might go quite quickly'

It hadn't occurred to me that things like this would happen, I'm not quite sure if that's just me being naive or whether everyone feels this way.

Explains why she did not tell her mum that her period had started. (Actor)

Quite a lot, I was sort of one of the later people to start my period in my peer group, so I knew what was going to happen and what to do about it, but I was quite frightened of telling my mum, I don't think I told her for about a month.

I think at that age you find it really hard to speak to your mum, at least I did, you know how to approach the subject. So I did talk about it to my friends but not necessarily to my mum.

Now we talk openly about these sort of things and it's brought us a lot closer and it makes it a lot easier to talk to her about things like this, and I think that she felt quite upset when she realised I couldn't talk to her about it and now feels a lot happier about things. I think she felt a bit like, 'I wish I could of told her'.
Previous Page
Next Page