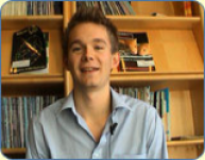 Age at interview: 19
Brief Outline: He and his girlfriend are both students and want to travel and developed their careers. He does not want children until he is in his thirties. (Played by an actor)
Background: He is an undergraduate who lives in shared accommodation. He appreciates to have grown up in a stable family home. (Played by an actor)

Says that he and his girlfriend used effective contraception to avoid the risk of an unwanted...

I mean in terms of a baby, you know, it's the sort of financial burden but also things like time pressure, that sort of thing and just, really just the whole process of my girlfriend having to go through the pregnancy, would just be very disruptive for our life at the moment and for myself as well, I mean obviously I would be supportive if anything did happen but I really wouldn't want to go through that myself at the moment. So I think the two of us are very, very good, sort of, touch wood, at making sure we're well protected.

At this time in my life I'd say it's paramount to avoid the risk of my girlfriend becoming pregnant. I mean I'm not against pregnancy or anything but I just think it needs to be at a time which isn't going to be so disruptive in our lives, both my life and my girlfriend's, I mean, obviously it would affect both of us and the baby as well.

The way things are now we're both students, we're both living in shared accommodation, that sort of thing. So it's important that, it's important I think that we don't do anything now, that would sort of spoil our lives now as they are at the moment, so we do concentrate on sort of avoiding pregnancy and using contraception.

Talks about how he felt the first time he had sex and how guys are concerned with their...

It wasn't something we really rushed in to. It was, I guess on the one hand I was sort of, confident in one sense and a bit apprehensive in the other, just because I think there's quite a lot of pressure and expectation placed on sort of sexual performance and things like that. And obviously it's your first time, and it's a bit I guess, like driving a car or doing anything, you never quite know what's going to happen.

So I was quite anxious but that's part of the excitement as well, so I suppose, I think I was fairly confident, probably as confident as could be expected, given the situation.

I mean I think, certainly amongst guys and I guess probably with girls as well, I think there's a lot of conversation whereby if you do sleep with someone and sort of make it known to people, then the first questions are always sort of, 'How was it, was it good'.

And so I suppose there's that sense that if you do sleep with someone and people find out, are they going to be sort of passing it round amongst friends and sort of wondering were you any good and that sort of thing and so I think there's a sort of emphasis placed on that.

Talks about why he considers his present relationship as important. (Actor)

I think to start with as a teenager, it's very much sort of, 'Oh she's nice, she's a bit of all right', that sort of thing it's very much based around that sort of physical lines. I don't think that goes away as you get into early adulthood. Because I think you know, everyone likes people who are good looking. But I think that you do have the sort of ability and desire to have a relationship on more levels than that.

So I think things like spending time with someone, or having sort of common interests become a bit more important so' You've always got your friends but I think as you grow up into adulthood, you can combine sort of friend with girlfriend a bit better.

Well first of all I'd say that I'm, I'm in a relationship at the moment which is really good with my girlfriend and we're very happy and we support each other. I mean, I'm not saying that my life as a student is particularly stressful'but there are sort of difficult times both in my life and my girlfriends life and I think we are able to help each other in those sort of emotionally, and also just practically in terms of'  It's always useful to be able to share a problem.

So there's that and then I think also there's the, the physical side to the relationship which is obviously good fun and is something which we enjoy and is important in the relationship, and then there's the companionship side, it's nice to have someone who you can talk to about anything and sort of spend time with, without really ever getting annoyed with them.

And again I know you've got your friends but at times it can get just a bit much just with friends. Whereby, I guess its nice just to have someone who you can be with, without really having to make that effort to socialise, I think that's sort of what I'm trying to say.
Previous Page
Next Page