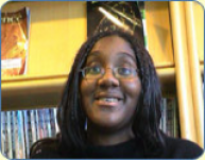 Age at interview: 21
Brief Outline: In her culture the coming of age of a girl is at the time of the first menstruation and it is an occasion that it is celebrated by the whole family. (Played by an actor)
Background: Defines herself as a Black African woman and a full-time mother. She lives with her partner and her fifteen-month-old daughter and says she enjoys the support of parents and in-laws. (Played by an actor)

Indicates that sometimes girls are pushed into having unprotected sex. (Actor)

I think girls care more about getting pregnant and catching something. But boys are more careless about it and what, what I've seen with my friends, some boys, they're quite pushy for you to have sex with a girl, without using a condom.

It's like they don't have a condom, they want to have sex. You say, 'Well I don't want to do it,' but then they'll say, 'But it's OK', you know, and then they'll just pressure you and then you end up having it.

Explains that after hearing about her mother's infection she resolved not to use an IUD. (Actor)

Yeah, cos I spoke to her about using, putting the Coil in. She told me, she advises me not to. She, 'cos what happened with her, she got a cut from the Coil in fact, and then she had a really bad infection, and she said that after telling me that, that kind of put me off. So I thought I'll stick to the Pill.

Describes the type of help she receives from members of her family and her in-laws. (Actor)

Explains that in her culture the starting of a girls period is celebrated by the whole family. ...

Well traditionally in my culture, when a woman has her period, there's like a full sort of party for her. And they cook her a big chicken, which she has to finish by herself, and things like that. So that's when I started my period, that's what happens'

It was kind of embarrassing because my Dad was there and my brother was there, 'Oh, no she's got her period' and I was all like on, so the whole house knew but you know.

So it's something that it is celebrated?

Yeah, because in our culture it's like you've become a woman.

So, your mother, your father and your brothers and, and your second family also?

Yeah, there was my cousin, my uncles, there was this big chicken there, and they all go 'Ahhhh' and held it up. God, I was a wreck.

And you had to eat the whole chicken?

Yes you had to eat the whole chicken on your own.

So what does it mean when you're eating the whole chicken?