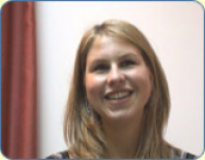 Age at interview: 24
Brief Outline: Thinks that Depo Provera is the best contraceptive method for her. (Played by an actor)
Background: Final year at University. She is in a serious relationship, and she and her partner agreed to go for STI testing before stopping using condoms. (Played by an actor)

Describes how important sexual performance was to her as a teenager. (Actor)

I suppose you sort of, you are obviously seeking pleasure in some form but I think at the beginning, especially when you're younger, you're really just trying to sort of tick boxes. I've done this, I've done that, I know how to do this, so I'm not going to look stupid if someone asks me to and I don't know what they're talking about.

And 'I read in a magazine the other day that it's a really good way to such and such' and reading magazines is a lot of pressure. It's indirect but they're saying oh, this month's top twenty ways to please your boyfriend or something like that' Like oh my God, I've got to learn them, and if I don't know a number 19 and this kind of thing.

I think a lot of it was age.  And a lot of it personality as well and I used to be very obsessed about how I looked and my weight and that kind of thing. And I think that was then reflected in my sexual relationships; it was all about performance, looking good, doing the right things, performing very well.

I came from an all girls' school, at senior school, and there was a lot of pressure to look good.

So I'm more comfortable with my body now whereas before I would always look like... I'd do stupid things like I wouldn't eat for 8 hours before in case my tummy looked big and things like that.  And you just think for God's sake, no-one really notices that.

Very much so. Particularly in the last relationship, we said at the beginning that it is important to both of us, we don't want to get this wrong, so we'll use condoms and the pill until we've both been tested for STDs; once we're clear we'll rely on the pill. And then I decided, actually I'd been on the pill for quite a few years and maybe it wasn't the best thing to sort of be on for many more years.

And I used to get quite a lot of pretty impressive mood swings around my period so I went on to the Depo injection which is the best thing since sliced bread. It's amazing, it's the best thing I've done I think.

Why do you find it so good?

It's like a weight taken off from around your neck and there's no worry. It's every sort of 11 weeks, you can ask the Family Planning clinic to ring or write and remind you so you can't forget. The injection is not that painful and you have no bleeding or menstrual symptoms, nothing. It's just like a clean slate, you can just live your life like a man, if you want to. There's nothing holding you back.


Talks about the beneficial side effects of Depo Provera. (Actor)

My moods are a lot better. I used to get quite depressed quite frequently, not like seriously depressed or anything but I used to feel low, quite a lot of the time. And I used to be a lot more concerned about my body shape and I'd get a lot of sort of water bloating coming up to my period.

And now that I'm on this injection and my hormone levels are straight, I don't get any of that. And I feel, I mean around the time when I would have been having my period I sleep a lot better and I don't get these irrational mood swings and I just think it's fantastic. I haven't, the only thing I've noticed, when I was on Dianette that's the one that's supposed to be good for your skin isn't it?

I was on that one a bit before I changed over so I noticed a bit of a change in my skin for the first couple of months when obviously the Dianette wore off. But it's settled down now and my weight's a lot more stable.

Explains why she and her partner decided to go for a check up before they stopped using condoms. ...

The person I'm going out with now, that's been a couple of years, and what we did, well we'd been very good friends for a long time before we ever sort of had a more serious relationship. So we agreed that until we had both been to the STD clinic and been absolutely cleared, that we would use condoms, even though we both hated them. And then after that we went back to using the pill, once we both had a clear certificate of health.

We just thought that this is what we'd hoped was going to be a very important relationship and we hoped to stay together. And we wanted to make sure we did it right, from the beginning, and didn't sort of give the other one anything horrible that we had from our past. We'd never felt comfortable enough to sort of broach that sort of subject with anyone before.

He was the first person that I sort of felt comfortable enough to say 'actually, I'd rather you went and got tested'.

I think it was because I'd had a scare with someone previously who I had a relationship with and we'd relied on the pill and after we split up I had a lot of low abdominal pain, there was no discharge or anything else like that, but I was scared enough to go and get tested and everything. And there wasn't anything, actually it was fine and they decided it was sort of stress.

I thought I had Chlamydia or something, I really did. I was really quite scared that I'd done something very stupid.

Explains why she used to 'hate' periods. (Actor)

I love it, I love it because I used to hate it. I used to be so active and it would always get in the way of sport. Like I'd be outside working all day and it was such a hassle to sort of having to go to the loo twice a day and change things and there wasn't a bin to put it in so you'd have to carry things around until you got home.

And oh, I hated it. The last thing you want is someone, some childish 18 year old lad going ha, ha, she's on the blob or something equally crude and horrible, which they often do, of course. They don't change when they get 18!

I hated it, I used to find it quite painful and I would find I'd get a lot of night sweats and really grumpy.

Remembers that for several years she was worried about having 'an accident and leaking' while at...

And I remember obsessively every time I stood up looking and checking I hadn't leaked on the chair and then always checking the back of my skirt and hoping that nothing had happened and hoping that no-one would see me checking. And like there never ever was a problem but I always thought there was going to be one, always for about 5 years or so.

No longer than that, because it was from 10 until, probably, probably until I was 17 that I was confident enough to say I mean, come on, it's not going to happen. If it hasn't happened yet, why is it going to start happening now? You can stop checking the chair every time you stand up!

So you were worried about it?

Yes, because it always made me feel really hot and sweaty so that you always felt a bit sort of damp and clammy and then you were sort of 'oh my god, it's happened, it's happened, I knew it was going to happen'. And you would stand up and think, oh okay, carry on with the rest of the day, because they always had those awful plastic chairs at school.
Previous Page
Next Page