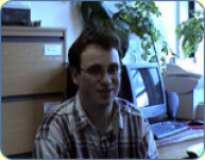 Age at interview: 21
Brief Outline: He participates in a gay support group run by the Terrence Higgins Trust.
Background: Recently graduated, works as a manual worker in a supermarket. As a gay man thinks that it is important to provide young people with a safe environment to learn about their sexuality.

Talks about his experience when he used a GUM clinic.

Talks about his experience when he used a GUM clinic.

View topic summary
SHOW TEXT VERSION
PRINT TRANSCRIPT
Well, I feel very uncomfortable talking to my General Practitioner about this sort of thing, simply because my General Practitioner is a friend of my family and although he's s'posed to be you know, he's s'posed to be completely confidential etc. I've never felt particularly comfortable telling him. I mean I've, as I said before I've used the clinic, the STI clinic once when I felt specifically that I was might have been presenting myself at some risk.

I found it to be an unwelcoming experience and something that I definitely wouldn't have gone through with on my own, had I not had an adult there with me, I think I would have found it very traumatic. I wouldn't say I found the staff particularly helpful but there was a counsellor there who did discuss things with me and she was very friendly.

Why didn't you find them particularly helpful?

Well I mean not helpful, but they were very matter of fact which is fine, but I can imagine some people finding that incredibly difficult to deal with. Because of embarrassing and things like that and they were asking all these detailed questions etc, and to be fair if you got, if you've come to that situation, if you turned up at the clinic they shouldn't have to ask you all these questions. They should sort of, I think they should test you for everything and sort of give you advice, but not sort of...

They ask you detailed questions about your own sexual life?

Yes, which which for some people might put them off doing it again, you know. I think it's a situation which is, I think the one thing that majorly put me off was the fact that you have to book in advance where I was before, you have to make an appointment and when you turn up your appointment is not kept to the time, its after the appointment time and therefore you sit around for 3,4,5 hours waiting for it, which is enough to put you off doing it, I found that to be pretty bad where I was.

I also found that I missed one of my appointments in fact and although I was told that my details would be kept on file only for records. When I started receiving cards through the post saying I'm incredibly concerned that you didn't turn up for your appointment and things like that saying what my appointment was for, I felt that they crossed the line of patient confidentiality in the sense that someone else could have opened my mail.

I mean you can often have the situation when people have the same surname and the same first initial or something, and therefore someone else could have opened it and read the card or whatever.

Stresses the need to be selective when searching the internet.

Stresses the need to be selective when searching the internet.

View topic summary
SHOW TEXT VERSION
PRINT TRANSCRIPT
The internet I would say, if I now go and look for things I would imagine the internet is a form that I use, its not necessarily... and I would say the Department of Health's Site is quite good actually, the NHS Direct sort of site where you can look up things is quite a good and informative site, but a lot of the stuff on there is rubbish and you have to be very careful and selective where you choose. Not from that website, but from the internet in general.

Can you tell me what do you find useful about the website from the Department of Health?

Well it's factual, its got a search facility, you can search through and I think because it's the Department of Health, the information should be pretty much accurate and up to date whereas some of the sources on the net are anecdotal and you have to differentiate between, on other websites things are anecdotal, whereas this one you can be pretty confident it comes form a doctor or nurse or something who's qualified to actually talk about it.

A gay man compares the emotional and physical differences of casual sex and sex in a relationship.

A gay man compares the emotional and physical differences of casual sex and sex in a relationship.

View topic summary
SHOW TEXT VERSION
PRINT TRANSCRIPT
Can you differentiate at the physical level how different are or what is different between sex within a casual relationship as opposed to a long term or a more serious relationship?

At the physical level for me, you might, I think you're under a lot more pressure in a one night stand in the sense that you don't know the other person, you don't know what they want necessarily, you're trying obviously to satisfy that person and they're trying to satisfy you.

In your opinion, what are the good things you associate with relationships and sexual activity?

Good things with relationships, that one is an easy one for me. I think companionship, being able to have a good time, enjoy yourself, have some common interests but not all of them. Be able to enjoy each other's company on a number of different levels but certainly physically as well as you know, the comforts, knowing that there's somebody there, someone to talk to, somebody to share things with, the good times and the bad times, to be a shoulder for them to cry on and the other way round too.

Describes his vulnerable situation before coming out.

Describes his vulnerable situation before coming out.

View topic summary
SHOW TEXT VERSION
PRINT TRANSCRIPT
No, before I was at University when I was doing my A levels, 'cos I went into my A levels separately from my school. I left school when I was 16, then went onto a College of Further Education between 16 and 18. I was feeling quite isolated and didn't know quite what to do about my feelings etc.

And actually I met somebody at a a young people's sort of youth training scheme type thing on a sort of youth work, and they sort of they were very predatory towards me I suppose, and they sort of slipped me their phone number and things and I thought it was a bit odd at the time but I thought right I'm going to come out to this person because they are completely anonymous you know and if there's someone I don't have to ever see again if I don't want to.

When I did tell them, me and them sort of arranged to meet up etc and we had a sort of sexual relationship. Unfortunately he, well he was quite predatory and obviously wanted me to do things that I really didn't want to do things that I obviously I'd had the education at school and therefore, for things to know what was unsafe and what shouldn't be done and everything but they still tried to get me drunk and get me into situations.

Eventually I stopped talking to them and then really I didn't really sort of have any more sexual experiences until I went off to University where I joined the LGB etc and I also joined the local Youth Group run by a National Charity 'OK'.
Previous Page
Next Page