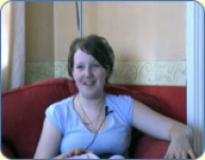 Age at interview: 18
Brief Outline: Treated for Pelvic Inflammatory Disease and Chlamydia.
Background: Full-time mother lives on her own with her ten-month-old daughter. She would like to continue studying and to work with children.

She found herself pregnant and homeless at the age of 16.

Myself, I supported myself and my daughter, because I think really, like every time I want to talk about the pregnancy or the baby or if I was confused about something or I didn't know what to do, they were like, 'stop talking about it', 'don't talk about it, I don't want to know', so I was like... I had to do everything myself.

How old were you then?

Talks about contracting PID and Chlamydia and of being told that her chances of conceiving again...

Explains the medication she was told to take and the instructions she received from doctors.

Show in context
SHOW TEXT VERSION
PRINT TRANSCRIPT
What treatment did you receive?

I can't remember what the tablets were called but they gave me two forms of tablets.  The first time they gave me normal tablets there was ones that I had to take for two weeks and then ones I had to take for a week to clean up the infection. I weren't allowed to have any intercourse at all in that time and then the second set that I received when I was pregnant was special pregnancy ones to stop the baby, cause if you have a STD when you are pregnant it could make you miscarry and give you stillbirth and problems during your pregnancy and things like that, and you are given special tablets and that to take.

For how long did you have to take those?

Did you have any ill effect?

No, you just weren't allowed to drink alcohol or be in direct sunlight or anything like that.

And how many months pregnant were you?

Six weeks, I was six weeks when I found out, when I found out the second time, when I got Chlamydia that I was pregnant, and then I had to go to the clinic to make sure I hadn't caught anything again and I did.

Describes her anger about the inadequate sex education she received at school and from her own...

They don't tell you about relationships?

No, they don't tell you nothing, sex education for schools is the most rubbish thing that I have ever had in my life, I think it would be better if a young person goes into school and does it, because those stupid women they think are they going to offend us, but if they don't tell us the details, how are we supposed to know?

They get these like you know projectors they point at a male's body and  woman's body so there's the man's penis and the girls vagina, this is the ovaries, and that's it they tell us nothing, so its quite hard. Like my mum she never told me anything, it hurts because like my mum should be there for me, if [daughter] asks me a question I tell her, I won't give her no stupid Bird and the Bees, I'll tell her how it is so she knows.

Talks about the financial and emotional difficulties of being a single mum.

SHOW TEXT VERSION
PRINT TRANSCRIPT
Lack of emotional support and practical support, I can't do it all by myself, it's so hard being a mum, it's really, really hard. It's not as easy as people think it is. I'll have a baby, I'll look after the baby, you can't hand that child back at the end of the day, it's yours for life, and they are constant twenty-four hours attention.

It's ... sometimes I just sit and cry because I'm so stressed with her, I mean not with her, but because she needs so much attention and I haven't got the energy to give her all that attention that she needs

I don't really know, all that I can really say is that it's not easy being a mum, its one of the hardest things that I've ever had to do in my life is be a mum, the attention they need, the amount of work it is to be a mum to make your home safe for the child, to make sure your safe to make sure your child's safe constantly, make sure they're okay and make sure they're fed and clean and got all the love they'll ever need.

Explains that her family planning clinic gave her the necessary contraceptive advice.

Show in context
SHOW TEXT VERSION
PRINT TRANSCRIPT
I was fifteen when I started going there and I was like 'oh what do I say, what do I ask for', and I just went there and they were a really friendly service and they were really kind, confident, friendly and they help you whatever your problems.

Did they explain things to you?

Yeah, they explain everything to you, they explain all these sort of ins and outs of the pill and the condom saying its not, sometimes it's not 100% and they say all of that.