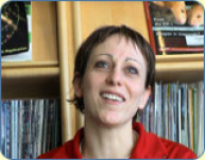 Age at interview: 25
Brief Outline: She had irregular bleeding and decided to go to a GUM clinic and be tested for STI's. Results of tests' negative. (Played by an actor)
Background: Graduate student who lives in shared house and has a steady boyfriend. She says that as a teenager, her mother told her about family planning and sexual health. (Played by an actor)

And also I didn't feel much like sex when I was on the pill, I found that. So I came off the pill and obviously I was worried about pregnancy and I knew someone else, vaguely, who we'd discussed, and they had a diaphragm, I hadn't really thought about that as a form of contraception before. But I used that for a while in conjunction with condoms.

Do you have any concerns about the health effect of any of the contraceptive methods?

I found when I came off the pill it took a long time to get my period back and that was, I don't think that's typical of everyone but that was my experience and that was why I was off the pill for so long. And after that I didn't really feel like going back on the pill.

It took nearly 2 years for my period to come back regularly and I think there could be other factors but I think that's a hassle because you don't know every month. I don't know, could I be pregnant?  And I just don't know because my period isn't regular, things like that. I mean I don't think that's dangerous or anything, I wasn't worried that it was something dangerous but it was just a bit annoying.

I don't particularly want to use a contraceptive pill again. My blood pressure is quite high in the family anyway and so that's something which, I know when you get older as well is not so advisable. So the doctor thought that that might be quite a good method for me.

So were you taking your blood pressure regularly when you were on the pill?

Not that regularly but I went, I mean they check it and it was fairly high. Not dangerously high but probably in the longer term, but that's just something in my family. I mean my mother has got high blood pressure so...

Explains that she has been discussing with doctors the possibility of having a coil fitted and...

I know with the IUD, I've been thinking about getting an IUD because in the past the doctor at the Family Planning clinic said that they sometimes use that now in women that haven't had children. It's becoming more common.

I know there's a risk with that, there's a small risk when they're inserting it, you can get infections and damage to the womb but I think that's quite a small risk. But that's something to think about

Have you talked to your doctor?

About getting an IUD?  We talked in general but they sort of said I have a think about it and they've got special sessions there, so I haven't decided. I've got a friend that's got one and I'm going to talk to her about it before I decide.

Do you have any reason to believe that there may be a problem if you use it?

Well like I prefer not to be using condoms for the sake of sexual pleasure and also because it can be unreliable. I'd rather have a method that, you know, I knew was reliable but I don't particularly want to use a contraceptive pill. Because of my high blood pressure in our family anyway and so there's something like, when you get older as well it's not so advisable.  So the doctor thought that that would be a good method for me.

I mean I didn't know until, I thought, until I'd discussed it with the doctor, I didn't think that you could have an IUD unless you'd had children, for example. And they said oh no, you can, more and more people do, that kind of thing, so yeah, there could be more knowledge.

Gives examples of the kinds of questions health professionals ask and explains the instructions...

To get the emergency contraception? I just went up to the clinic and explained the situation and, you know, they just sort of go through it, they discuss things like if you've been at risk of sexually transmitted diseases, you know, if you've had unprotected sex that kind of thing. And just sort of discuss those sorts of aspects and why you weren't using contraception!  And then yes, in that case they give you two...  Do you want me to tell you about the actual technique?

They just give, you have to take 2 pills, hormone pills, 12 hours apart. Take one straight-away and then the second one exactly 12 hours after.

Felt under pressure by the family planning service to use the contraceptive pill. (Actor)

I think quite good. I don't know, the last time I went I sort of felt a bit under pressure from them to go back on the pill and I can understand it because I'd gone to get the morning-after pill because, you know, I hadn't been consistent in using condoms. And I can see why, from their point of view that I should be on a more reliable form of contraception.

Did they sort of talk to you explicitly about... did they ask you?

Yes, they sort of said why don't you have the contraceptive injection because, that's another one that I forgot about! Because of not being reliable in taking pills. I had sort of already explained that that isn't the reason that I don't want to go back on the pill. And then they were sort of saying, well you know you could go on the mini-pill. But I think they were just sort of making me aware of more options.

It wasn't a negative experience, I just felt that they'd got a bit of an agenda! But that's their job so it's fair enough.