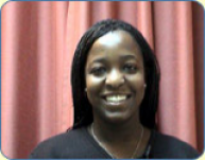 Age at interview: 23
Brief Outline: She does not believe in sex before marriage.
Background: Black African woman who lives with her mother, brother and sisters in the inner city. She has a university degree and described herself as being brought up in a loving and religious family. (Played by an actor)

Explains her reasons for not agreeing with sex before marriage. (Actor)

Yeah, because obviously the Christian text is the bible, in the bible it typically states that you know sex before marriage is a no no, there are very good reasons for that. A lot of people do say to me, 'this is the 21st century, what's wrong with having sex', my response to that is god made or created sex not just for enjoyment but he taught that it's sacred, it's special and it's something two people who are committed to each other can enjoy.

I think that commitment can only come in the bounds of marriage, in the bible' I mean if sex happens outside marriage then lots of problems can come up, you know I'm not saying just because some people do have sex before marriage things will go wrong, I mean a lot of people have very good relationships and things like that, with sex before marriage.

You know, for instance what if they have a child out of wedlock, I mean it's a very old fashioned way of thinking but affection and sex means a lot to me in a relationship and well I'm just really quite wary of things like that.

Says that most of her school class mates now have children

What are your views about that, about them being teenage mothers?

Teenage mothers' Well I'm not a big fan of that I must admit, because we all got sex education at school, but it's funny that some people actually chose to take the advice and listen and some people didn't that's really funny.

It goes out of their minds, I mean they forget that they can get pregnant, get diseases or whatever'

Yeah, because we're all in the same class and it just surprises me that would happen to some of them, I don't know what their reasoning is or anything.

Yeah, because I had a very close friend when I was at school, I was closest with her in my class and when I found out she became pregnant it really did upset me because I thought we were both going to go to college together, you know. She had her own life and we kind of drifted and we went our own separate ways. I really loved her, it really, really upset me, you know. I don't want to sound like children are bad or anything, I mean there's nothing wrong with having children and things like that and having families'

I understand that, but I think one of her reasons about being pregnant was like, it's not that it happened by accident, it was probably because she was lonely and it was like ok, she needed somebody to care for, she wanted someone to care for her, she needed that unconditional love.

Ambition is the best contraception - her family always encouraged her to succeed. (Actor)

What do you think should be done to discourage girls not to get pregnant, do you have any ideas?

That's a really difficult question, let me think about that one'

The thing is that I feel that it really does start from your own family, your family background and what your parents teach you. It's not like your parents should be like a mantra or be drumming things excessively into your head, but when they say things like, when they drum things into your head about success and you need to succeed, do well for yourself, not like in an abusive way but if they say you know, you must do well, because you can get better things for yourself then that's alright.

If they did that like for weeks when you were younger then it just becomes this thing that you realise that you really want to do well when you're at school. So like for me, I get really good grades and you know, so that I can become really independent, can have a life that I want to have.

I don't always want to be living in the part of London that I'm living in now, you know I want to have nice things, get educated, get a job and those sort of things, nothing can hold me back, you know that type of independent thinking.

But you know, by having a life where your family background is not so great and your parents don't really care what you do and if you're out all night, you're drinking and they're not really interested in your school work, what that means is that they're not really interested in your social life either and what you get up to when you're out there. You end up making mistakes, you know, your parents don't really care and they really don't talk to you about it, you know.
Previous Page
Next Page