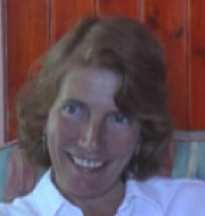 Age at interview: 47
Age at diagnosis: 45
Brief Outline: Diagnosed 2 years ago but symptoms for 4 years. Currently on no medication but did take Sulphasalazine for 5 months before stopping because of side-effect of flaky skin. She has also had steroid joint injections and taken NSAIDs.
Background: Child minder, married with 2 children

She delayed going to the GP for advice because she had nothing specific to show.

She delayed going to the GP for advice because she had nothing specific to show.

View topic summary
SHOW TEXT VERSION
EMBED CODE
PRINT TRANSCRIPT
I kept having lots of aches and pains at about, at least five years ago and I would be shopping and carrying bags and my elbows would, you know, I really couldn't they the bags for long. And I used to go to bed saying, 'Oh, my feet are really hurting,' and I'd be spraying foot spray on them every night thinking, 'What is wrong with my feet?' And this went on for two years and, I imagine at least, and, and then I went on holiday and I played badminton one night and my wrist was really, really bad and I said, 'Right I can't play badminton.' But the next day it was the other wrist.

So I thought, 'Well it can't be the badminton.' And that's when I went to the doctor's. Which was about 2000, no, 2000. And she said straight away 'Well, you know blood tests, I'll send you to a rheumatologist,' which I had guessed she'd say 'cos I knew someone else who had rheumatoid arthritis. And that's when they said I had it.

So, you put up with the pains in your feet for quite along time. Did you '?

Yeah, I just, I just thought it was too much walking or, I didn't think anything when it was in my feet and yet when I think back now it must have been the start of it a long ago because they really did hurt. And I was buying that Scholl foot spray all the time and thinking, 'Oh my feet are hurting.' And, of course, when it started, when you're in bed and, you know, your hips are hurting you think, 'Mmm', every way you lie something hurts it can't be normal.'

So were you, sort of, putting off going to the doctor or '?

Yes, 'cos I don't like to go unless you've got something, you know, physical to, to show, and in the end I thought, 'I can't wait any longer'.

Relieved at knowing diagnosis and feels excused by friends when she can't do things.

Relieved at knowing diagnosis and feels excused by friends when she can't do things.

View topic summary
SHOW TEXT VERSION
EMBED CODE
PRINT TRANSCRIPT
Well in a way it's a bit of a relief 'cos then you know that, you know, there's a name for it [laughs]. And you're not just saying, 'Oh dear, my feet are killing me again.' You know, there's a reason for it. And also it means if there is something wrong you can sit down and say, you know, 'I'm stopping, because, 'cos I've got arthritis' [laughs] 'Cos one of the things, when I went to the shops with my friend across the road who's, 60, 13 years older than me and before I'd been to the hospital, she was whizzing round all the shops and I was sitting down.

I'd say, 'Well I'll just sit down here while you go in there.' And I thought, 'This is ridiculous.' And she's one of the people I said, when I got there, you know, 'She's 13 years older than me and whizzing around and I wasn't.' So, and then go, go to Marks and Spencer's and she stands in the queue while I [laughs] while I sit down to get the coffee and things like that and I'm thinking 'This is terrible.' But once you've got a name, you do, you know, you, you had an excuse then, for you to sit down and say, 'I can't do any more, I can't walk that far.' So it's better really.

Abnormal blood results led to a endoscopy and a colonoscopy.

Abnormal blood results led to a endoscopy and a colonoscopy.

View topic summary
SHOW TEXT VERSION
EMBED CODE
PRINT TRANSCRIPT
Well she phoned [cough] my own GP phoned me up and said, 'You must come back.' There was an abnormal blood test and she didn't know what it was, whether it was to do with rheumatol, rheumatology or not. So I had to go and have an endoscopy. And a colonoscopy all on the same day. And for the colonoscopy you had to take this terrible medicine the day before and be by a toilet [laughs] all day.

So I still did the child minding and it completely washes you out. And so, you've got absolutely nothing in your bowel, what, whatsoever. And and then I went to hospital the next day and, having had nothing to eat and they give you Pethadin so you don't really feel it and because I was having both ends, they give you more of it. So I didn't feel anything. So they looked down the throat and up my other end and that's the only time I was aware, I could feel this stuff poking about.

It took about half an hour and there was absolutely nothing, they couldn't find one thing wrong with me. So they put it down to anaemia, because of the arthritis. Which though it didn't, it proved that there was nothing wrong inside it meant it was, when they gave me tablets and an anti-inflammatory actually, they work don't they badly on your stomach if you're that susceptible for indigestion or ulcers, I remember so, when they gave me anti-inflammatory they knew that wouldn't be enough, effect and it meant when they gave me the sulfasalazine they knew that one side effect I wouldn't have would be anything wrong with my stomach.  And as I never suffer from indigestion either, that was all right.

And how quickly did they organise that?

Really quickly. I'm, I'm sure I said, 'I'm going on holiday in 3 weeks,' and they said, 'We want to do it before you go.' Because they were worried, so worried about the blood count. So I had it in two weeks which, you know, NHS that's pretty good going, isn't it?

She has had to change how she holds and picks up babies and children.

She has had to change how she holds and picks up babies and children.

View topic summary
SHOW TEXT VERSION
EMBED CODE
PRINT TRANSCRIPT
Well I've tried not to let it affect me at all because when I first had it, oh yes, oh jumping back now, when I, before I went to the doctor's I thought why I was getting a pain in my arm was because I was pushing a pushchair uphill one-handed, you know, and holding a child with the other hand and I thought, 'Oh,' and I used to keep thinking, 'I'm getting too old for this, you know. I'm getting too old to be a child minder.' And, so there's things that I now don't do, is that the question?

How did it affect me? [Hmm] There's things I won't do. Like when I'm pushing a pushchair and I've got a toddler I always put the reins round my wrist and I don't hold their hands, I need both hands to push the pushchair. And I've got to make them hold it. And then you don't want them to hold the pushchair when they get too big 'cos they drag on it, and you're pushing harder.

So, I've lost my thread. So I try not to let it affect me but it does affect my work as, you know, I don't get down on the floor and play with them very often 'cos my knees are stiff. And I change babies' nappies on the table whereas before I'd do it on the floor. But then that has its drawbacks because my wrist is the worst thing and of course then you've got to pick them up to put them on the table. So I usually, with the bad wrist, sort of hook them up under the legs, so I'm not using, using my wrists I'm using the, my el, forearm.

And if you go out and there's no seat at the park, I don't like to sit on the grass because it's hard to get up. So I stand there thinking, 'I wish there was a seat so I could sit down.' So but in general I just try to carry on as normal.