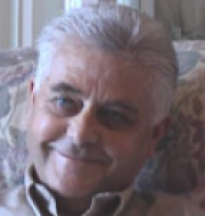 Age at interview: 58
Age at diagnosis: 56
Brief Outline: RA diagnosed October 2001 after reduction in mobility and general lethargy. Had side effects from Sulfasalazine so is currently taking Methotrexate 10mg/wk +folic acid (2 tablets/week), Rofecoxib (an NSAID which had now been withdrawn) 25mg/day & Ramopril (blood pressure).
Background: Self-employed carpet fitter who has had to reduce work to part time since onset of RA. Married with two adult children.

It's helped to discuss his arthritis with people he meets through work.

It's helped to discuss his arthritis with people he meets through work.

View topic summary
SHOW TEXT VERSION
EMBED CODE
PRINT TRANSCRIPT
No I think you should be openly, open-minded about it in all honesty, not to be frightened of it. No I'm open-minded about it basically. And the more that you talk to different people, especially going back to elderly people, shall we say again, a lot of my customers are elderly people and when you talk to people it's amazing the amount of people that suffer with that condition. 'Oh, I've had that for, I've had that for 10 years' [laughs]. It's no, it's a, it's nice to talk to different people about the condition and how they, how they sort of overcome, how they cope with it, yeah.

Wonders if the anti-inflammatories have any real effect.

Wonders if the anti-inflammatories have any real effect.

And you say you take anti-inflammatories every day?

But it still swells up in the evening?

It has all the time I've been taking them, whether they would be worse without the inflammatory I don't know.

Have you tried leaving them off?

No. I'm reluctant to leave them off because …

I'm not suggesting you do.

[Laughs] No but, being, you know, obviously you don't know the cond, it's like the tablets I'm taking, you don't really know what condition you would be in if you weren't taking them. You could be a lot worse. Even though you don't feel that much better by taking them. So you're reluctant to leave them off, any, any of them, not that I would but, the inflammatory ones I'm taking, as I say, I don't really know if they improve the situation or not.

After increasing the dose of sulfasalazine he felt generally unwell, dizzy and 'as though he'd...

After increasing the dose of sulfasalazine he felt generally unwell, dizzy and 'as though he'd...

View topic summary
SHOW TEXT VERSION
EMBED CODE
PRINT TRANSCRIPT
I was generally feeling unwell, as though I'd been drinking, not, feeling sleepy and dizzy basically. No other, but generally not feeling well in my head. Feeling, all the time feeling very, as though you'd been drinking. You didn't feel focused at all. That was the only, the only one which I couldn't handle and I was, I wasn't on the maximum amount of medication at that time. I think I was on about 6 a day and it had to be, yeah it was 6, was it 6 a day? I'm just, I'm just confused about how many I was taking but I certainly wasn't on the maximum, maximum dose and obviously I thought well if they've got to be increased there's no way I'm going to continue taking those. And I'd like sort of an alternative medication.

I was on medication for about 12 months. 12 months, I would think. But obviously not up to the, to the maximum amount that I had to take them, because of the fact of how I was feeling, it was probably after 2 or 3 months I did I was finding the, once I'd increased them from the starting, the 2 tablets per day up to about 6, is when I obviously I was a bit concerned and thought well I can't go on as I was going on with the, with how I was feeling generally. I know with all medication you do get side effects but some you can tolerate and some, some you cannot. And I hate feeling, feeling sort of dizzy or heady, 'cos you don't just feel like, able to, your able to do anything.

So did you go back to your GP?

No, I didn't go back to I did actually go to my GP but he didn't say leave them off entirely. Just to carry on the dose I was, until I was referred, until I had my appointment at the at [hospital name]. And the lady I don't know if she was a consultant, no she was the under-study for the consultant, I forget the lady's name but, she said well I think we ought to try methotrexate and, as I said, I was reluctant to but I think on hindsight it was probably the best, best thing I did.