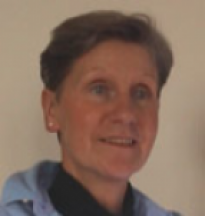 After several visits to the GP with painful wrists and swollen joints she was referred to a...

After several visits to the GP with painful wrists and swollen joints she was referred to a...

View topic summary
SHOW TEXT VERSION
EMBED CODE
PRINT TRANSCRIPT
Well it really all began about 5 years ago just as we'd moved into this house. We'd been here a few months and I started getting pains in my wrist. Nothing much to start with but just slowly got worse really. I was having trouble writing letters, and then I would get sort of swellings in the joints, my wrist and I went to see my GP, the new GP, and I was just given Ibuprofen and sent, sent away and see how it goes and I think I probably visited him about 3 times and this just got worse and worse.

I couldn't sleep at night time because I was getting uncomfortable I couldn't get out of bed in a morning without difficulty, and then one particular morning my arm was so bad, I just cried and my husband said, 'that's it, going to get you into the shower, get you down to the doctor'. So we went down to the surgery and they then said, ' Well we'll refer you to a specialist' and so I think, within a matter of weeks I had an appointment to see the consultant at the local clinic, and had x-rays and all the rest of it, blood tests.

And when he actually diagnosed rheumatoid arthritis'I cried. But it wasn't because I was sort of distraught at being told I had rheumatoid, it, it was because I was relieved really, to finally know what it was and to think well, now I know maybe they'll be able to do something about it.

View topic summary
SHOW TEXT VERSION
EMBED CODE
PRINT TRANSCRIPT
Well, the splint helps, is, it supports the wrist really, and it keeps the wrists still. I mean it's not a good idea to wear them all them all the time but it's a good idea to put them on when you're doing things like ironing or writing or like holding a book 'cos I find the telephone, if I have, if someone rings up and they're talking for a long time my joints kind of like seize up and they, they lock.

And you'd said you'd managed to find some modern ones?

Yes, yes. A couple of years ago I read a, I read an article in the Telegraph - I don't remember the lady's name off hand - but as a child she'd had problems and then as she got older she'd been diagnosed with RA and just couldn't bear the clumsy, dare I say it, National Health ones, which are fine, do the job but very soon look dirty and, you know, the, the velcro goes and everything.

And I read the article and of course she had said that she was so fed up with this that she got a designer to design something that would do the job but, but would be sort of like, almost like a fashion item that you could wear. And they do them in different colours, black, cream, blue - I forget what else - and I sort of put the article, I shall follow that up, and I put it down and forgot all about it and then about 8 or 9 months later I thought 'Oh I'm going to get in touch with these people'. So I got on the Internet and ordered a pair and it, it was only when they came that I realised if I'd actually said that I had been diagnosed with the rheumatoid I wouldn't have had to pay the VAT on them, because that's an allowance they make. And these are wonderful, they're black lycra, mine and the, the actually splint is plastic.

So you have to measure yourself, your wrist and I think the hand, take the wrist measurement and then they decide what size you need, whether it's small, medium or large and then when they come you actually put the plastic splint into hot water and then you put it back into the splint, the actual wrist material and mould it to fit your wrist. So it, it's, it's to fit you perfectly and I mean at the moment it's not a problem for me but the zip has a big ring at the bottom so you're not, for someone who's not very good with their fingers, you don't have the little zip, you have a ring pull on the bottom so you can just pull them on and off easily.

And I would say the only down side is that, you know, you wouldn't keep a watch on of course because it's uncomfortable, so you would have to put that on the top. But the, the ring pull does tend to ride up a little bit so if you haven't got a sweater, a long sleeved sweater on, it would be a nuisance. But I mean like this time of the year when you would probably wear them more, they are a whole lot better because you can wear a jumper over the top and then it just looks like you've got a, a sort of half glove on. You know, so they are very comfortable. And of course they're completely washable so you just take out the plastic splint and throw them in the washing machine. You know, so you can use them for everything. So I am very impressed with those.

Swimming has helped her physically and she enjoys the social side too.

Swimming has helped her physically and she enjoys the social side too.

View topic summary
SHOW TEXT VERSION
EMBED CODE
PRINT TRANSCRIPT
But, and then I think it was about two years ago now I started swimming and that has just been fantastic. Because that is something I can do and I do it five days a week, every morning. I started off it, doing, it was this time of year, October, I got into the pool and I could do 35 lengths and I thought by Christmas I want to swim a mile and at Christmas I did. I was doing my 64 lengths in the hour.

And now there's a new pool opened, and the same group of people go, and we all sort of, I mean they're not all sufferers, some just go because they enjoy going but  we all sort of support each other, if you like, and I haven't been for two days this week so I'm already in trouble.

But I can swim now for about an, well I could swim for 2 hours if I wanted to but I don't because I have other things to do, but I, I have found that that has helped and my consultant, you know, just sees me, says, 'ah my swimmer'. You know, he's, he's really impressed that  of the you know, the way I've sort of dealt with it. I didn't think, 'Ah, my life has ended, I'm never going to be able to do anything'. I just thought 'Well OK, this is what it is and  I'm not going to let it beat me, you know. So I don't, I try to do everything as I did before, but in moderation and that seems to have worked quite well so far. I do still have bad days and sometimes the medicine upsets me .

But I would say in general I feel better now than I did, you know, sort of 4 or 5 years ago. So  and I think that it's really. That's sort of, you know, I mean when I tell people I've got RA, they, I mean it doesn't really come up in conversation, but if, if it does, and I say, they say 'I can't believe it, you know, you don't look as if you're suffering'. But I do, you know, I can't walk as far as I used to be able to .

But I do think that swimming has  has helped and I know that if I don't go, I miss, I miss not only the sort of social side,  but the fact that I've had an hour or an hour and half's exercise, that's  you know done me sort of good overall, not just my, my joints. 'Cos swimming keeps the muscles strong and of course the muscles support the joints, so it has to be good.

Uses the internet to check out media stories about 'miracle cures' for arthritis.

Uses the internet to check out media stories about 'miracle cures' for arthritis.

View topic summary
SHOW TEXT VERSION
EMBED CODE
PRINT TRANSCRIPT
Yes, because  first of all we'd seen, we saw the, an article in the paper about and of course the headline is 'New cure for rheumatoid arthritis'. And of course you immediately think 'Oh, wow, a cure'. And then it's only when you read the rest of the article and then go onto the Internet and find all the research that you find it's, it's not a new cure it's, it's, I mean they have done research and they've done trials but trials on a small percentage and it's been successful but you have to remember that it's, it isn't a cure it's just, you know, another way of treating it and it's only when you've sort of downloaded all these pages and pages of information and, and read your way through them that you realise, you know, it's, it's still a small step forward but it's not quite what the headline said in the initial  article.

So, but I, you know, I think it's useful because you know, it just gives you another insight into how the disease can be treated and how, how effective some people have found it. I mean, there are people who've, who've managed it using alternative  medicines. I mean, I don't, don't think that would be suitable for me but I'm, I'm not saying that it wouldn't work. You know, I just feel more comfortable with being treated the way I am, you know. So I would read it and, and, and listen to other people who say 'But I find it works' but I probably, you know, wouldn't want to, to go that way myself.