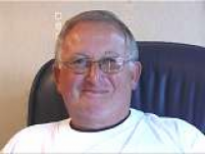 Age at interview: 65
Brief Outline: In 2004 he had urinary symptoms. PSA 9.5ng/mL. After a biopsy, prostate cancer diagnosed, and it was also found that cancer had spread to the bone of one arm. Hormone treatment with some side-effects, but feels well.
Background: Occupation' Retired plumber. Marital status' married. Ethnic background' White British.

Says that the biopsy was uncomfortable but didn't hurt.

Says that the biopsy was uncomfortable but didn't hurt.

View topic summary
SHOW TEXT VERSION
PRINT TRANSCRIPT
Can you explain in some detail what it's like to have a biopsy?

Yes well that's what I was just coming to yes it [laughs] it's, it didn't hurt, I mean it was uncomfortable, I mean you have to lay there, I mean it was all done properly and you put a gown on and you lay there and the nurse like talked to you about things which you want to talk about like holidays or whatever it was. And then you had like this, they greased up, like a, well I take, I take it was a, like a clipper sort of affair or something which they take, they only take like little clips out. And then they just inserted that and then...

In the back passage?

Yeah in the back passage and then they actually took, I think it was 12 they took and I mean to explain what it felt like it, it was alright in the back passage because you know you could, you could stand that alright but it was like as though they was firing, every time they done it, it was like a paper clip going into you, as though they was firing a paper clip in. So anyway that is what I had done, I had 12 and after that it was, you know it's quite alright. I mean I've talked to other people who's had it and like they all said it's nothing really to worry about, it's a bit uncomfortable but I mean that is all.

Did you have any side effects after that?

No, no, no they say that you, you could turn round and pass a bit of blood or something like that but no I had nothing at all, no pains, no nothing and everything was fine.

The specialist gives him his PSA result when he goes to the hospital for 3-monthly check-up.

The specialist gives him his PSA result when he goes to the hospital for 3-monthly check-up.

View topic summary
SHOW TEXT VERSION
PRINT TRANSCRIPT
Have you been given any information about the PSA test itself?

No, no, no it's just all that I know is that I've just got, they take a blood sample and then they know from there, that is sent to, to my specialist and then he will turn round and tell me exactly.

So you get the results when you go back to the hospital?

When I go back to the hospital and see the specialist which is every 3 months he tells me whether I'm doing alright or what.

Has he explained to you what's the normal range for a man of your age, does he explain that?

Yeah I think, well I think they said that it's I thought they said that you go up to 3 is it something like that 3 to 4? It's not, you know they're not really concerned.

And yours now is?

Well I'm down to 1.5 at the moment, I mean they even hope to bring it down further than that but I mean whether they do or whether, I mean it could vary I mean I don't know, I mean as long as it's not so high as what it was I mean that's the only thing which I, well put it this way I think what they've given me is working because I feel in myself feeling how I feel now I feel great and that is honest.

Feels he should have asked more questions but the doctor recommended hormone treatment. He is...

Feels he should have asked more questions but the doctor recommended hormone treatment. He is...

View topic summary
SHOW TEXT VERSION
PRINT TRANSCRIPT
Then I had my results, they came and they said that they was very sorry but I had prostate cancer and it was pretty aggressive, it was on a scale from I think they said 1 to 9 I had, no 1 to 10, I had 9.

Is that a Gleason score did they say?

Yeah they just said that it was on a scale of 1 to 9 but they still didn't know whether they was going to operate or whether I was going to have treatment, other treatment or radio treatment or what so that's how it was left at the time. But then say what they wanted to do then was to give me an MRI scan to see exactly what was going on there on the pelvis and down there so I went up about, it must've been 3 weeks later I managed to have an appointment for an MRI scan.

And then they turned round and said that they're sorry to say that it had gone to my bone and I said, 'Well what does that entail because it's gone to my bone and everything?' I knew I couldn't have an operation because the prostate was, it was gone too much.

But then when it had gone to the bone he also turned round to me, this is the specialist, he said that, 'The best thing now is that we'll just give you hormone treatment' which I said, 'Oh,' well to be quite honest with you I said, 'Well if it's gone for me bone then,' oh he said that it's only gone to my arm, not to, there was no cancer showing on this other hot spot, but only on the bone on the arm. So I said, 'Well can you take my arm off? You know, I'm not worried as long as it gets rid of it', sort of affair and he said, 'Oh well don't talk so silly, we don't need to do that.'

When he said I had bone cancer, I've never asked too many questions and that was where I would go wrong, really you should ask. And while I thought, once they said it had gone to my bone I was worried. Was that, was that going to spread elsewhere and if it is going to spread elsewhere is that the prostate cancer or is it some other cancer? Or you know those kind of things, I didn't know anything about. And they turned round and told me that it's only the prostate cancer and the treatment I'm having for prostate cancer will also treat the bone cancer. So you know that put my mind at ease a lot more because I'm thinking that is doing me well anyway.
Previous Page
Next Page