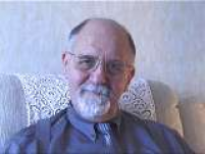 Age at interview: 66
Brief Outline: In 2004 developed a urinary infection, treated with antibiotics. Reluctantly he had a PSA test which was raised (31ng per ml). The consultant said this was due to the infection. He suggested saw palmetto, which has helped reduce urinary symptoms. PSA is now lower, 10.9ng per ml.
Background: Occupation' Part time university lecturer. Marital status' married. Number of children' 2. Ethnic background' White British.

Assumed he had a urinary infection so didn't worry while waiting for his PSA test result.

Assumed he had a urinary infection so didn't worry while waiting for his PSA test result.

View topic summary
SHOW TEXT VERSION
PRINT TRANSCRIPT
How long did you have to wait to get the results of the PSA test?

And how were you feeling during that waiting time?

I never actually felt that I had prostate cancer. I felt all along that it was a urinary infection and that in a sense it was all a lot of fuss about nothing. I don't honestly think that I ever felt that I, that I was particularly worried about what was going on, I was a bit annoyed about what was going on but I, I honestly don't think I was worried about it, I just didn't feel, I don't know why I didn't feel I had prostate cancer because I don't know what it [laughs] what it feels like to have prostate cancer but I felt that what I'd been suffering from if you like, which had the led the GP into getting me to have the PSA test, was a urinary infection, that it was nothing more than that, it wasn't serious and I wasn't greatly alarmed. I was a little annoyed at the whole thing but once, once the process had started of going to the local hospital, having various tests done and so on I went with the flow, there wasn't any point in not.

His GP advised him not to have a PSA test unless there were clear reasons for suspecting prostate...

His GP advised him not to have a PSA test unless there were clear reasons for suspecting prostate...

View topic summary
SHOW TEXT VERSION
PRINT TRANSCRIPT
You said your usual GP didn't encourage you to start with to have a PSA test?

He, he put it very plainly, told me the pros and cons but his advice was quite clear that unless there were clear signs of prostate cancer I should not have the PSA test, he did not think that I should have it done as an investigatory process.

Well I think he said that it's a bit of a blunt instrument, that it's not actually terribly good at, at predicting whether a man has prostate cancer. I think he went on to say that the investigations that might follow a PSA test were invasive and unpleasant and even if one had a PSA test and did have prostate cancer it might not be picked up by the PSA test and it might give a misleading impression that one did have prostate cancer when in fact one didn't. And the thing that he said to me, which in fact I'd already read was that a lot of men die with prostate cancer but comparatively few die of prostate cancer. And as I said to you right at the beginning before we started this I, I tend not to want a lot of investigation and that frankly if I got prostate cancer I'm not sure I would want to know because of this point that a lot of men die with it but not die of it. So it didn't seem to me to be worth investigation, particularly as my GP's advice was not to. Of course he left it entirely up to me but I went along with that.

A breakdown in communication led to him having the PSA test against his will.

A breakdown in communication led to him having the PSA test against his will.

View topic summary
SHOW TEXT VERSION
PRINT TRANSCRIPT
Some months ago I had what was clearly a urinary infection and I had to go to a local medical unit and they prescribed antibiotics. And then I went to the heath centre and my own GP was away on holiday and I saw another [laughs] GP who is not my usual GP and there was a clear breakdown of communication at that point because my impression of the conversation with him was that he was recommending, he was sending me, or requiring me to have a blood test but that he agreed with my GP that a PSA test wasn't required. When I turned up for the blood test I was very surprised, in fact I was shocked to find that he'd also put me down for a PSA test. I said to the nurse on duty that I wasn't happy about that because that wasn't what I thought we'd agreed but she was under pressure of time and I had the PSA test much against my will but I, I didn't feel I should just refuse although in retrospect I wish I had. Anyway I then actually wrote a letter to the health centre drawing attention to this quite severe break in communication and the fact that I thought I hadn't been treated with a great, with enough consideration. The doctor I saw rang up and said that he was sorry there had been a breakdown of communication but that he had intended me to have the PSA test but I have to say that's not what my recollection of that conversation was.

And that's when you had the PSA test without really wanting it?

Without really wanting it and without knowing that it was going to happen. I must say when I went into the nurse to have the blood test for the urinary infection to be told that I also had have a PSA test I found that extremely disturbing and I felt pushed into it and I felt that the nurse was, was under a lot of pressure of time, etc etc but afterwards I felt that I wish I said I'm not having this done without further discussion with my, the GP I saw. But in fact in, now because I had the PSA test and I've been told clearly I don't have [prostate cancer], but also I have to say that without that I wouldn't have come into contact with the Saw palmetto and so that is the enormous benefit. So now I'm very happy about the way it's worked out.

There was a breakdown of communication and it's water under the bridge, it now no longer matters.