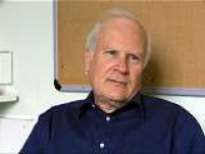 Age at interview: 63
Brief Outline: As a clinical academic who has been involved with screening for cancer in other sites, he felt he was in a good position to judge (when considering screening for prostate cancer) that the potential for harm outweighed the potential for benefit.
Background: Occupation' Retired professor of surgery. Marital status' married. Number of children' 3. Ethnic background' White British.

A surgeon explains that when a man consults a doctor with symptoms, a PSA test might be done to...

A surgeon explains that when a man consults a doctor with symptoms, a PSA test might be done to...

View topic summary
SHOW TEXT VERSION
PRINT TRANSCRIPT
' I trained as a general surgeon and for a while in addition to general surgery I was looking after urological patients so I know a little bit about urology. And if a man, say over the age of 50 presents with symptoms, which suggest an enlarged prostate, then part of the work-up of that patient would be PSA testing to exclude the possibility of cancer of the prostate.

Do you think that at that stage the man should be given information if the tests were to come back positive about possible treatment options in the future or not?

This man has symptoms and if his PSA is very high and he has an enlarged prostate then it is very likely he's got cancer of the prostate and we're more concerned at that stage about the current status of his health and the treatment there and then rather than consider what might happen in the future.

So you wouldn't necessarily discuss the future about the possible options if it turned out to be cancer, you wouldn't discuss that before he had his PSA test?

Are there any other circumstances in which a PSA test might be appropriate do you think?

With the current state of knowledge no.

Do you mind explaining why?

Perhaps I should qualify that. I've emphasised a gentleman above the age of 50 who has prostatic symptoms, there I suppose might be a rare occasion when a man like that presents with skeletal pain and bone scan or x-ray shows skeletal metastases then I suppose you could do a PSA to look for the source of the primary. It is quite uncommon but you can get metastatic prostatic cancer without the symptoms of prostatic enlargement. Beyond that I cannot think of an indication for PSA testing because we're then in the area of PSA screening and in my opinion PSA screening is as yet of unproven value.

Argues that it is irresponsible to advocate PSA screening for prostate cancer until there is...

Argues that it is irresponsible to advocate PSA screening for prostate cancer until there is...

View topic summary
SHOW TEXT VERSION
PRINT TRANSCRIPT
The principles of screening are based on the idea that you have a test which is simple and reliable and reproducible that can diagnose a common disease which is an important health hazard and as a result initiate treatment at an earlier stage as a result of which deaths from that disease are prevented. So screening by PSA should only be introduced when there are data that such screening stops people dying of prostatic cancer or at the very least improves the quality of their life.

I believe that those data are missing at the moment, we do not have the data to support the notion that PSA screening stops men dying of prostatic cancer. In the meantime though we have to be very, very careful in going down that route for a couple of reasons. Firstly elevated PSA can identify in situ or what I prefer to call latent prostatic cancer. If you do post mortems on men of say 80 who have died of other causes something like 80% of such men will have these latent in situ prostate cancers. You could almost argue that in situ prostate cancer is an inevitable consequence of the ageing process, therefore the detection of in situ prostate cancer as a result of PSA testing is not a triumph, in fact for many men it can be a disaster. It is highly likely that the vast majority of such cases detected would never have announced themselves in a man's lifetime.

Remember the numbers, 80% of men will eventually have in situ prostate cancer and yet how many men actually develop invasive prostate cancer in this country? I can't remember the numbers off the top of my head but it's something like 20,000, out of a population of 20 million so clearly it's a very small minority. And then what are the potential consequences of coming across these in situ cases? If you do nothing then you leave the man with intense anxiety, an obsessional checking and re-checking and if you do something what is the something? Well many urological surgeons, particularly in America, would advocate radical prostatectomy. Now that's a pretty big operation, a very significant proportion of such men will end up impotent and incontinent for a condition the majority of which would never threaten that man's life. So until we've resolved the issues of what is the natural history of in situ prostate cancer and there is a treatment that will prevent deaths from prostatic cancer I honestly think it is irresponsible to advocate PSA testing.

He finds it hard to be enthusiastic about screening when we don't have enough resources to treat...

He finds it hard to be enthusiastic about screening when we don't have enough resources to treat...

There's one other aspect of screening that bothers me and that is the issue of opportunity costs. Now the term opportunity costs means we have limited resources, how best to use them. The pressure for screening is a very popular pressure because of the somewhat naïve idea 'catch it early and you'll cure it'. I find it very difficult to be an enthusiast for screening when as someone who's worked for 40 years at the front line of the National Health Service and certainly the last 20 years in the front line of cancer services when we don't have adequate resources for actually treating patients with cancer to be trawling the well population to find cases when we don't have the resources to treat those that are already presenting with the symptoms.