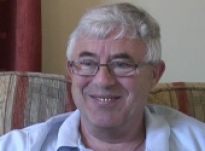 Age at interview: 62
Age at diagnosis: 57
Brief Outline: A series of PSA tests in 2004 while John was working overseas prompted a biopsy which did not indicate prostate cancer. However a later biopsy (May 2006) did indicate cancer and John returned to the UK for treatment. He had a radical prostatectomy in September 2006.
Background: John is a retired accountant, married with four adult children. Ethnic background is White Irish.

View topic summary
SHOW TEXT VERSION
PRINT TRANSCRIPT
There’s not much else I can say about the operation itself, per se or the follow up except that I had a little bit of difficulty in the outcome, in that the doctor came round one day and as it happened I was lying on the bed, with the blanket over me, he was quite startled by the fact that within days of the operation I was wandering around the hospital, albeit quite painfully, but I couldn’t sit still, didn’t want to sit still, couldn’t lie on a bed, didn’t want to sit on a chair, I was happy enough just wandering, but this particular day, I was, I had a blanket over me, which he didn’t actually react to initially, until a nurse went past and I said, “Nurse can I have that extra blanket please, I’m freezing”, he reacted immediately, and it turned out I had MRSA, so I did, so, we had a few problems clearing that up as well. I hadn’t a particularly virulent form, it just made it a little bit more difficult for things to clear up per se. Recovery, no particular problems with the recovery and the usual problems that you have post-operative, incontinence and all the rest of it, all cleared up as quickly as can be expected.
Previous Page
Next Page