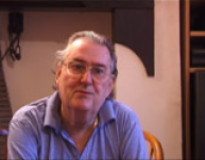 Explains the process and reason for biopsies.

Explains the process and reason for biopsies.

View topic summary
SHOW TEXT VERSION
PRINT TRANSCRIPT
Basically we have to say that anything anybody has heard of that's aged more than 5 years about prostate cancer you can really forget it. Unfortunately most GPs go back into 1970 with their knowledge so that's a bit hard. But the biopsy if under a DRE which is with a digital examination by your urologist, he finds anything wrong with the shape of the prostate such as it might be expanding to one side or both sides then almost certainly he'll want a biopsy. Now these days the biopsy is done by a probe, which has ultrasound capability so it's inserted rectally, and the doctor or the surgeon can see on the monitor exactly where the prostate is. At the end of the probe, which is you know to put it bluntly is just rather like a banana, it has got needles that under a little stab of air pressure can shoot out and grab a sample of tissue. And the objective is to take between 3 and 6 samples round the prostate itself and they can come out as little cores, in very find needles and be sent away to examine for what content there is.

The sad fact is if they don't find anything in there that's a very limited shot of 6 little stabs with a needle. And they're not massively painful, that are going to make you shoot out of the bed or scream in anguish, you're normally lying on your side and you sort of 'ooh,' it's about, I don't know 1/10th of the pain you'd get from having an injection for a tooth, if you put it on a relative scale, so it's nothing to be terrified of. And they will then take them away and examine those cores. Some places they will mark the cores on a clock face, 'Core 1 was at 12 o clock', others they just take the cores. In my case they didn't note where they'd come from but they did note that 3 of them had 20% cancer and that's what comes back. If they come back and say none of them had cancer it's a shocking thing to think you probably may still have it but they just didn't hit the 3 places where it was because the whole gland is not normally cancerous, it's areas of it.

Considers that treatment should be a personal choice and not affected by lack of public funds.

Considers that treatment should be a personal choice and not affected by lack of public funds.

View topic summary
SHOW TEXT VERSION
PRINT TRANSCRIPT
I really believe PSA testing and screening should be done, I really believe it. They jump up and down and say 'Why worry someone to death when we don't have an effective treatment for it?' Well why don't we have an effective treatment for it, basically because we haven't spent the money on getting it, it's out there, it's not the world's best treatment but the treatments are out there and available in America so back you come 'We don't have the money for it.' But the criminal thing in 1999 the actual funds given for breast screening were 3.8 million and the funds from the Government towards prostate was '47,000.'

I think anyone over the age of 55 should request a PSA test on an annual medical to see you know what it is and then take advice from there and hopefully in the next 2 years there'll be more information coming out on it in any case.

Describes his experiences of Brachytherapy.

Describes his experiences of Brachytherapy.

View topic summary
SHOW TEXT VERSION
PRINT TRANSCRIPT
Yes, no matter what happens with seeding or Brachytherapy the actual seeds have to come from America because the company that made them, although it was one of the big National Health companies many years back only makes the seeds in America. And there's two types of seeds, there's the palladium and there's the iodine and the iodine is half strength so it lasts longer but it is weaker. So to get the same radiation effect you say it's going to last twice as long. They had to be brought from America and when you've been surveyed and declared suitable for seed implantation one of the things they do is they, using the ultrasound, they actually measure the volume of the prostate and depending on the volume will depend on how many seeds they're going to require to put in it because the seeds have to go in at equal spacing across around and all over. And it's shaped like a walnut, in fact in America there are people who wear badges shaped like a walnut with a ribbon on to indicate that they are prostate people. But having worked it out and in my case it was 62 seeds that were needed they then sent to America who make the seeds and they then, the seeds then come back and you're given an actual booking and they only come over a day or two before.

How long did it take to get the seeds from America?

Well in my case it was, it was taking 2 months, it has taken longer sometimes I know but 2 months is a reasonable one.

What sort of seeds were they, which ones?

Mine were iodine seeds and they're the only ones that have been used in England, only ones I believe that still are used really in England for this permanent seed implantation. Now this is permanent seed implantation where they put the seed in and it stays with you for the rest of your life although it's, to intents and purposes it stops emitting the radiation after about week 53, the actual seeds, so it's a declining radiation from when it's put in.

Down to 53 weeks yes. The other higher density seeds definitely in 97 could not be imported under the laws of atomic materials so you could only have the iodine ones at the time I went forward for them.

Are the other ones also left in?

They're left in as well. There's a third, there's permanent implantation on one of the two isotopes, the iodine or the P and then there's the high density temporary one where they are put in for may be you know a couple of minutes and pulled out and the next day put in and pulled out again, that's a totally different procedure. And I know there has, there is one that has started up doing that in UK but at the time I had mine done there was only one and it was doing standard Brachytherapy and permanent implantation.

I must stress about the hospital where I did have the Brachytherapy done was that they're a total one off within all the NHS ones I've come across because they weren't NHS and the staff had no clue whether you were private or NHS in there, absolutely no clue, you were treated the same and you were treated brilliantly. And everything was explained from the minute you went in the door, absolutely everything was explained which was the first time it had been to me. And I was talking to an NHS patient in there and he was exactly the same, no difference...

(Laughs) well the seeds are implanted every - - - basically in the perineum. They're inserted on long needles.

Yes and you are, you're actually in a stirrup position
Previous Page
Next Page