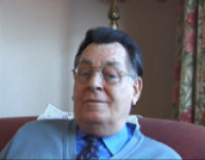 Reports that he had no problems or pains after taking Zoladex.

Reports that he had no problems or pains after taking Zoladex.

View topic summary
SHOW TEXT VERSION
PRINT TRANSCRIPT
The specialist said 'You've got prostate cancer,' and I knew nothing about prostate cancer. So I said to him 'What's the chances like you know?' and he just didn't answer because he said 'You're going to be fine,' he said 'just think positive.' So the specialist told me I had prostate cancer and he was going to give me injections every 28 days. I honestly can't remember what it is at the moment but I had an injection in the stomach while I was in the hospital and then every 28 days I went to the doctor. And it started in May 2000 the injections.

And I've had the treatment every month, every 28 days since then until I had to have a blood test every quarter, every 3 months I had a blood test to see what my PSA was. Now the PSA was, I think it's the magic figure of whatever they check in your blood system to see if that goes down it's good. Well I started off at 1.9 in May and then in September it went down to 0.6 and now December it went to 0.8 but it's nothing to worry about the specialist said 'I'll take you off the treatment for 2 months to see in fact if it's stable or whether it goes back up again. If it goes back up again in February I must start the treatment again, if it goes back up again.' I feel pretty good actually, no problems, no pains.