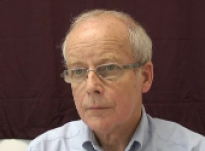 Age at interview: 68
Age at diagnosis: 65
Brief Outline: George was prompted by his GP to have a PSA test while at surgery for a cholesterol test. He was then referred to hospital for a biopsy the result of which led to a diagnosis of prostate cancer at end of 2007. He had a radical prostatectomy in April 2008.
Background: George is a retired material engineer in the oil and gas industry, married with two children. His ethnic background is White British.

And I never thought depression would have such a devastating effect, because, I could hardly talk to people, I could hardly get out of bed and I thought this just can’t go on like this, but it’s not just me who was suffering, it was my family because it’s a difficult, difficult thing to deal with, and you have to, your partner, in particular, is the person who suffers, and the person nearest to you, in this case, my wife, and how she dealt with this is, I just don’t know how, cos I would have found it very, very difficult, and she was very very patient, and I have to say again, the support of your family is absolutely of paramount importance, to get you though this difficulty, this illness, and it’s not a five minute process, it’s in every aspect of your life... but social occasions I would just avoid, because of this depression, and the depression was there because it was a prostate cancer.
And how long did it last for?
I’d say about three months, and that’s a difficult, it’s quite a long time.

View topic summary
SHOW TEXT VERSION
PRINT TRANSCRIPT
And I have to say that they were, the surgeon who did my operation must be a very, very, very skilled person because I have had no real side effects at all, apart from the gentleman’s department shall we say, about the impotence factor. I found that my libido did not really change, and I found that the physical side, well, yeah, well I have to say yes, that did change, because I think psychologically you’re in a very difficult fragile condition, a lot of men won’t admit that because it’s a macho thing, you know. The possibility is still there. Now I have Cialis from my own doctor, which I very rarely take, but I can, I still achieve erection, I wouldn’t say as often as I used to, and that’s understandable because I’m not in the first flush of youth, you’re still, you’re still a man and that’s an important factor to you, and the, one of the biggest problems, is, (laughs) this sort of dimension, the sort of size, now most men are, most men like to think the size is everything, but you’ll find that, in the type of operation I had, it tells you in the literature, that, the penis will shorten, and I have to say, I you do shorten slightly, but it’s of no significance really, you know, I’m now sixty, I’m now sixty-eight.
Do you suffer from impotence at the moment?
No, no.
So you haven’t had to deal with that?
I can rise to the occasion shall we say, but no I don’t suffer from impotence, at the moment, at sixty-eight, you’re not as sexually active as you were a few years back, you know, but in my case, I, again, I don’t want to give too much of my own personal life away here, but I’m happy if it helps somebody, don’t think it’s the be all and end all, it’s not, there’s the emotions there, emotions and I think it’s just as important to have affection, to your partner.
Previous Page
Next Page