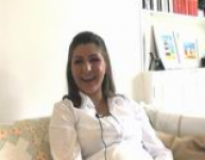 She would have liked more opportunity to talk to staff in the early weeks and needed reassurance...

She would have liked more opportunity to talk to staff in the early weeks and needed reassurance...

View topic summary
SHOW TEXT VERSION
PRINT TRANSCRIPT
And then I, in typical fashion, didn't get my period so I decided to take a pregnancy test and it came back positive. And so I called the doctor and said, 'I think I'm pregnant' and they said, 'You can come in if you want.' So I did, I went in and they said, 'Well, why do you think you're pregnant?' And I said, 'I took a pregnancy test and it said I was pregnant' and they said, 'Well, then you're pregnant' [laughing]. And that was it, they didn't want to talk to me or tell me anything. I kind of would have liked, I think, more information at that point because I'd never been pregnant before and I didn't know what I was supposed to eat or do or [laughing] anything like that. And then I talked to the GP again, just on the phone. They called me and said to call back, they would put me in touch with the midwife but just to call the midwife at around 12 weeks of pregnancy to make an appointment, assuming that the pregnancy lasted and that everything was okay, that I didn't have a miscarriage. So,

Were you surprised to be told that?

It was all so new, like I couldn't decide even whether I was supposed to tell my parents that I was pregnant or whether I should wait 12 weeks to do that. Or, it was, it seemed like the biggest thing that had ever happened to me but I didn't know what to do or where to go [laughing]. Emotionally I think it was hard. And of course I went out and bought a bunch of pregnancy books and I really, that was the way that I learned about things. Or the, the way that I scared myself and made myself feel better because, of course, the pregnancy books all talk about high risk of miscarriage in the first trimester. But they can also be reassuring. I mean they, it's nice to have information, I think.

Would you have liked to have more information from a midwife though?

Absolutely. I think it, it's hard to tell in books what is important because I think they try to cover everything, especially the things that can go wrong. You start to get the feeling that everything's going to go wrong in every pregnancy, and I think it would have been nice to talk to someone who could say, 'Yes, there are these terrible things but chances are everything's going to be okay.' I really would have liked to have someone talk to me [laughing]. In the end, I told my Mum almost right away and she was a great emotional support. Because she has 5 kids of her own [laughing] and has got through everthing. I mean, I think that was what I was hoping to get from a doctor or a midwife or something, just a little bit of that support and information.