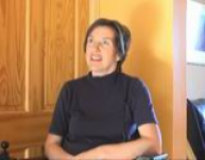 She never thought she would have children, but once she was told she did not have multiple...

Show in context
HIDE TEXT
PRINT TRANSCRIPT
Yeah, I mean we still didn't know what was wrong with me but it seemed [pause] a fairly reasonable decision between us that we would be okay to have a baby. There was also probably something about a biological clock in both of us that, that's when we took the decision that we did.

Mm. Yeah, because that's easy to say in advance, 'We won't have children.'

'We won't.' I mean we were fairly steadfast, not fairly we were completely steadfast for ten years there's never ever be children and our friends were getting married and saying, 'Oh we're hoping to have children.' We always said, 'Well, we're just not interested.' And we led our lives in that way, so lots of holidays, spending lots of money, no reason to save for a family because we weren't going to have one.

Mm, so it must have been quite a emotional turn around changing your minds about that?

Yeah, it from being told that it probably wasn't MS, to becoming pregnant was about two years and in that time [pause] there was a complete and utter shift from definitely not to definitely we will have a baby.

How did you feel in that bit while you were sort of going through that shift before you'd actually got to the point of being pregnant, were you feeling really excited, or anxious, or how did it affect you?

I think really excited because it felt like I'd got a second chance, that I was really going to grasp it. Because the fact that I'd felt that it was the wrong diagnosis in the first place, then it was still the diagnosis, it was still the label, whereas now somebody had said, 'No, it looks like it isn't that.' That I thought, 'Woah let's just go for it.' And we both felt that really.

I mean ironically, now I've had a baby and now I'm a bit older, then I'm probably much weaker than I was five or six years ago, but we're still hoping to have another baby because now we're, we're in the reality of it, then things aren't so scary. So I can't do as much with the baby as I would like to, but we've discovered that there are lots of ways round things, lots of creative ways of parenting and looking after the baby that we don't need to stop at one, we'll stop at two but we don't need to stop at one [laughs].

She could not attend NCT antenatal classes because her wheelchair did not fit in the teacher's...

Show in context
SHOW TEXT VERSION
PRINT TRANSCRIPT
It was difficult. I really wanted to go to NCT classes, and as much as to meet other people as to learn about looking after a baby, and I couldn't go because I couldn't fit into the house in a wheelchair, and I thought, 'Oh bloody hell, this is real discrimination, actually. I hate this.' So I was, I haven't really met many other mothers. That's probably one of the not very good things about being in a wheelchair and being a mother.

So you have lots of mornings where you can go and talk to people in the same position as you then, yeah I've got a couple of friends who had babies at the same time so we meet, occasionally, but as far as having a, a culture of young mothers, then that didn't happen.

So did the NCT make any efforts to try and get round that or was it just a no?

That was largely a no, really.

Mmm. So nobody said, 'Well, we could come and hold the class at your house' or anything like that?

No, no that would have been a good idea, no [laughs].

She was very sick every morning for about twenty minutes and then fine the rest of the day.

Show in context
SHOW TEXT VERSION
PRINT TRANSCRIPT
So it used to be, I used, when I used to sit up in the morning, I used to think, 'God I feel really sick.' But then I'd think, 'No, I'll be alright, I'll be alright.' I used to go to the bathroom and as soon as I started cleaning my teeth, so there's always that, you know, even now when I clean my teeth if I just hit the wrong bit then I think 'Oh bleh.' But this was, I used to just touch a point on my back teeth and that used be it for about twenty minutes, which is [laughs]... really horrible, and very different to any other time because it came from nowhere and then it would actually go to nowhere. I, well I used to think, 'Oh, that really didn't happen.' No, it definitely did happen, because it used to be every morning. I think that probably went on for about fourteen weeks.

How early did it start?

Did you find anything that helped?

No, because I think it was, it was kept in its place, in that it would be twenty minutes, half an hour in the morning and that used to be it.

So the rest of the day you'd be fine?

The rest of the day was absolutely fine.

Does it pose additional problems having something like that when you're in a wheelchair?

Having a physical disability herself made her feel she could not cope with a baby with a...

Show in context
SHOW TEXT VERSION
PRINT TRANSCRIPT
It's just that, it's really the talking to friends about, about tests that you can now have in pregnancy, to see if your baby is okay or not, then we were very certain that we'd have all the tests we could possibly have, because we knew absolutely one hundred percent, if there was any chance of that baby having any form of disability, that as a partnership we wouldn't be able to cope. So it always felt very harsh and like we were going for the perfect child, and anything less than perfect wouldn't do, but in reality that's, that's what it was like. We had to have a child that wouldn't need any extra care like I do.

Have you tried to talk to your friends about that?

Have they been surprised?

Have you felt that a lot during pregnancy and parenthood?

I think probably that I've got used to the fact that, you know, I'm a teacher, and I am in a wheelchair, but hey I've just got to get on with it, and that's the way it is, and there isn't a choice in this matter so just cope with it. And I think when you're pregnant you need allies and you need to think, 'Oh yeah, I, that happened to me as well.' Or, 'I know what you mean' whereas there was never really that [sighs], never really that comfort blanket really, for me, so I felt quite alone.

She had good practical advice from her local hospital and a support group for parents with...

Show in context
SHOW TEXT VERSION
PRINT TRANSCRIPT
When did you find out about the disabled parents support group that you were talking about?

There's a unit at the Disabled Service at the hospital that, that has a couple of qualified people who specifically look after disabled mothers, so I was able to go and try out some equipment, and they provided a beanbag that I could breastfeed from and yeah, I was able to hold this nine pound doll and put it back in the cot and I thought, 'Oh there's no way I'm going to be able to hold a nine pound baby, that's really heavy.' And they said, 'There is actually a network that disabled parents have started, so Disabled Parents International brings together parents from all over the world who are handling, being disabled and having children.' So that's actually been a great source of information, but there's also local agencies as well.

Mmm, but none of those organise antenatal support?

I think it's quite rare actually to be somebody in a wheelchair, and having a baby. There seems to lots of blind mothers, or deaf mothers, or learning disabilities, but the wheelchair seems to be quite unusual.

She felt she was an expert in her own condition, but when it came to pregnancy became passive and...

Show in context
SHOW TEXT VERSION
PRINT TRANSCRIPT
It was really, you know, knowing how I am and how I like to know about things, and how I like to be involved, and in control, and it's my life and I'll look after it myself, then I completely surrendered in pregnancy. And, you know, going into another pregnancy, then it will be different. I won't just surrender, because I know more about it and I know more about what happened to me after the first pregnancy so I will, I will be more thoughtful and more proactive.

Mmm. Just say a bit about you, your, what you were saying earlier about sort of being an expert in one set of conditions and then this sort of feeling of novice stuff.

Yeah, I don't know whether it was like symptom overload but I was quite au fait with what was wrong with me, and how that affected me and how I handled it, but then having other symptoms put on top which actually belonged to another condition called pregnancy, then that did seem like an overload, and I thought, 'No, no, these people know much more about it than me and I'm, I'll just let them get on with it.' But which is quite bizarre because it was actually happening to me whereas I let them handle it...

But I feel very strongly that it won't be like that again.

See, I don't know really how my situation could be sort of replicated because I am in shock still at how much I gave over to health professionals. And actually they're professionals but they're not experts in me, only I'm an expert in me. And I can't believe that I surrendered so much [laughs]. It really is a big source of surprise to me.

Especially when you are so used to being the expert in your.

Oh yeah, but then ironically I gave over to the professionals and then it all went really badly wrong.

Yes, because you said you were questioning that the Heparin incident?

I actually said, 'Are you sure I should have this?' And the nurse said, 'Yes, it says so in your notes.' But actually the notes hadn't been checked so I shouldn't have had...

And you knew that?

I did, but because I was still in my sponge state of just accepting things being done to me then I said, 'Okay.'

She and her husband love being parents and would like another baby. She wants family life to be...

Show in context
SHOW TEXT VERSION
PRINT TRANSCRIPT
Well, two years down the line we just absolutely love it and he's a constant source of joy and exasperation and, you know, just fantastic. But I, I don't want him to be sort of a trophy child as in, 'Oh you're in a wheelchair, oh isn't it nice you've got a baby?' 'No, I've got a family, actually.' That's what I want, a family. And because we have a lot of different people coming into the house, then I think it will be really nice for him to have a sibling, because the people will be coming into the house not specifically for him but to help me, or to help with the children, or to help with the cooking, and I want it to be a bit more normal.