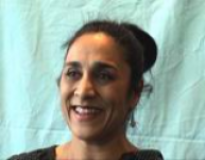 Age at interview: 37
Brief Outline: Her first, long awaited baby was stillborn at 25 weeks. Her second pregnancy was normal, but an accident at 20 weeks made it an anxious time. Birth was induced, with epidural.
Background: Children' 1, aged 7 months at time of interview. Occupations' Mother- project co-ordinator, Father- project director. Marital status' married. Ethnic background' British Muslim. Read by an actor.

It took fourteen years to get pregnant, but the baby had a genetic condition and was stillborn....

It took fourteen years to get pregnant, but the baby had a genetic condition and was stillborn....

Was this planned and waited for, this pregnancy?

Certainly waited for, yes. Waited a very long time, in fact waited - we've been married seventeen years this year, and she came after sixteen.

And had you been trying all of that time?

Yeah, we'd been - well, not for the first couple of years. Maybe after sort of like the fourth year of marriage we decided to try for a child, but it just wasn't happening. But then fortunately I did actually fall pregnant about two and a half years ago. And that, so that was after fourteen years of trying and I fell pregnant and unfortunately I lost my child at 6½ months.

So, I had a little boy, but lost him. And I just gave up then, because I thought, “Well, I've had one, it took so long to get pregnant and it's not going to happen again.” And she came by chance again - total, total miracle.

When she became pregnant again, they decided not to tell many people till they knew the baby was...

When she became pregnant again, they decided not to tell many people till they knew the baby was...

Well, I because we, we told everybody last time, I just didn't want to raise people's hopes up again, because our friends were as upset as we were. And, you know, I just wanted that reassurance from the doctors first before I broadcast the news to everybody. Obviously I told the closest people to me, like my mum and that, my mum and my family, they, they knew. But I was very particular about who I told. And I think a lot of people managed to then find out when I was about 5 months, the majority of people found out. They did, they were shocked because I wasn't showing. So that was good. That was the only way I could get away with it [laugh] yeah.

As a fitness instructor, she is keen to encourage pregnant women to continue exercising,...

As a fitness instructor, she is keen to encourage pregnant women to continue exercising,...

Well, it's what we're trained as fitness instructors for, as well, to give advice out, you know, and generally you've - I mean I don't, I don't get much with sort of like, say, the Caucasian women, English women. I don't have the problem with them. It's the Asian women, because part of my work is also to deliver classes and, and exercise classes to Asian women, and you generally, what I've found is that some of the Asian women who fell pregnant just stopped exercising. And I said, “Look, you know, unless your doctor's advised you not to exercise for any problems that might harm you and the baby, you're actually okay to keep going. It'll actually help, you know, in terms of getting back into shape afterwards. And even the, the delivery itself, will help, you know, in terms of having your muscles supple and strong.” And so I sort of kept it in mind that I would carry on exercising.

She would have liked more information that related to her religion and culture. (Read by an actor.)

She would have liked more information that related to her religion and culture. (Read by an actor.)

Don't be afraid to ask questions if you're pregnant - ask. Because, you know, if you're not sure about something, if you're scared to ask anything, just go and ask them. Even when things are not going to plan, in terms of what you've been diagnosed with as I was, you know, the first time round, then ask. Ask somebody, where do you go for support and help? I was given leaflets and things, you know, like when I lost the baby, but nothing that I felt was related to me in terms of my religion and culture. It was all, you know, the SANDS [Stillbirth and Neonatal Death Society] and what have you and things, but I didn't feel I could sort of like just ring them up. You know, you needed that push to do that. I didn't have anybody to push me to do that. I didn't have somebody saying to me afterwards, “Oh, look, you know, we're really sorry, and, and this, that and the other. And you must go.” I didn't have that care after, when I left the hospital. I was just sort of dealing with it myself, the first time round.

Feeling sick all day was horrible and she had to take time off work. Ginger ale helped a bit. ...

Feeling sick all day was horrible and she had to take time off work. Ginger ale helped a bit. ...

Well, I just, in terms of work I did take some time off from work, and I did inform my manager who, you know, confidentially - he said he wouldn't say anything.  So I did take some time off, but it wasn't actually, in terms of feeling sick, it was more the, it was the nausea, but I wasn't actually vomiting, but it was the feeling of nausea. And so I just said to people I had a virus and things and, you know, that was it, so I got away with it. But some people did start guessing, but I didn't sort of say yes or no to them.

Did you have the sickness in both pregnancies?

Yeah, I was fine.

So this must have come as a bit of a shock to suddenly?

Yeah, definitely [laugh]. Yeah, it was, yeah. It was horrible.

When did it start?

I'd say sort of like about, I don't know, 7, 8 weeks, 6,7 weeks, I think it did. And, and they did say to me that the, you know, a lot of the times it does disappear sort of like in your first, after your first trimester. And it did, it sort of disappeared after about 14 weeks, after 14 I was not so bad.

Was there anything you found that helped?

Oof, nothing, absolutely nothing. I couldn't eat, couldn't drink. My husband used to force me to eat things, but I'd eat bland things like - in terms of Asian food no way - things like sandwiches or something fizzy, you know, like, I don't know, ginger ale helped a little bit. Ginger, I was told about ginger and I thought, “Well, I'll try ginger ale and I'll try ginger biscuits and dry toast. I'll try anything.”

So it did help a little bit?

It helped a little bit, but I think the feeling of nausea is probably worse than actually being nauseous, in actually, when you bring it up it's not so bad, you know, it's out of your system. But when it's still in there and you're, you're just constantly feeling nausea all day, it's horrible, you can't do anything.

As Muslims they did not want a termination when they discovered their first baby had a serious...

As Muslims they did not want a termination when they discovered their first baby had a serious...

Hydrocephalus was one of the conditions, and a few others which they sort of named, sort of fluid round the lungs and behind the neck which is the hydrocephalus. And I think the condition they diagnosed it was arthrogry-, I can't say it now, arthrogryposis or something like that. It was a condition where basically they say that the water would hamper the development of the lungs. The baby was fully formed, but it may not live, it may not, may not go to full term. And even if it did go to full term, on delivery the baby would only live maybe hours, days and that's it.

So what did you decide to do at this stage?

Well, they offered me termination at 20 weeks, and I refused. 1) Because Islamically we don't terminate, unless it's going to be affecting my health, you know, which it wasn't, and 2) because we'd tried so long, I just hoped that, I was hoping for a miracle that, you know, things would be okay. But it didn't. I used to go, I was going for my scans after that, and then it was when I went for my antenatal check with the midwife at 24½ weeks she couldn't find the heartbeat and sent me down to the hospital. And I had the, the fetal, the consultant from the fetal medicine unit scanned me and said, “Your baby's heart has stopped” and that was it.

Yes, it was. But we had a little boy, so, you know. It's one of those things. Well, as you can imagine, we were obviously very, very upset, very distraught. But I think, you know, as a Muslim I have faith in God and you do always believe there'll be a miracle. Because I, because the baby was growing normally in terms of having two arms, two legs and a head, it was, it was the other problems that were genetic problems. Just even being, feeling that baby move was enough to keep me going, but it, the baby used to kick like anything, and that just kept me going. So I just, I was just really clinging on to hope, that's what kept me going. But it wasn't to be, so that's it.

So after that horrible experience did you stop trying or stop thinking about it?

I stopped thinking about it, yeah. I just thought, “Well, it's not going to happen.” We even actually contemplated going down the route of adoption, and so we were thinking about that at the time.

Being parents has made them stronger as a couple. Now they know what they had been missing. (Read...

Being parents has made them stronger as a couple. Now they know what they had been missing. (Read...

Well, I mean, I think we're stronger, we're definitely stronger. And both of us just look at her and just think “I can't believe she's here, she's ours.” He's just over the moon I think. My husband said that he'd like to give up work and look after her and I'd go to work full time.

In terms of kind of just having a baby, how has it made you feel about life?

Now I know what I was missing out on, because I'm thinking, “What did I used to do with my time?” And it was just work. Work, work, work, and that's it. But we know now what we were missing out on, you know, we've got the little angel.