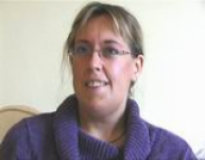 The Down's Syndrome Association was a really good source of information. The internet can give...

The Down's Syndrome Association was a really good source of information. The internet can give...

View topic summary
SHOW TEXT VERSION
PRINT TRANSCRIPT
The leaflets from Down's Syndrome Scotland were good. I mean I had been on the internet, but it gets very - you can either get sort of too much information that way, so [background noise]. Let me think, what else? I suppose, I don't know, I think my health visitor had looked after children with Down's syndrome before, but not necessarily recently, so I mean, I think, I think your average health professional probably hasn't had a lot to do with it and wouldn't know that much about it. But, and again, there's the specialist paediatrician which is, she seems to be very good. So that I mean, I think that I'd go - I'd have a specific question and go to the Down's Syndrome Association.

What do they offer you?

Well they've got, they've got lots of resources like books or videos or, I think they've got learning materials, and they've got sort of specialist workers who work with children or develop the curriculum in schools.

Can you just, what, ring them up and ask questions or ask for materials and things?

Yeah, or you can visit their office, and they've got a website as well, so I've looked at the website a few times, and I suppose that's the main, the main place. But I really think they're good and they give like a children's party at Christmas, you know, which is nice for them. They do some good things.

She felt under pressure to have an amniocentesis to check for Down's syndrome, but she did not...

She felt under pressure to have an amniocentesis to check for Down's syndrome, but she did not...

View topic summary
SHOW TEXT VERSION
PRINT TRANSCRIPT
Did you, was there a point at which you said to them, 'I don't want to have this because whatever baby I have, I will want it, and therefore, there isn't any point in me having any more screening'? Did you, were you that explicit about it?

I think I was just saying that I would, I wouldn't have amniocentesis, and I mean, they were giving me, saying that it was a 1 in 30 or a 1 in 50 chance, and it was, and I remember thinking to myself, 'Well, even if it was a 1 in 3 or a 1 in 4 chance, I still wouldn't want [laughs] amniocentesis' and they were there saying, 'Well, there is a very high chance of something being wrong.' I suppose it's a personal perception of what you do, but I mean, I suppose as well as that, with what I know now about Down's syndrome, it's as if, [pause] they, they don't tell you any of the positive aspects about Down's syndrome before you have the tests, it's just, 'Well, this is something which can cause learning difficulties' and people obviously have a stereotype of what that means, but there is no positive information at all at that stage, whereas I would say now there is, a you know, a huge number of positive things about having a child with Down's syndrome.

So by implying that it's such a negative thing, and it's such an awful thing that it's worth taking a chance of, you know, miscarrying a baby from the amniocentesis, it's [pause] multiplying whatever stigma is there already, about a medical condition. Because that's really what they're saying is, 'We've balanced the risk against the risk of miscarriage from amniocentesis, so the trade-off is, you know, it's the same as having a dead baby', which is just, you know, which I don't really see that as an acceptable thing, or that it's an acceptable thing that as a society we should be saying that somebody with a disability, their life isn't worth anything.

Because that's almost where it's going at that early stage, and there's lots of positive things about people with disability, and I suppose that having had [daughter], having had my daughter, there's a lot of support available for her as well, and I'm actually very surprised at the amount of, you know, positive support and help or whatever, that she could get if she needed it, and I think that should probably be made clear at an early stage. I mean, I suppose I might now take the view that I suppose people should be able to, to have the tests if they want them, but I would see it as quite a fascist thing to do, to get rid of a baby just because it has some degree of disability, but it's getting into all sorts of ethical, a complicated ethical area about, you know, what's the worth of a life, and why is a, you know, even if somebody's life, I mean, with Down's syndrome the life expectancy is more or less the same as everybody else's. With Spina Bifida it's sometimes a bit less, but that doesn't make that life worth any less.

Some medical colleagues disapproved of her choice to continue the pregnancy. Doctors should think...

Some medical colleagues disapproved of her choice to continue the pregnancy. Doctors should think...

View topic summary
SHOW TEXT VERSION
PRINT TRANSCRIPT
Do you, have you had any feedback from either, you know, explicit or implied from medical colleagues who think that you made the wrong decision?

Well, I've, I have to say I think that most people will be a bit sensitive about it, but I've certainly had one person say, 'Oh, you didn't go ahead and have an amniocentesis, and you're a public health doctor' with surprise, as if I should have, but I mean I'm sure there's other people who think that and know not to say it. [pause] And I think that's something that I do find a little bit difficult, because I know people who are, some people think they should be trying to increase the rate of people having tests and the screening, and I don't think they really understand the extent of the decisions that are involved. It's not like your other kinds of tests where you can argue that it's definitely a good thing for everybody to do it, it's not the same as that. I don't think they've quite grasped the full ethical implications of what they're actually proposing.

I think it would be about you should have a positive view of people with a disability [pause] and that if people are going to go down the route of having screening and terminating a child, I think that would be justified if the people concerned had views that they completely didn't think they'd love the child or couldn't cope with a child with disability, as opposed to just 'we want a designer baby that's perfect', which seems, it seems to be the idea that such a thing pushes it as far as possible - if it's, if it's not perfect, it's no good.

And it's a bit of a contrast, because you've got the medical successes with premature babies surviving, some of whom are very disabled and that's, I mean, the survival of premature babies is definitely a success, with some disability with it, but a child with Down's syndrome can be much less affected than that, and yet people are saying this is something that this life may not be worth living, so statistically we think it's a good thing that you should do something about it. I mean, it's just having a bit more thought about the whole issue.

It helped to meet other families with children with Down's syndrome leading happy and fulfilling...

It helped to meet other families with children with Down's syndrome leading happy and fulfilling...

View topic summary
SHOW TEXT VERSION
PRINT TRANSCRIPT
And I took her along to the - there's a mother, there's a mother and toddler group for Down's children, just near where I live, so I took her along there when she was maybe, I don't know, maybe three or four months old, so I did go and see the other, the older kids with Down's syndrome, so it was kids up to about 5, and that, that was really really helpful, because these other kids were just running around like ordinary children. I mean, sure, they're a little bit delayed in what they do, some are affected more than others, but I remember going there and there was a little five year old, and her mum said that she went to ballet classes and that she was starting at the local primary school. I think I remember just being completely floored that she was going to ballet classes, and that a child with Down's syndrome could do that. But that, that was just something really positive, I remember, because you, I suppose you think that you might not be able to, you know, take your child to things like that, but the fact that this girl was going, just was really good. And I mean I think you could tell that her speech wasn't as good as you'd expect for their age, but I mean, apart from that, it just looked like lots of happy kids playing around, and their mums were very nice and very supportive.

I suppose I remember one of them telling me how she, she'd had an amniocentesis and the doctors had told her that they could get rid of this problem, and that she had just said, 'This is a baby. What are you talking about?' And, you know, just thought the whole thing was horrendous. But things that people, I suppose people who do have Down's children, I mean, the parents they are quite accepting of their children, and they're from every, you know, there's some younger mothers there, some older, and there's some from obviously poorer or better off backgrounds, so - I mean, I suppose you get the people going there who are kind of more well adjusted or whatever, but, you know, they all love their children, the kids were doing fine and were playing with their brothers and sisters and doing well.

And of course you get to hear from the other parents what sort of questions to ask, and who should be coming to see you, and should you get a speech therapist, and what should they be doing [laughs]. You get a lot of that kind of support, so, and again, that's, that's been really, really good.

Having a baby with Down's syndrome has made her value people more, regardless of their status or...

Having a baby with Down's syndrome has made her value people more, regardless of their status or...

View topic summary
SHOW TEXT VERSION
PRINT TRANSCRIPT
Well, I think, well, first of all, they're a human being, just the same as, you know, any, anybody else, who'll have a full life span and be able to participate fully in society - well, you know, to their ability. So they're great, you know, they're great, the kids are great fun, they're sociable and lively, and usually quite contented. [pause] I mean, I think as well, it makes you value people more, regardless of their, you know, status or wealth or achievements, because, you know, everybody has the same, has the same basic rights, and the fact of having ability that's maybe a bit less than you'd expect, doesn't mean that their life isn't worth anything.