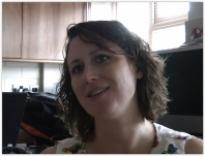 Age at interview: 36
Age at diagnosis: 36
Brief Outline: Vicki took part in the BUMP study during her second pregnancy.
Background: Vicki is a finance manager, married with two children.

Vicki had high blood pressure a few days after giving birth and returning home with her baby.

Vicki had high blood pressure a few days after giving birth and returning home with her baby.

View topic summary
SHOW TEXT VERSION
PRINT TRANSCRIPT
So he was delivered at 38 weeks, he was big enough, no no problems there. I came home a couple of days later, everything seemed to be fine and then I think it was on day five, he had actually developed a little rash and I think, you know, first time mum, really quite worried about it, thought we will pop down to, our midwives do a drop in clinic. So I popped down there and I had a splitting headache, which I’d had for two days but, as I mentioned, you know, as a migraine sufferer, that’s quite normal for me and I thought it was the stress of having a new baby, trying to breastfeed, everything like that and that’s what I put the headache down to. And, while I was sitting in the waiting room, I had to rush off and be sick and that’s when I thought, you know, oh dear, this is this is quite normal with a migraine as well, to be sick.

And then I went and saw the midwife and she said, “Are you okay?” And I said, “No, I haven’t been feeling well.” And when she took my blood pressure, it was the highest that she’d ever taken and I think it was up in the 210s, 150, or 130 or something like that. And so she was, you know, instantly, “You need to lie down. You need to get on your left side. We need to call an ambulance.” And I was rushed back into the [hospital] again. So yeah, and then, you know, they just monitored me. They put me on labetalol and more blood pressure medication, that kind of thing.

You know, like when it was going to go off again, kind of thing, although the consultant had said to me that if it happens in your first pregnancy, there’s only something like a 40 per cent chance of it happening in your second because your body is more used to it. So I had to try and, you know, remember that as well and I think, you know, my sister having really bad pre-eclampsia after my first son was born, I think that made the family more anxious as well, you know. I don’t think they really fully appreciated, you know, what could happen.
Previous Page
Next Page